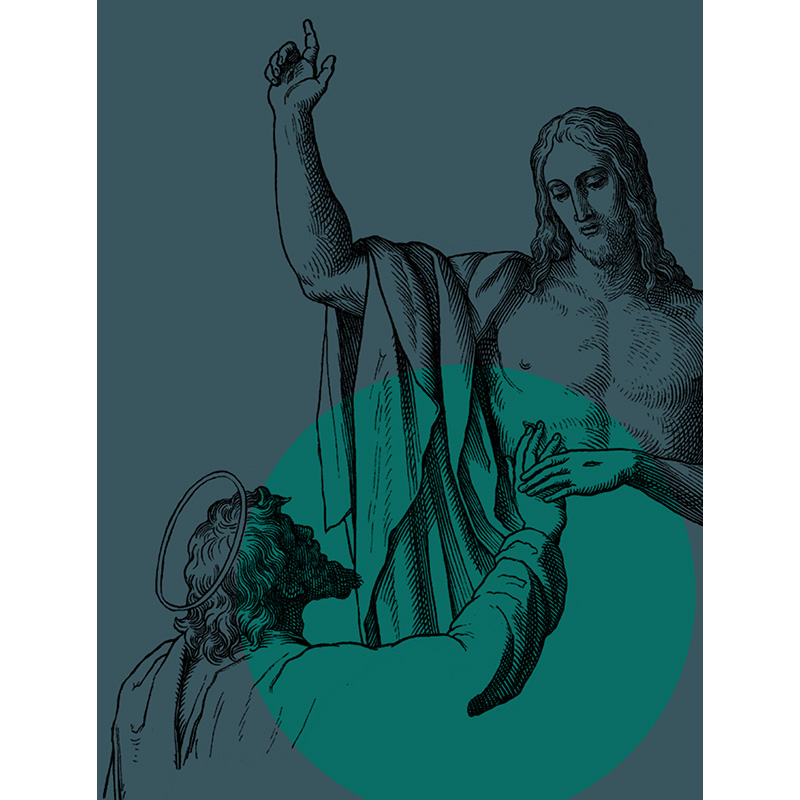 It was evening of the Sunday Jesus rose from the dead, and the frightened disciples were holed up behind locked doors.

Suddenly, though the doors were locked, Jesus stood among them. “Shalom,” he greeted them. And then he showed them his hands and his side, scars and all, evidence that it was indeed him.

After that encounter, the euphoric disciples couldn’t wait to tell Thomas, who wasn’t with them that night.

But upon hearing the news, Thomas was hesitant, uncertain.

I can relate to Thomas. He’s frequently called “doubting Thomas,” but I don’t think he was a skeptic. From what little is written about Thomas in the Gospels, he strikes me as a “data” guy—he needed data to make a decision. And someone coming back to life and being able to pass through locked doors . . . well, deciding to believe that is going to take some data!

I was in grad school, working on my master’s in theology at Cincinnati Bible Seminary, when I experienced my “crisis of faith.” I was confronted by so many questions and so many differing perspectives that I began to wonder if maybe it was too much of a muddled mess to sort out. How do we know what really happened? Can we be sure?

Doubt began to cloud my confidence in Jesus. Like Thomas, I wanted to believe—after all I was studying theology and preparing for a life in ministry!—but I needed data to be certain.

Thomas went to bed that Sunday night uncertain . . . not ready to believe.

I imagine the other disciples tried to assure him based on what they had seen. I can hear Peter, John, and perhaps Mary all sharing their testimony of seeing Jesus. “It was him, Thomas! It really was. He was here. We touched him and talked with him.”

But Thomas wanted more than their testimony; he wanted to see for himself.

And graciously, Jesus humored him!

Sunday arrived again, a week later. The doors were locked . . . again. And this time Thomas was present.

And once again, Jesus showed up.

After greeting everyone, Jesus approached Thomas and invited him to see and touch and know that it really was him. “Reach here with your finger, and see My hands; and reach here your hand and put it into My side; and do not be unbelieving, but believing” (John 20:27).

That was what Thomas needed. “My Lord and my God,” he confessed (v. 28), and Thomas believed.

Sometimes we fault Thomas for wanting to see instead of just “having faith,” as if believing is different from and superior to seeing. But the apostle John didn’t think that way. In fact, seeing is a major theme in his accounts of the resurrection:

And Chapter 21 emphasizes Jesus appearing to them again and John himself being an eyewitness who gave his testimony to these things (21:24). Not only that, but John opened his first letter by emphasizing he was an eyewitness to Jesus (1 John 1:1-4).

Seeing is not contrary to believing. In the case of John, Thomas, and the others in that first group of disciples, seeing led to believing.

But not everyone can have John or Thomas’s experience of seeing the resurrected Jesus.

That’s why immediately after recounting Thomas’s story, John paused his narrative to say he provided his eyewitness testimony to Jesus so those who read it will believe (20:30, 31).

Believing on the Testimony of What Others Have Seen

The “problem” with Thomas, if there was one, wasn’t that he wanted to see, but that he had the opportunity to believe on the testimony of others who had seen, and he wasn’t willing to do that.

That’s why when Thomas confessed his faith in Jesus, Jesus responded saying, “Because you have seen Me, have you believed” Blessed are they who did not see, and yet believed” (John 20:29).

In other words, most people aren’t going to be in the unique position you are, Thomas. They aren’t going to have the opportunity to see. They will have to trust the testimony of others to believe . . . and they will be blessed for doing so.

And that’s why John told us right at that point in his Gospel that he was sharing his testimony so we might believe.

It’s on the testimony of people like John, Peter, Mary, and even Thomas that most people have become believers.

And that brings us back to my season of drift in grad school.

When I showed up on campus at CBS, I was fresh out of Bible college and my faith was strong. CBS was a conservative seminary, so I certainly wasn’t expecting to find myself in a fog of doubt.

But it happened, and Jesus didn’t do for me what he did for Thomas. He didn’t suddenly appear to me behind locked doors. He provided no miraculous vision.

Throughout history, Jesus hasn’t done that for most people. Instead, most of us get what Thomas initially got: the testimony of eyewitnesses.

And we must decide if we trust them.

So after months of internal wrestling and confusion, I got out a piece of notebook paper and began to answer this question: Why am I a Christian?

The only answer I have for that question is the same thing that convinced Thomas: Jesus rose from the dead!

Like Thomas, I needed data. And all the data I had pointed in one, and only one, direction—the eyewitnesses were telling the truth. The tomb was empty, and Jesus appeared to disciples afterward.

Thomas’s story is even part of the data.

So I wrote my reasons for believing on that paper, and when I was done, I felt like Thomas after Jesus appeared to him. I had the clarity I needed. There is simply no other explanation that accounts for all the facts except that Jesus was raised from the dead!

I believed because Thomas saw . . . and John saw, and Peter and Mary and all the others who were there saw on that first Easter Sunday and the weeks that followed. Their eyewitness testimony was enough.

And so, I could enjoy the blessing Jesus promised for believing on the basis of their testimony. And you can too.

The fog had lifted, and, like Thomas, I could say with confidence, “My Lord and my God!”

John Whittaker has been a pastor in two churches and taught New Testament, theology, and preaching at Boise Bible College for 19 years. Currently he’s equipping people to follow Jesus by creating podcasts, YouTube Bible studies, and online courses to help people learn and live the Bible.