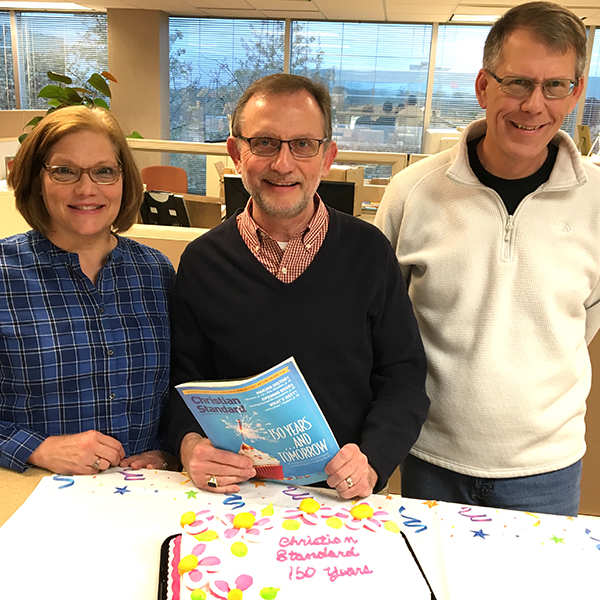 Christian Standard managing editor Jim Nieman reflects on the four editors he has known and worked alongside.

My transition from newspaper journalist to Christian Standard managing editor came about unexpectedly almost 20 years ago. Three editors of the magazine played roles in making it happen . . . and I am glad they did.

Because of my unique perch and perspective, new editor Mike Mack asked me to share my insights into these gentlemen.

I’ve been managing editor for the last three editors of the magazine, but a man I never worked for, the editor who preceded those three, the late Edwin Hayden, who served from 1957 to 1977, is the one I knew the longest. I can’t remember when we met; I was just a baby and he was about 50 years old. We went to church together.

When Mr. Hayden moved to Cincinnati from Joplin, Missouri, to become editor of the magazine, he soon made his home at Lockland Christian Church.

I’m told elders at our church were a bit sheepish about inviting Mr. Hayden into leadership because church bylaws required a new leader serve as a deacon before being considered as a possible elder. (Would Mr. Hayden be insulted?) Finally, an elder approached Mr. Hayden to discuss the matter. Mr. Hayden, always the gentleman, resolved any concerns: “It would be an honor to serve as a deacon,” he said.

My father, who served as an elder with Mr. Hayden for years, told me he was always a bit intimidated when called upon to substitute teach for the Men’s Class, as Mr. Hayden would be in the audience. But, my father said, Mr. Hayden was always gracious, and a good listener, and a good participant, with such comments as, “There’s also another way of looking at this passage . . .”

Perhaps my favorite memory of Mr. Hayden is when the church re-created first-century Jerusalem for a Vacation Bible School, and Mr. Hayden, a small man (but a giant of the faith), strolled the grounds as Zacchaeus.

One of the nicest things anyone has ever done for me is when Mr. Hayden—unbeknownst to me at the time—recommended me to Mark Taylor, who was publisher at that time. I was looking for a job with work hours that would allow me to be a better father to my young children. Though Mark didn’t have a position that matched my skill set, he worked to find one. Donna Fehl, who had served with Christian Standard for 25 years, was willing to transfer to the VBS department to open a position for me.

Editor Sam Stone (editor from 1978 to 2003) also had to agree to the change. We met at his favorite restaurant for lunch one day. After that lunch together, Sam told Mark he was willing to bring me on.

Under the agreement, as it still exists, I believe, I am not responsible for the biblical/theological content of the magazine. That is not to say I don’t weigh in on such content every day, but as managing editor I am not ultimately responsible for it.

Sam was, is, and always has been a gentleman in the same vein as Mr. Hayden. Some people would be surprised to know—but not shocked upon reflection—that Sam lived in Professor Hayden’s house for a time while a student at Ozark Bible College. I’ve always thought of Sam as a taller version of Mr. Hayden.

I can still picture Sam jumping up to offer a chair to guests who might stop by his office at Standard Publishing on Hamilton Avenue in Cincinnati. If the guest were a first-time visitor, Sam would ask them to sign his guest book. In all likelihood, he would already have slipped on the blue blazer he kept hanging on the coatrack in his office.

When we needed to meet as a staff in a semi-formal fashion—there were only three of us, after all—Sam would always bring pastries or something his wife, Gwen, had made. (Deep down, I don’t think he liked meetings, and he knew I didn’t like them. The pastries seemed to make meetings more palatable.)

I never saw Sam fly off the handle. He surely could have at times, but he always kept his cool.

One time a phone caller, unhappy with hearing “the truth spoken in love,” said something deliberately insensitive—he questioned Sam’s integrity, I believe—and Sam straightened in his chair and raised his voice ever so slightly, “Now wait just one minute.” But that was about it.

Sam seemed to have a dual role: magazine editor and statesman. He spent as much time out amongst the churches and colleges and at conventions and other gatherings as he did in the office.

I was leery of Sam’s retirement; I wasn’t sure how things would work out with Mark as my boss. I’m happy to report, things worked out very well.

Mark Taylor (editor from 2003 to 2017), upon being named editor, more fully took the reins of the production process of the magazine. His was a more hands-on style, especially with regard to design and illustration of the magazine. That was a good thing. We redesigned the magazine three times under Mark’s leadership, and it got better each time.

When Mark started as editor, I don’t know that he was entirely sure of my abilities, but after a year or two, he entrusted me with a major duty: first-edits of all articles. I also took on the lion’s share of duties related to Christian Standard’s website and digital newsletter. It’s good to be trusted, but Mark wanted me to earn that trust. That was fair.

The amount of change Mark had to contend with was staggering. In addition to the website, newsletter, and redesigns, he had to deal with two changes in ownership; five presidents; a move to a new building; diminishing investment by parent companies (until this most recent change); marketing department fluctuations; unreal expectations; unwarranted criticisms; an aging readership; challenging church, societal, and technological trends; production and printing changes; an extremely poor decision by higher-ups with regard to a new in-house commerce and fulfillment computer system; and, toward the end of his tenure, more than a year when Christian Standard and The Lookout were basically in limbo after the majority of Standard Publishing’s assets were sold to David C. Cook.

Mark would attend meetings, learn grim details, and then almost invariably present the best possible outlook for what it could mean going forward. Don’t get me wrong: he is a realist, and the staff serving him were realists, but it served no purpose to wallow in self-pity. He is a firm believer in God’s bigger plan being at work. Our job was to remain faithful (though it didn’t mean the staff couldn’t occasionally vent).

Our insulated group of six to eight folks would go out to lunch for birthdays, and Mark would always treat the birthday boy or girl. We would go out for a Christmas luncheon (Mark’s treat), or Mark and his wife, Evelyn, would have the staff and their spouses over for a meal. (I’ve always admired the Taylors’ gift of hospitality.)

Mark wasn’t so accommodating of folks with a penchant for complaining or callers who would waste time with frivolous conversation, but he would listen long and earnestly to friends and acquaintances who were genuinely distressed, be the problem large or small.

I am indebted to Mark for one other thing. Twice he has sold me used cars: one for my son while he was in college and one for my daughter before she headed off for out-of-state graduate school. “You’ll have to let me know what kind of car you might be interested in buying next, before I go buy a new one,” he once joked. (Mark would be a used-car salesman you could trust.)

And that brings us to Mike Mack. What can I say about Mike? Perhaps this: The jury’s out.

No, in all of my dealings with Mike, he seems to be cut from the same cloth as his predecessors who served as editor of Christian Standard.

Kind and considerate—there is no doubt. Upright and faithful—most definitely. Focused on doing a good job in this new role—yes!

It has been a joy knowing them and working with them.

Jim Nieman has served as managing editor of Christian Standard since 1998.