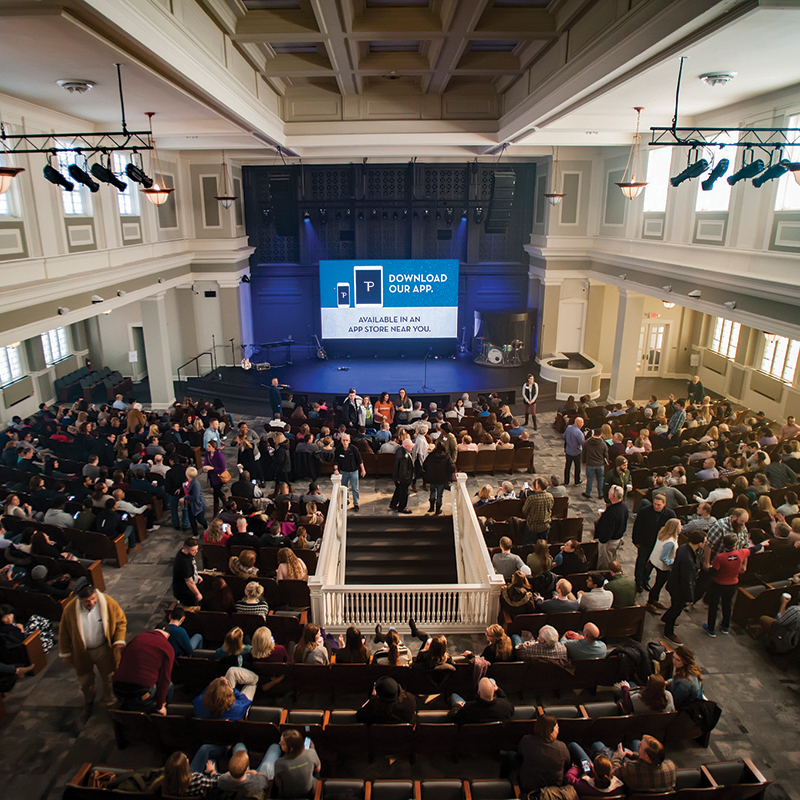 Six years ago, I wasn’t sure how I felt about multisite. I wanted to believe the best about all the hype I had heard about becoming one church meeting in multiple locations, but I didn’t want to throw my support behind it prematurely. I especially didn’t want to lead Traders Point Christian Church in this direction if we hadn’t clearly established the “why” behind it.

I believe God calls every church to multiply (Acts 2), however I don’t think this means every church should become a multisite church. (The many reasons for this lie outside the focus of this article.) The leaders of our church needed to investigate all the reasons why we shouldn’t do it before ever considering if we would. After an extended season of prayer, research, and conversations with the right people, the “why” for us became extremely clear.

We formulated it into this statement:

“We believe discipleship works best when you can worship
within a 20-minute drive from where you live.”

We aren’t interested in attracting consumer attendees for the sake of gathering larger crowds on the weekends. Instead, we want to remove barriers that keep people from Jesus. We believe he’s the absolute best at changing someone’s life, so we’ll let him do it! We saw geographic distance as a barrier to this.

We already had hundreds of people driving more than 20 minutes to our original location, but we wanted to equip them to be “on mission” with us where they worked and lived. That wasn’t happening, or at the very least, it wasn’t happening effectively. Therefore, we sensed God moving us to become one church that met in various locations around our city . . . every part of our city.

Asking the Right Questions
We quickly identified a few geographic areas where people lived who were already driving more than 20 minutes to our facility. The first two were both in northwest suburbs of Indianapolis that had similar cultural dynamics as our original campus. But one geographic region surprised us in the best possible way. We had a sizable group of people living in urban Indianapolis. They worked and lived downtown, but were making the 25- to 30-minute drive each weekend to our location in the burbs. We were ecstatic because we love our city! However, we knew our urban attenders’ friends, neighbors, and coworkers most likely wouldn’t be willing to make that same drive, nor should they. We needed to go to them.

Traders Point has helped plant churches in New York City, Harlem, Chicago, Miami, Austin, Paris, Las Vegas, and Los Angeles over the past few years. These are all world-class cities. We’ve learned so much about the dynamics of urban church planting by having staff members serve on the management teams of several of these new church plants. Now this question was in front of us: What about our city? We knew how to do church in the burbs, but would we be able to pull it off in the urban context of Indianapolis? We weren’t sure, but we were compelled to find out.

We faced many questions. Where would we meet? Would video teaching work? How would we do groups? What would local outreach look like? How would the people respond to our music? Do deep V-necks and skinny jeans translate? We reached out to other downtown churches to glean from their experiences and insights.

A few things became apparent. For a multisite campus to work within the urban context, we would need a campus pastor with our DNA and a love for our city, which meant he would need to move into the neighborhood. We found all those things in Petie Kinder. Petie had served on our staff as a student pastor and had overseen a department for us. He had previous church-planting experience in the Seattle area. He’s a proven leader and gifted communicator. Most importantly, he loves Jesus and has a passion for introducing him to people who don’t have it all together.

Petie and his family bought a house downtown and moved in. Many of our leaders followed his example and moved into the city, if they weren’t living there already. We thought this was vital for the success of our downtown campus. We couldn’t just drive in from the suburbs. We needed to be in the city doing life alongside the people we were called to love and serve.

We also knew we had to approach everything with a teachable spirit. If we came off as the “megachurch from the suburbs who came to rescue the city,” we would quickly be written off and escorted to the curb. We couldn’t pretend we had everything figured out just because we have been effective in other parts of Indianapolis. We had to ask questions and listen more than we talked. We had to have a long-term commitment to this, regardless of how slow or difficult it might prove to be. We wanted those living in urban Indianapolis to see our message, love, and commitment, and not just our good intentions. Downtown dwellers needed to see us demonstrate the gospel message on the street before they would ever be willing to hear us articulate it from a stage.

Facility Decisions
The next big decision was whether we would purchase or lease a facility. Finding a theater, school, or warehouse to lease felt less risky, but we couldn’t shake the conviction that if we played it safe, we wouldn’t be fully trusting God to do what only he can.

Prayer and discussions among our leadership and elders kept landing on the same thing: We needed to trust God to provide a permanent facility. It would convey the right message. We wanted the downtown community to know we care about the needs of the city and are committed for the long haul. We scoured downtown looking at theaters, warehouses, office complexes. . . . Nothing was ideal. As one would expect, city center real estate is at a premium. That we could find no viable option for a permanent home was deflating to say the least.

I vividly remember the afternoon leadership was meeting to discuss options. The conversation wasn’t very inspiring. We were trying to decide whether we should move forward without a facility or wait until we could secure a space before announcing plans to launch a downtown campus to the rest of the church. Someone (I wish it had been me) said, “It’s time to put up or shut up. We can either sit around and wait for the perfect circumstances or step out in faith and trust that God will provide the facility.” I love our church. It’s that kind of spirit and perspective that makes this journey so exciting!

We decided to announce our decision to start a site downtown even though we had not lined up a facility . . . and then we prayed. And God showed up . . . big time.

We found a 34,000-square-foot facility for sale, visible from one of the major interstates that runs through the heart of downtown. It was built in 1912, in excellent condition, and was occupied by Jehovah’s Witnesses. It had been on the market for a few years. We had our eyes on it earlier but walked away due to the $2.8 million price tag. I wish I had time to tell the story adequately. In short, a generous family in our church offered to give the entire amount for the church to purchase the building! I still can’t wrap my mind around it. We bought the building in June 2016 and immediately began renovating it to make it our first urban multisite campus.

The Vitality of Diversity and Authenticity
We had about 320 people jump in to become part of the core of our downtown campus. All of them have a huge heart for our city, and because of that, we have seen high levels of ownership and leadership in every area of ministry. People want to take on responsibilities and take ownership, and not just be assigned tasks. Just a few months ago, in February, we had our first services in the newly renovated facility located at 1201 North Delaware Street; 1,600 people attended and 42 people were baptized! We were blown away! The energy and enthusiasm were amazing.

We saw an incredibly diverse group of individuals (young, old, married, single, black, white, Hispanic, Asian, college students, professionals, homeless) come together to serve, worship, and learn. I love hearing about the refugee family from the Congo who had just moved to Indy who now serve as door greeters, and the man who just served a 10-year prison sentence who is worshipping each weekend alongside young professionals. Now, four months in, attendance has settled in at about 1,000 people across three services.

The atmosphere at our downtown campus is electric. When a diverse group of people who are genuinely excited about Jesus shows up in our worship and facility, the enthusiasm is attractive, even to those who don’t yet believe. They see the difference Jesus can make, and it’s compelling.

We have been very intentional with the environment of our downtown campus. It feels urban, and you can also tell that it’s Traders Point. Our services aren’t all that different from what we do at other campuses. The worship teams rotate to each campus, we do the same songs, and the sermon is via video from our Northwest location. Our campus pastors preach live about 12 times a year. We’re still learning. We’re finding authenticity is a currency that goes a long way within an urban context. If you preach and teach to the brokenness that can be found in all of our lives, you can be sure you will always have an audience.

Staying Focused on the Gospel
There will always be people who don’t understand, don’t want to understand, or simply won’t like your church and what you’re attempting to do. Most of the people around us have been very welcoming and receptive to what we’re trying to do, even if some of them have yet to attend a service. We’ve had people write blogs and newspaper articles that have not been kind, supportive, or accurate. Most of our critics spoke up before we had even launched the campus. Much of what they said was unfounded. We have learned from some of it. It’s to be expected, and we must be humble and loving in the way we interact and respond. It’s given us plenty of opportunities to try to clarify their misunderstandings of what the church really is, and more importantly, what the gospel really means.

We’re praying, listening, and learning how to best serve the communities and neighborhoods of our city. It’s been an amazing journey, and we believe there is much more God wants to do in and through our city!

Aaron Brockett serves as lead pastor at Traders Point Christian Church, a multisite church in Indianapolis, Indiana. He and his wife, Lindsay, are passionate about seeing people all over the Indianapolis area come to know, trust, and follow Jesus.