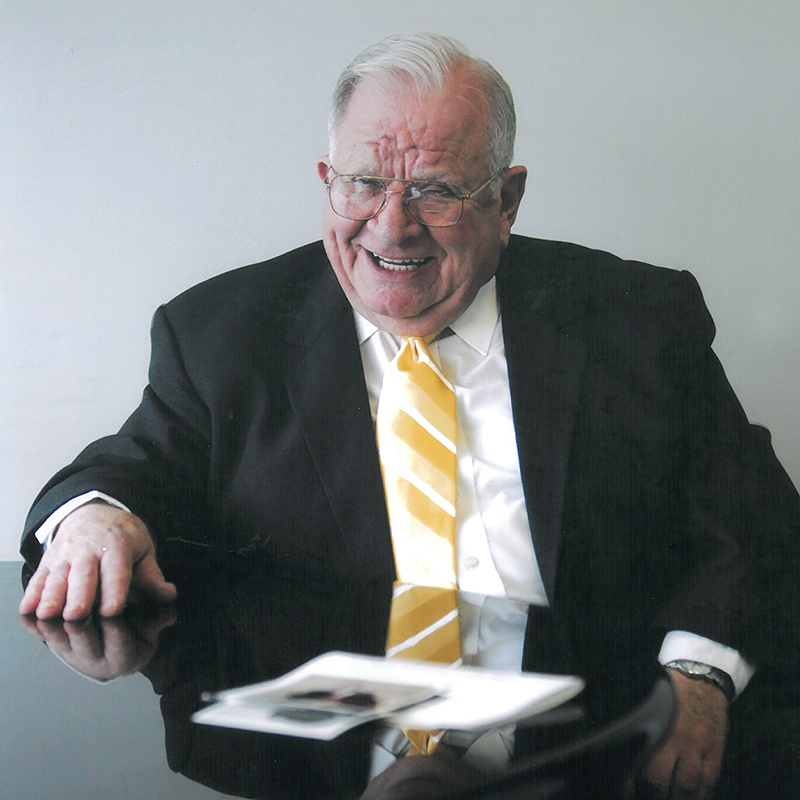 Wayne B. Smith is fondly remembered for many things: his humor, passion for preaching, love for fellow ministers, and hope-giving encouragement. He also is remembered for a willingness to state his position on hot-button issues. But don’t take our word for it.

Acts 4:12 says, “And there is salvation in no one else, for there is no other name under heaven given among men by which we must be saved.” Everyone knows that name: Jesus.

Almost everyone in the Christian church knows another name as well. It’s a name that evokes smiles and stories in the hearts of those who hear it: Wayne B. Smith.

For 40 years, from 1956 to 1996, Wayne served as senior minister with Southland Christian Church in Lexington, Kentucky—one of our flagship churches. He was often referred to as “the Bob Hope of the Christian Church” and lived up to that, bringing humor, hope, and encouragement to preachers and others all over the country.

Bob Russell, retired pastor of Southeast Christian Church, Louisville, Kentucky, called him “the most popular preacher in our movement.” Others have said he was more popular than the governor of Kentucky. While that would be hard to prove, there is no debate that Wayne B. Smith, who died last summer at age 87, was one of our most loved preachers.

Following are some gems in Wayne’s own words.

“There are 26 letters in the alphabet, arranged in 800,000 words. Books, magazines, articles, documents all started with 26 letters. There are 7 basic notes and the piano has 88 keys. Yet by using these 7 notes, a musician can arrange them in a variety of melodies, operas, and classical music.

“There are only 10 numbers, 0 to 9. Yet they are the backbone of mathematics. There are 3 basic colors: red, yellow, and blue—yet they blend into a variety of endless tints and shades.

“The point is, God never gives us much to work with.

“Talents are few, but Shakespeare only had 26 letters. Beethoven only had 7 notes. Rembrandt only had 3 colors. Einstein only had 10 numbers.

“How much do you have? Are you doing the best you can do with what you have to the glory of God? If so, you are a success whether you preach to 30 or 3,000. If not, you are a failure.”

“You read the whole thing,” Jack teased. “You didn’t read it very well, and it wasn’t worth reading.”

What a blessing that we have so many of Wayne’s messages today. By the way, they’re all worth reading.

He served as NACC president in 1977 when the convention was in Cincinnati. His theme? “The Word of God—Forever.” Here’s a portion of what he preached that year:

“Whatever happened to preaching? A group of men went to Chicago to consult with Billy Sunday, the famous ballplayer who became an evangelist. They went to the seventh floor of his hotel. They knocked on the door. He asked why they came. They said, ‘We want to know about your preaching. What gives power to your preaching?’ He said little before he walked over to the window, looked down seven floors, and called the men over to look. They looked down and saw the people walking to and fro on the sidewalk, and all that Billy Sunday said were these words: ‘They are going to Hell. They are going to Hell. They are going to Hell.’ My brethren, do you know that we’re going to be saved by the foolishness of preaching? ‘Woe unto me if I preach not the gospel.’

“Notice the place of preaching in the early church—its history began with a sermon; the New Testament church moved across the pagan Roman Empire on the wings of preaching. ‘Daily in the temple, and in every house, they ceased not to teach and preach Jesus Christ.’ The first martyr was a preacher (at the end of a three-hour board meeting).

“‘They that were scattered abroad went every where preaching the word’ (Acts 8:4). ‘Then Phillip went down to the city of Samaria, and preached Christ unto them’ (Acts 8:5). Gentiles were ushered into the kingdom through preaching. Paul cited an Old Testament passage: ‘How beautiful are the feet of them that’—do what, do what?—‘preach’!”

Wayne never avoided tough subjects or political hot potatoes in the pulpit. He handled them with his signature humor and gracious spirit. But he always took a stand for the Word of God. Some of those messages were reprinted in their entirety in the Lexington Herald-Leader, the city’s main newspaper. Not only did the Southland Church know where he stood on capital punishment, abortion, drinking, and other social issues, the whole city and beyond knew.

He was asked one time how he knew who to vote for. His answer? “I try to vote for the right person. However, I could never vote for a candidate or platform that includes homosexuality or abortion.” He was also asked, “If you were not a conservative, what would you be?” Wayne’s response? “Ashamed.”

Here’s a portion of his message on abortion from Sunday, January 18, 1987:

“Today is Sanctity of Life Sunday, which means ministers all over America are encouraged to preach against abortion. Fourteen years ago, January 22, 1973, the Supreme Court said an unborn child is not human—and can be killed! This is not my favorite sermon.

“Every 20 seconds a baby is killed. More unborn lives have been snuffed out than 10 times the total number of Americans lost in all our wars. America and the world were shocked into disbelief that Jim Jones and Jonestown could be a reality in the 20th century. Every seven hours we kill as many as the mass suicide in Jonestown.

“It’s a federal offense if you kill an eagle, but you can kill a baby. It’s illegal to ship pregnant lobsters to market—$1,000 fine and a year in jail—but you can kill a baby. The Massachusetts Supreme Court ruled that goldfish cannot be awarded for prizes because it violates the state’s anticruelty law. But the same state upheld mandatory funding for abortion. The same senators who voted to protect dogs from experimentation voted for abortion. Man’s best friend, the dog, came out better than man.”

From a Christmas message preached December 22, 2002, he shared his love for the Restoration Movement:

“There’s an old saying, ‘Big doors turn on little hinges.’ God often selects small places to do big things. A famous cartoon used to be printed in newspapers around the country on Abraham Lincoln’s birthday. It showed two Kentucky farmers talking over a rail fence. One asked, ‘Anything new?’ The other responds, ‘Nope, nothing new. Oh, they say Nancy Lincoln gave birth to a baby boy last night in her cabin, but nothing really important ever happens around here.’

“Who would have ever guessed that America’s most loved and respected president would be born in Hodgenville, Kentucky? Who would have guessed that anything significant would ever happen at Cane Ridge, Kentucky—a little crossroads a few miles outside of Paris, Kentucky? Cane Ridge was the site of a gigantic revival led by Barton W. Stone, a Presbyterian minister, in 1801.

“That revival, which lasted for weeks and welcomed as many as 30,000 people, was the impetus for a spiritual awakening that brought people together from various denominational backgrounds. They concluded it was time to abandon divisive denominational creeds, allow the Bible to be the only guide, and to be called Christians only.

“In time, the movement of Barton Stone at Cane Ridge joined with a similar movement of Thomas Campbell from Brush Run, Virginia, and the Christian church and churches of Christ became the fastest-growing religious movement on the frontier.

“Interestingly, on September 18, 2002, The New York Times listed the fastest-growing religious movements in America during the decade of the 1990s, and the independent Christian church was second with an 18 percent increase—less than one percent behind the Mormons. All that began in a little out-of-the-way spot called Cane Ridge, Kentucky. God still chooses the weak things of the world to shame the strong.”

The sermon Wayne is most famous for is “Playing Hurt,” a message he began preaching every Super Bowl Sunday back in 1983:

“The greatest thrill, the greatest dream, and the greatest goal of a football player’s career is to play in the Super Bowl. To be able to wear the ring of the Super Bowl champion is the greatest accomplishment of all. I’m told that running with a football in an NFL game and being tackled is somewhat like running into a brick wall! In spite of their unbelievable conditioning, nearly all of these players play hurt.

“The message is simple and it all boils down to this: Whether you’re on a football field or in the kitchen or in the office, you’re going to be hurt. All of us have hurt in our lives. We’ve either had problems, are having problems, or will have problems. The Bible tells us that suffering is inevitable.

“Salvation is free, but it’s not cheap. We’re not saved by works, but we’re saved for works, and God wants you in that game, and it’s only the love of God that will keep you in that game until you cross the finish line.

“He suffered, and the servant is no better than the Master.

“There it is. Suffering is inevitable; misery is optional!

“Suffering is inevitable; misery is optional! It will come to you one way or another, in some form, and you either play hurt or you don’t play at all.”

One of the last messages Wayne shared to preachers were these words:

“I love preachers and preachers need the fellowship of other preachers.

“If the task is once begun, never leave it ‘til it’s done.

Barry L. Cameron serves as pastor with Crossroads Christian Church in Grand Prairie, Texas. Wayne Smith was his hero, mentor, encourager, friend, and spiritual father for 54 years. When Cameron was just 9 years old, Smith told him, “You’re going to be a great preacher some day.”