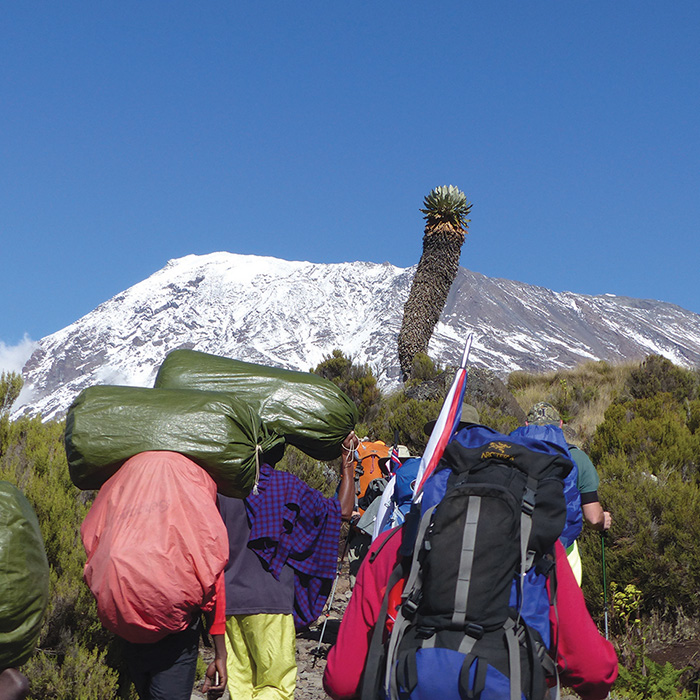 Here’s what I learned from our group climb to the summit of Mount Kilimanjaro, the roof of Africa.

January 4, 2017, is a day I will never forget. At 8:00 that morning, I stood on the summit of Mount Kilimanjaro. Looming 19,341 feet above sea level, Kilimanjaro is called “the roof of Africa.” The views are breathtaking. Reaching the summit was an over-the-top, bucket-list experience, made even sweeter because I was part of a trekking team that raised more than $140,000 to build classrooms for impoverished children in Kenya.

The vision to climb Kilimanjaro exploded into my life in early 2016. I received an e-mail from Christian Missionary Fellowship (CMF) announcing formation of a climbing team to raise money to build classrooms in Turkana in northern Kenya. Before my next breath, I knew God was calling me to take part.

My wife asked me if I had prayed about it. Smiling, I said this was exactly the kind of challenge for which God had wired me. I knew in a heartbeat this was an invitation I could not pass up!

Twenty-seven people from around the globe comprised our trekking group. Each person covered his or her own expenses and was also challenged to raise $5,000 to build the new classrooms. Our goal was to raise a total $150,000 to build classrooms for 240 children. The school in Turkana already had 1,000 students, but another 1,000 children were on the waiting list!

We arrived in Nairobi, Kenya, where our team assembled for the first time. We had been in e-mail communication for months. Each of us had been training, but this was the first time we met personally. Most of us were nervous about what lay ahead. We had been told repeatedly that climbing Kilimanjaro would be “the hardest thing you have ever done.” The message sank in. We did not know exactly what was ahead—but we knew the experience would test us to the core.

While in Nairobi, we visited Missions of Hope International (MOHI), CMF’s ministry partner in Kenya. MOHI operates the school in Turkana for which we were raising funds. MOHI, led by Wallace and Mary Kamau, is a remarkable ministry that now has 15,000 children in its schools. Each child receives excellent education, two meals a day, medical attention, and the gospel of Jesus Christ. Our trekking team was totally blown away by MOHI’s amazing staff and the phenomenal way they are transforming lives with God’s love and grace!

After an eight-hour bus ride to Tanzania, we met our trekking guides. These men were experienced—one had been to the summit more than 800 times! They assured us that climbing Kilimanjaro would be “a piece of cake!” (That statement proved to be a significant exaggeration!) But it was clear our guides would do everything possible to get us to the summit. They not only kept us on the trail, they were also cheerleaders and an extra pair of helping arms when we needed them.

The entrance to Kilimanjaro National Park is 6,100 feet above sea level. The first day, we hiked 5 miles and climbed 2,760 feet in elevation. This portion of the trip meandered through rain forest with a lush canopy above us; exotic flowers dotted the trail, and monkeys frolicked nearby. We really felt like we were in Africa!

It rained off and on throughout the day until we arrived at Mandara Huts for the evening. These “hiker huts” are rustic shelters provided by the park for trekkers.

A guide was always in front, setting the pace. But the pace was noticeably slow. The lead guide hiked much slower than I was used to. At first it bothered me. I wanted to go faster! But the guides kept repeating a phrase in Swahili: polé-polé (pronounced like olé at a bullfight). It means “slowly-slowly.” Eventually I realized the guides knew best. They purposely set a slow pace to conserve our energy for the final ascent and to allow us time to acclimate to the increasing elevation.

Looking back, I think life might be better if all of us lived each day polé-polé . . . slowly-slowly. It’s often been said that life (and ministry) is a marathon, not a sprint. Why are we so often in a rush? A little polé-polé might help all of us!

The second day we hiked 7.2 miles in drizzling rain and climbed an additional 3,280 feet to Horombo Huts. We were now at 12,140 feet above sea level. We stayed two nights to acclimate.

By now the rain forest was far below us, and we were in terrain covered with scrub and rocks. At this point the sky finally cleared, and we got our first glimpse of Kilimanjaro . . . it was both breathtaking and daunting!

Things turned serious on the fourth day. We left Horombo early and hiked 5.7 miles, climbing another 3,280 feet, to Kibo Huts. We were now at 15,420 feet, and it looked like moonscape; there was no vegetation in sight.

We had a light dinner and then received our final instructions before “the ascent.” It reminded me of a war briefing before heading into combat. We rested until 10:00 p.m., and by 11:00 p.m. we began the long-awaited march to the summit. This was the moment we had all trained for!

From Kibo Huts to the summit is 3.5 miles, with 3,920 feet of ascent. The first seven hours of climbing zigzags virtually straight up through volcanic cinder dust. We slogged uphill all night in single file with our headlamps creating the illusion of a snake slithering up the mountain. Every so often our guides would break out in joyous Swahili songs to buoy our spirits. Their melodies and enthusiasm were invigorating!

We reached the crest of the volcanic crater atop Kilimanjaro at 6:00 a.m., just as the sun was rising. The crest is known as Gilman’s Point, 18,700 feet above sea level. From there, the trail followed the lip of the volcanic crater for two more hours, often through ice and snow, before we finally reached Uhuru Peak (Freedom Peak) . . . the summit of Mount Kilimanjaro, 19,341 feet above sea level.

The sky was crystal blue, and it felt like we could see a million miles! But it was bitterly cold with the wind howling at gale force. None of us wanted to stay long . . . so after taking photos, we headed back down. Twenty trekkers from our group made it to the summit. I thought that two women, Luci and Rosiland, showed the most grit. They were the last two to make it to the top. And they both had “I will not quit” tattooed all over their faces!

The best parts of the experience, from my perspective, were mealtime conversations and the heartwarming discussions along the trail. This surprised me! I’m normally a fairly private person. But as we climbed higher and as the challenge of the final ascent loomed closer, a remarkable sense of transparency took place within our hiking team. A special bond began to grow. Most of us had just met, but after a few days on Kilimanjaro, we had become family. Even now, when I think about it, my eyes can tear up. I grew to genuinely love the trekkers I had shared life with!

I’ve been asked many times if I would do it again. Yes, it was hard . . . really hard. But the rewards far outstripped the pain! And I would do it again in a heartbeat! In fact, CMF is organizing another trek to Kilimanjaro in July 2018. To learn more contact Kent Fillinger at KentFillinger@cmfi.org. You can also contact Kent to contribute to the classrooms for the children in Turkana.