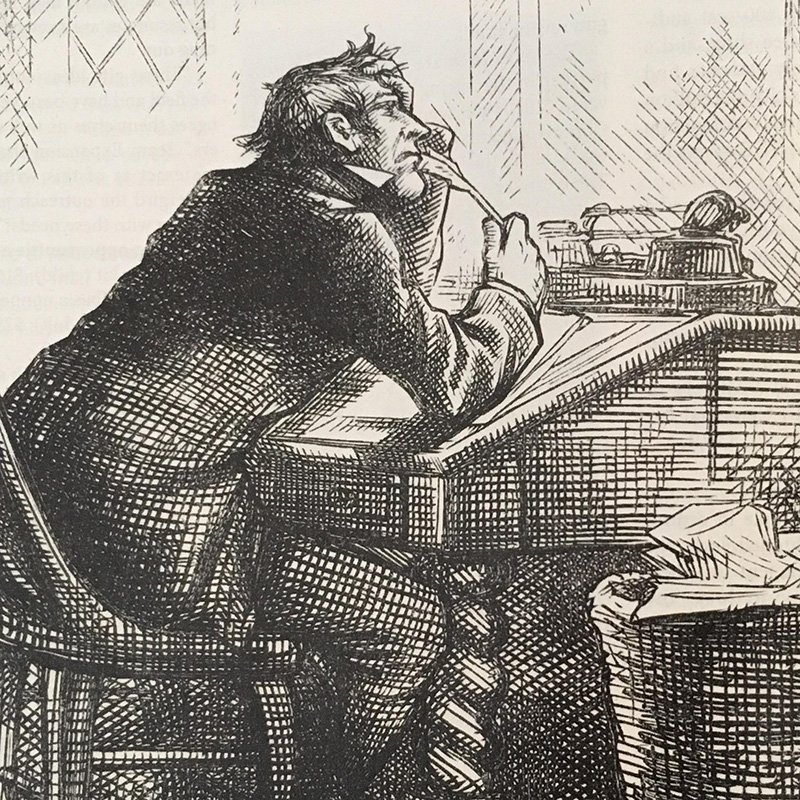 This essay originally appeared in the December 2012 issue of Christian Standard.

It was the worst of times for children.

Charles Dickens, a handsome man of 31, trudged up the steps of Number One Downing Terrace, a tall brick house surrounded by flower beds.

He was returning from his morning walk. Often he walked 10 to 20 miles a day around London. One day he would walk through the rich neighborhoods. The next day he would pass through the rookeries, or slums, where as many as 30 children lived in one room, with no bathing facilities. The contrast between the rich and the poor was overwhelming.

Before he reached for the door latch, he turned around and looked out over the city. It was snowing, even though it was only the first of October. He held out his hand to catch the snow, and then realized the gray snow was only ashes from a thousand smokestacks whose emissions carpeted everything in London with soot. At times it seemed like the whole town was on fire, and the smell was like burning sulfur.

The Industrial Revolution was underway in 1843 Victorian England. Eventually it would raise the lifestyles of everyone, but for now, it made a few people rich, and everyone else poor.

Charles stepped inside the house, and slapped his hat on his right thigh, to shake off the soot.

His wife, Catherine, appeared in the kitchen doorway.

“Charles, you are back! I was worried about you, you have been gone so long.” She was a pretty woman, with ringlets of chestnut hair that dangled alongside her cheeks, twinkling black eyes, and small, perfect lips. She was visibly pregnant with their fifth child. She would have five more children before they were done.

Exhausted, Charles dropped down on the sofa, and kicked off his shoes. He took a deep breath and let it out, as if he were letting out a lifetime of weariness.

“It breaks my heart, Catherine,” he began, hanging his head. “The way children are treated in this town. It’s shameful.”

Catherine studied him closely. Normally he was such a cheerful, energetic man, but today he looked tired and distressed.

“I see children just 6 years old working barefoot in the cotton mills, the nail factories, the glass works, the paper mills. . . . They work from eight in the morning till eight at night.”

Catherine shook her head slowly back and forth.

“And because children are small, their bosses make them crawl inside the machinery to clean the cotton out of the machines. Some of them never make it out alive.”

“That’s terrible!” Catherine exclaimed. “I can’t believe anyone would do that to a child.”

Charles went on. “Children lose their hearing from working around noisy machines . . . and the kids who work in the match factories lose their teeth from breathing the phosphorous fumes.”

“I know,” Catherine replied. “I hear things, too. My sister told me about the chimney sweeps who climb up into chimneys, like human brushes. Some of them fall to their death or suffocate on the fumes.”

Charles stood up and stared out the window at the smokestacks in the distance. “Somebody needs to do something for children, but what?”

“You’ve done more than most for the cause of children, Charles. Your book Oliver Twist showed the world what is going on with children in London.”

Charles turned and stared at her. “Maybe, but it didn’t change anything, not really.” He gripped the back of a chair with angry hands. “I want to write a book that will actually change the hearts of the rich and indifferent, not just make them feel guilty. I want them to WANT to be compassionate, of their own free will. I want them to enjoy giving, to be cheerful about it.”

“Well,” Catherine said, “that’s a tall order, but if anybody could write that book, it would be you. Now, if you’ll excuse me, I need to go put breakfast on.”

Charles didn’t come to breakfast, and when Catherine saw that the door to his study was shut, she knew he wouldn’t come to lunch, either, and maybe not to dinner. He was working on a new book—she could sense it.

For six weeks Charles worked on his book, off and on, as he had time. Sometimes Catherine and the children could hear him laughing in his study, as he wrote. At other times there was only the creaking of the floor, as he paced back and forth, talking to himself, fleshing out his characters.

Sitting at his big, wooden desk, Charles said to himself, “I think I will make this a ghost story. Seems like everyone in England is interested in ghosts, maybe I can catch their ear that way.”

He wanted this book to sell, so he decided to make it shorter, so that more people would be likely to read it. Some of his other books had been as thick as a brick. And he wanted to include in this book some of the English Christmas traditions that had fallen out of practice, like Christmas dinner, with plum pudding and punch, or the roasting of chestnuts, and the singing of carols. England had become too serious.

Meanwhile, Catherine and the children went about their business, giving their father lots of space, so he could work.

Then one day in November, the study door opened, and Charles shuffled out, a sheaf of papers in his hand. He dropped down on the sofa, and promptly fell asleep.

When he woke up, two hours later, the family was sitting there, waiting for him to stir.

“Well,” Catherine spoke up, “Let’s see what you wrote! I can’t wait to hear it.”

Charles held out the manuscript. If was just 66 pages, handwritten. In print it would turn out to be little more than a booklet.

“I want this to be a beautiful book,” he said. “With red covers and gold edges.”

Catherine’s face fell. “But that will be so expensive, Charles, can we afford it?”

“Yes, it will be costly, and I want to price the book low, say five shillings, so anyone can afford it.”

Normally at this time of year, Charles would read to them from his book The Life of Our Lord, a somewhat whimsical version of the life of Christ, which he wrote just for his children, but for now, this new story begged to be heard.

Charles stood up, so he could speak better. The children sat on the floor and leaned forward, expectantly.

“A Christmas Carol, by Charles Dickens,” he began.

He read with inspired energy, stopping only to answer their questions.

“What kind of bug is a humbug?”

“There is no such bug as a humbug, that’s the point.”

“Shhh,” Catherine jumped in, “Let your father finish his story.”

At the mention of Tiny Tim, everyone turned and smiled at 2-year-old Walter, who grinned, shyly.

When Charles came to the part about ghosts, the children huddled together tightly, except for Kate, who jumped up on her mother’s lap and buried her face in her mother’s bosom.

At last the end was near. When Scrooge shouted to Bob Cratchit, “A merry Christmas, Bob!” everyone cheered and clapped.

When it was over, everyone spoke at once.

“I liked the way Scrooge stopped being so mean,” said Charley, the oldest child. “I didn’t know anyone could be that mean.”

Kate chimed in. “I’m just glad he got out of his dark house and went out on the town. He was such a stuffy, selfish man.”

“That’s what a miser is,” her father noted.

Catherine had tears in her eyes, and Charles wasn’t sure what they meant. He waited for her to speak.

She wiped her eyes with a hanky. “Oh, Charles, I am so glad you gave it a happy ending. I was so afraid Scrooge would never change. He had been so unhappy for so long, that I didn’t think he would ever smile again, but he did! He became the merriest one of all!” She wiped her eyes again. “It reminded me so much of you, Charles, the way you are always singing and laughing.

Charles blushed. He turned and looked out the window, and the light made his face glow with a look of peace. In his heart he knew he had done something important for the children of the world.

For Charles Dickens, it was the best of times.

Within six weeks, the first edition of A Christmas Carol was sold out. In Dickens’s lifetime it went through 24 editions. The book has never been out of print.

A Christmas Carol has been made into more than 28 films, plus several television animations. It was fashioned into ballets, plays, operas, and musicals. It has been quoted in speeches and pulpits around the world.

When the book was released in London, it did indeed inspire change. Factory workers began to give workers time off. Working conditions and wages improved. Eventually, Dickens’s works helped bring about child labor laws that prevented the abuse of children.

Some scholars think this was the most influential book Dickens ever wrote, even though it was just five chapters long. Many have tried to analyze why this book has been so powerful.

One good suggestion is that it was a book of hope, a book about second chances, something we have all dreamed of. It shows us that no matter how rotten we have been—or for however long—we can still change.

It’s the same message of redemption Jesus himself introduced, when he promised we could be “born again,” even when we are old, with a little help from a ghost. The Holy Ghost, that is.

Victorianweb.org—Provides extensive information about life in the Victorian Age.

“The Faith Behind the Famous” at ChristianityTodayLibrary.com. Describes the Christian faith of Charles Dickens.

CharlesDickenspage.com—offers a lengthy treatment of Dickens’s life and works.