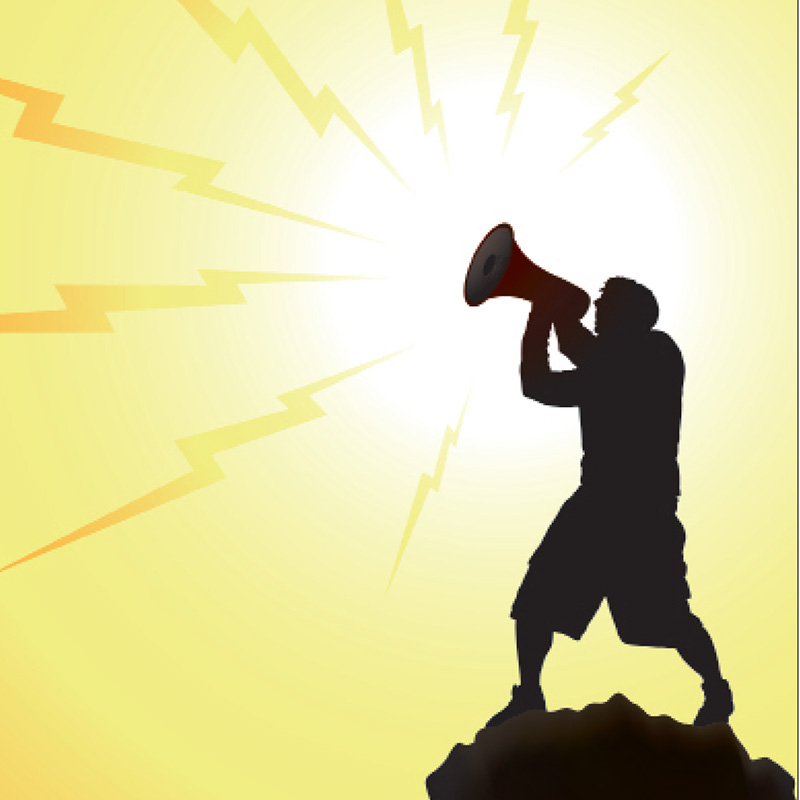 Can you keep a secret?

“Our son became an astronaut today.”

On September 17, 1962—in one of the most interesting segments of game show history—Stephen and Louise Armstrong appeared on I’ve Got a Secret with the secret that their son Neil had just been selected to be an astronaut. Neil was one of nine new men so chosen.

What made this appearance especially unique was that host Garry Moore asked Louise an incredible question: “Now, how would you feel, Mrs. Armstrong, if it turned out—of course nobody knows—but if it turns out that your son is the first man to land on the moon? What, how do, how would you feel?”

Neil’s mom’s reply was priceless: “Well, guess I’d just say God bless him and I wish him the best of all good luck.” A little less than seven years later, on July 20, 1969, Neil Armstrong became the first man to walk on the moon.

The Armstrongs’ secret was so good they couldn’t keep it—and understandably so. It was the kind of secret that had to be told.

Not all secrets are the same.

Some secrets are so good, and have the power to do so much good, that they must be shared.

Like the secret God told Mary Magdalene, Mary the mother of James, and Salome on the Sunday morning after Christ’s crucifixion when—through an angel of the Lord—God revealed, “He is not here; he has risen, just as he said” (Matthew 28:6; see Mark 16:1). This was a good secret, too good to be left untold. The angel of the Lord told these women to share it immediately, saying, “Go quickly and tell his disciples” (Matthew 28:7).

In the details of this event, there are three secrets that we must reveal as we go and tell people the good news.

FEARS CAN BE OVERCOME

I find cemeteries to be scary places at night and not much more pleasant during the day. I believe in God, Heaven, “the sweet by and by,” the streets of gold, and all other unimaginable beauty of eternal life after death. I believe that when the roll is called up yonder I’ll definitely be there, but I’m still not eager to die.

Every time I go to a cemetery, I come face-to-face with my own mortality—which can be a little frightening.

As these women approached Christ’s tomb, they had to be feeling a little fear and uncertainty. They were coming face-to-face with Christ’s mortality. They knew why they were there: Jesus had been in the tomb since Friday night, and his body would have been starting to smell; so they had come to anoint Christ’s body with spices.

Jesus had been their teacher, their healer, their friend, and their Messiah; but now he was dead. They had seen him raise others from the dead—so as these women approached the tomb, they had to be wondering why Jesus hadn’t done more to save himself.

Upon arriving at the tomb, these women found themselves in a very interesting—and unexpected—situation. While they were outside the tomb, a violent earthquake started when an angel of the Lord came down to roll back the stone that was covering the mouth of the cave. According to Matthew’s account, the angel’s appearance was like lightning and his clothes were as white as snow.

The scene was so overwhelming that even the experienced soldiers who had been guarding the tomb were so afraid that “they shook and became like dead men” (Matthew 28:4).

Not wanting the women to be paralyzed by fear, the angel said to the women, “Do not be afraid” (v. 5).

“Do not be afraid.” What do those words mean to you?

Every person is afraid at one time or another. God knows us, and he knows that we have fear, so—throughout the Bible—when God needed someone to answer his call, the first words out of his mouth so often were, “Do not be afraid.”

When Abram started to doubt that he would ever have a son, God said, “Do not be afraid” (Genesis 15:1).

When Moses and the Israelites found themselves facing King Og of Bashan and his army, God said, “Do not be afraid” (Numbers 21:34).

When Joshua was preparing to battle the city of Ai (after previously being defeated by them), God said, “Do not be afraid” (Joshua 8:1).

When the Israelites were facing the king of Babylon and his army, God said, “Do not be afraid” (Jeremiah 42:11).

When Mary was told she was going to be the mother of the Messiah, the angel of the Lord said, “Do not be afraid” (Luke 1:30).

When Joseph found out that his virgin wife was going to have a baby, God said (through an angel), “Do not be afraid” (Matthew 1:20).

When Jesus was trying to prepare his disciples for the last day of his life, he said, “Do not be afraid” (John 14:27).

When Paul was being persecuted for preaching the gospel, God—wanting him to keep going and telling—said, “Do not be afraid” (Acts 18:9).

It’s not a sin to be afraid; it’s human. But it is a sin to allow fear to paralyze us and keep us from sharing the good news that Jesus is alive.

Jesus wanted these women to be bold as they shared their secret; so when he appeared to them as they left the tomb, he also said, “Do not be afraid” (Matthew 28:10).

Their secret was too important to be entombed by fear.

Our secret is too important too. We can’t let fear win. As we tell the good news, it’s OK to share the secret that we had to face our fears to do so, because that reveals we are faithful, not fearful.

DOUBTS CAN BE DEALT WITH

The angel knew this secret about Jesus was unbelievable, so he told the women, “Come and see the place where he lay” (Matthew 28:6). He knew that if they saw with their own eyes that Jesus’ body was gone, they’d be more apt to believe.

Doubt is not a sin. Like fear, it’s just a part of being human. Our perspective is finite. We can’t know everything, so there will be some things that never make sense. But like fear, our doubts—if left unchecked—can lead us to sin by hindering our faith.

Some of the most faithful people in the Bible had to deal with doubt.

Moses doubted his ability to communicate God’s plan to Pharaoh and the Egyptians, so he asked God, “What if they do not believe me or listen to me and say, ‘The Lord did not appear to you’?” (Exodus 4:1). But he didn’t let those doubts stop him from telling Pharaoh to let the Israelites go.

Gideon doubted God’s ability to defeat the Midianites: “‘But Lord,’ Gideon asked, ‘how can I save Israel?’” (Judges 6:15). But he didn’t let those doubts stop him from leading 300 men to a decisive victory.

Peter doubted his own ability to keep walking on the water and cried out, “Lord, save me!” (Matthew 14:30). But he didn’t let those doubts stop him from being the first person to step out with the gospel on the Day of Pentecost.

Thomas doubted when he heard of Christ’s resurrection from the dead. He said, “Unless I see the nail marks in his hands and put my finger where the nails were, and put my hands into his side, I will not believe it” (John 20:25). But he didn’t let those doubts stop him from touching his Savior and touching this world.

All believers will, at one time or another, have doubts. So with Jude I say, “Be merciful to those who doubt” (Jude 1:22). But all believers also have a responsibility to share God’s good secrets with the world, so with Jesus I also say, “Stop doubting and believe” (John 20:27).

GOOD SECRETS ARE MEANT TO BE SHARED

I’m so glad he didn’t take his secret to the grave, because his secret has blessed my life, satisfied a hunger deep in my soul for something more, and helped me to grow in numerous ways.

Of course I’m talking about . . . Colonel Sanders—and his fried chicken with its secret blend of 11 herbs and spices. Colonel Sanders knew that his secret recipe was the key to the success of his company, so he went to great lengths to protect it. As a result, only a handful of people know the multimillion-dollar recipe. In addition, production is compartmentalized so that one company produces part of the spice blend and another company handles the other, with neither company having the complete recipe.

The Colonel once said, “It boggles the mind just to think of all the procedures and precautions the company takes to protect my recipe, especially when I think how Claudia and I used to operate. She was my packing girl, my warehouse supervisor, my delivery person—you name it. Our garage was the warehouse.” (See www.kfc.com.)

But imagine if the Colonel had taken his secret to his grave. I am so grateful he shared his secret with his team before it was too late!

God didn’t want these women at the tomb to wait one more moment before telling their good news. Through the angel the Lord said, “Go quickly and tell his disciples: ‘He has risen from the dead and is going ahead of you into Galilee. There you will see him’” (Matthew 28:7). The women didn’t need to hear anything else and immediately hurried from the tomb with this good news.

I’m so glad they didn’t procrastinate. But why would they? They had just heard the best news of all time! With the revelation of this secret, their prayers had been answered, their grief had been executed, their pain healed, their hearts mended, and their hope restored. Good secrets like that can’t be untold.

Why do we procrastinate when it comes to sharing the good news that Jesus has risen from the dead? It’s inexcusable. Too many Christians are taking this amazing secret to their graves when, if only they would tell it, the lives of countless people could be changed forever.

I’m so glad these women didn’t take this secret to their graves, because this secret has blessed my life, satisfied a hunger deep in my soul for something more, and helped me to grow in numerous ways.

Why do we procrastinate when it comes to sharing the good news that Jesus has risen from the dead? That’s the thing about good secrets that aren’t meant to be kept—they mean nothing unless they are shared. Some secrets have the power to give life, not take it. These secrets must not be kept; they must be shared.

Like this one: Jesus is alive! He’s not here; he has risen.

Can you keep this secret?

Arron Chambers is senior minister with Journey Christian Church in Greeley, Colorado. This article was excerpted from Go! From Studio Audience to Center Stage, a book published that year by Standard Publishing.