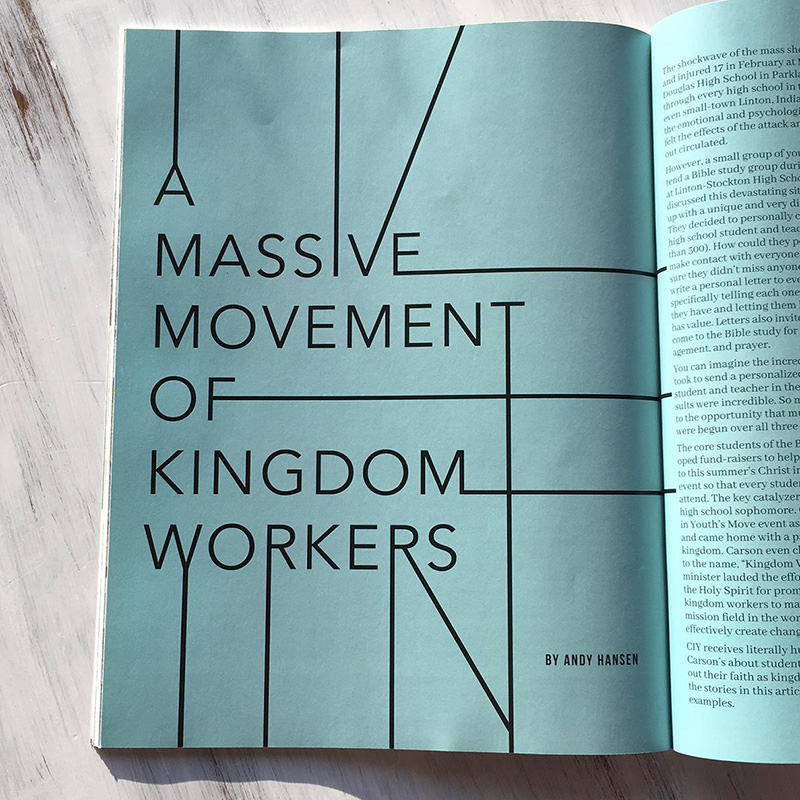 The shockwave of the mass shooting that killed 14 and injured 17 in February at Marjory Stoneman Douglas High School in Parkland, Florida, rippled through every high school in the United States. Not even small-town Linton, Indiana, was spared from the emotional and psychological trauma. Students felt the effects of the attack and rumors of a walkout circulated.

However, a small group of young people who attend a Bible study group during the lunch period at Linton-Stockton High School prayed over and discussed this devastating situation . . . and came up with a unique and very different action plan. They decided to personally connect with every high school student and teacher (numbering more than 500).

How could they personally circulate and make contact with everyone? How could they make sure they didn’t miss anyone? The solution was to write a personal letter to every student and teacher, specifically telling each one the unique qualities they have and letting them know that every person has value. Letters also invited each recipient to come to the Bible study for conversations, encouragement, and prayer.

You can imagine the incredible effort and time it took to send a personalized, specific note to every student and teacher in the high school, but the results were incredible. So many students responded to the opportunity that multiple prayer groups were begun over all three lunch periods.

The core students of the Bible study also developed fund-raisers to help pay for new registrations to this summer’s Christ in Youth high school Move event so that every student who wanted to could attend.

The key catalyzer for this movement is a high school sophomore. Carson attended Christ in Youth’s Move event as a freshman last summer and came home with a passion to do more for the kingdom. Carson even changed his Instagram post to the name, “Kingdom Worker.”

Carson’s youth minister lauded the efforts: “A huge shout-out to the Holy Spirit for prompting these students as kingdom workers to make an impact in the biggest mission field in the world—their school. I cannot effectively create change in school . . . but they are!”

CIY receives literally hundreds of stories like Carson’s about students who are actively living out their faith as kingdom workers. I can’t tell all the stories in this article, but here are a handful of examples.

At last summer’s CIY Move event, Kiara received a Kingdom Worker card. These cards present significant challenges that call students to take big action steps and drive them to depend upon God. Kiara’s card challenged her to raise $2,500 and bring 10 students who don’t know Jesus to Move in the summer of 2018. How is a 16-year-old with no job going to accomplish that? Kiara more than met the financial challenge with the support of her family, friends, and church . . . and several garage sales!

Kiara prayed about who to bring to Move. She recalled her mission trip to a Native American reservation the year before and visualized the desperate needs of the teens in that setting. After a few phone calls with missionaries on the reservation, 10 sharp and spiritually open students were planning to travel from Arizona to California for a CIY Move experience this summer! Imagine what will happen that week. Please pray that these students will have responsive hearts.

It was a joy to walk into the youth room at Crossroads Christian Church in Anthem, Arizona, and chat with several students. During that discussion I asked if any of them had gone to a CIY high school Move week in the summer. Their faces lit up. They shared how Move had been a spiritually motivating experience, a highlight of their year, and how much they were looking forward to going again this summer. Two of the young men introduced me to a couple of new students who were planning to go to their first CIY Move event this summer.

I caught up with their youth minister, Josh Wyatt, who was enthusiastic about the church, the youth ministry, and their significant partnership with Christ in Youth. Josh hadn’t planned to go into the ministry, though he always had a heart for students and sharing Christ with them.

Wyatt said he was volunteering in a new church plant when, at the last minute, he decided to take a group of students to a CIY Move. While serving as a sponsor at the event, he clearly received a call to give Jesus all his gifts and decided to go into youth ministry so he could spend a majority of his time proclaiming the truth of God’s Word to students.

At CIY’s SuperStart preteen event, literally thousands of fourth- through sixth-graders receive the call to kingdom work in a way that they can practically apply to their lives. This year, CIY’s stage team shared with the students a simple method of how they can explain the gospel story using three different colors of Legos with the words Jesus, God, and Us written on the sides.

As the students tell the gospel story, they connect, disconnect, and reconnect the Legos in a different order. The students practiced this with their leaders in small groups until they were comfortable telling the story without an instruction card. (Instruction cards may be purchased via CIY’s website.)

A group of preteens from Keithville, Louisiana, attended the CIY SuperStart in Dallas. These young people were enthusiastic about this simple gospel presentation. They went home, practiced some more, and then shared the gospel story at their church on family night in front of parents and other preteens. These kingdom workers then challenged these preteens to share the gospel with their friends. The response was so enthusiastic the students set their sights on an even bigger stage.

A plan was hatched to share the gospel story (using Legos) with more than 300 students who attend an elementary Fellowship of Christian Athletes gathering at the local school. Preparations were made.

At the next FCA meeting, several students used Legos to present the gospel message, and then passed out packets of “gospel” Legos to all 300 in attendance. Everyone practiced as a group, and then the preteens were told to turn toward each other and share the message. A wave of excitement and enthusiasm erupted as the youngsters gained confidence through repetition. The whole group then prayed for the courage and ability to share this presentation with family and friends.

Delaney had never run track or competed in any major race. Yet after attending a CIY Move week where she watched the CIY feature film Love Costs Everything (the present-day story of persecution of the church and Christians in six different parts of the world), Delaney committed to helping raise $2,000 to send out national missionaries in India to plant a church in an area where Christians have been persecuted.

“I had never run a 5K and I knew nothing about it. But I went and talked to my D-group and they loved the idea. We organized the ‘Ignite India’ 5K run with the hope of igniting the love of Christ and revival in India.”

The first Ignite India race was so successful Delaney reached the fund-raising goal and was able to go to India with a CIY Engage trip that next summer.

Kingdom Workers: Responding to the Call

These young people, and many more not mentioned here, are not just the leaders of tomorrow—they are the vibrant, Spirit-led kingdom movement of today!

(For more stories of students whose lives are being transformed into kingdom workers, go to kw-hub.com/stories; to learn more about CIY events and trips, visit www.ciy.com.)

Last summer more than 3,000 students made decisions to accept Christ at a CIY Move or Mix event, approximately 2,500 decided to enter vocational ministry, and nearly 22,000 stood to say they would accept the call to be kingdom workers.

Whether it is at CIY’s preteen SuperStart weekend event, a junior high Believe weekend event, a full-week Move event for high schoolers, a Mix summer event for junior high students, an Engage mission experience, a digital YouTube message viewed on a cell phone, or the visualization of a CIY AEffect film . . . young people consistently hear the challenge to respond to the call to become kingdom workers . . . to give the best of their gifts and abilities to God and to be willing to be mobile . . . to move to wherever God is calling them to serve.

Worship, the Word, and community are very important at these events—especially specific programmed opportunities for small group leaders from the church to interact with their students. Ongoing mentoring relationships are a must to move forward in spiritual depth and cement “flag in the sand” decisions that are made in such an environment. Therefore, CIY provides leaders with age-intentional, interactive small-group activities, and also videos and interactive games that students can view on their phones. Key Scripture passages are explored and applied to the young person’s current life experiences.

Christ in Youth is reaching more than 80,000 youth and youth workers a year! And with an aggressive expansion of several CIY programs in the United States and the projected launch of Move in Ireland in 2019 (with a launch soon to follow in Canada), CIY anticipates it will partner with the local church to minister to more than 100,000 young people a year by 2020.

This means in the coming decade, at least 1 million students will receive and respond to the call of becoming kingdom workers! The goal is eventually to have weekly, if not daily, digital interactions with CIY kingdom workers via their cell phones: messages from youth workers and influential leaders, Bible studies, Scripture memorization, inspirational stories of kingdom work, and more. The goal is for this viral and active movement to ripple out well beyond the ministry of Christ in Youth.

Andy Hansen is president of Christ in Youth. He has served with CIY since 1985.