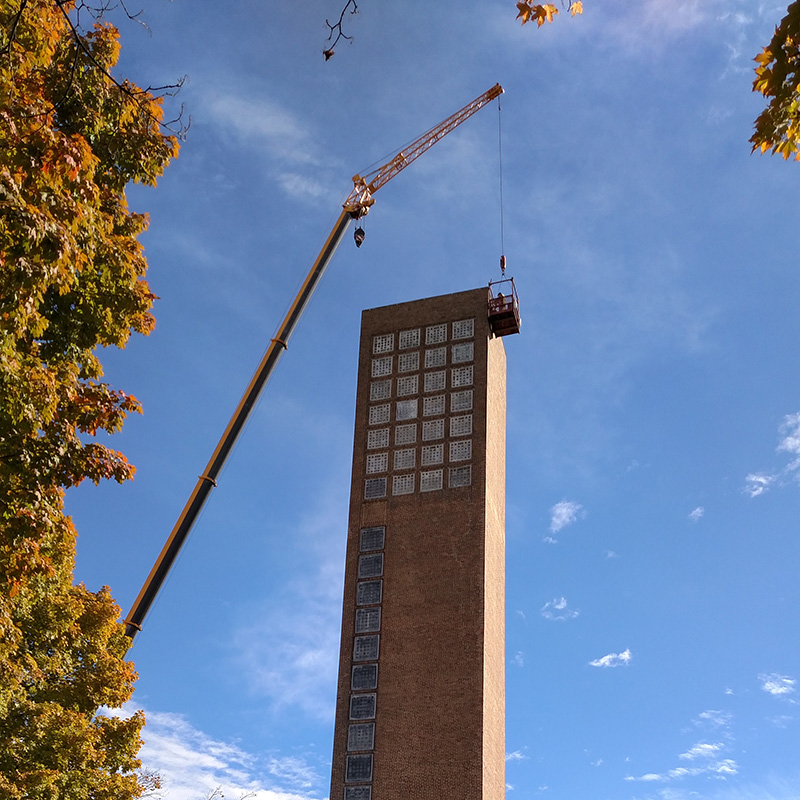 “You don’t see many pictures of Columbus that you don’t see First Christian Church’s tower,” says Steve Yeaton, senior minister of the church.

The church’s building is possibly the most architecturally significant among Christian churches and churches of Christ.

The 1942 structure is the product of Finnish architect Eliel Saarinen (assisted by his son, Eero, who later designed the Gateway Arch in St. Louis). It is the first contemporary church in Columbus, and it is one of the first churches in the nation built in the Modern architectural style.

The church also was the first in a wave of dozens of architecturally significant buildings in the small Midwestern city. A poll by the American Institute of Architects ranked Columbus No. 6 in the nation for architectural design (right behind Washington, D.C.).

There are architectural tours of the city—and the church—every day. And First Christian Church—located across from the Columbus Visitors Center—is often the first stop.

At the same time, the 76-year-old structure poses distinct challenges.

Just three weeks ago, a crane hoisted a basket containing structural engineers who examined and assessed the water leaks in the tower caused by significant cracks in the mortar joints. Those were sealed, and some screws were drilled into the outer brick, but it was merely a short-term fix.

The price tag for repairs is not yet determined, but it’s expected to be steep, says elder Steve Wiggins, who has attended FCC since 1969 and serves on the Friends of First Christian Church Architecture, a nonprofit to which people can donate (but which is separate from the faith and worship aspects of the church).

In 2014-15 the church hired an architectural engineering firm that performed a comprehensive review of the building and created a 110-page book detailing necessary repairs and other concerns. From that, the church developed a list of priorities. At the top of the list was the sanctuary skylight, which had serious water damage and was leaking.

Who pays for these types of things?

The Friends of First Christian Church paid $142,000 toward the skylight project, and the remainder came from other community sources via the Heritage Fund–the Community Foundation of Bartholemew County.

Cost-sharing related to subsequent repairs will likely vary with each project, says Yeaton, who spent much of his youth in Columbus.

The church and city want to maintain the historical integrity of the building, but it comes at a cost the church cannot bear alone, Wiggins says. For one thing, many of the needed repairs have no direct bearing on the quality of worship at the church.

“We’ve drawn a little bit of a line to say these design elements are important to the church but aren’t part of their religious mission,” Richard McCoy, founder of Landmark Columbus (a program of the Heritage Fund), told www.Curbed.com in 2017.

The skylight, Wiggins says, could have been roofed over for $30,000.

[Click here to see several photos from that project, courtesy of Steve Yeaton.]

“The skylight is a big part of the architectural design of our worship center,” Yeaton says. “[But] we don’t need a skylight to do what we do.” The community partnered with the church to help pay for skylight repairs. But, Yeaton stressed, the church didn’t force others to share the cost.

It’s the same situation with the tower. The tower is a striking feature of the church and the city, but it isn’t necessary for ministry, Wiggins says. It’s needed repairs almost certainly will be more than can be absorbed by the church, which averages 550 to 600 weekly.

“We have a major problem with the tower, especially the top of the tower,” says Wiggins. “They [the engineers] are going to give us a report in about two months about what it will take [to fix it] long term.”

Wiggins says outside sources will definitely need to step forward with that project. “We’re not going to put millions [of dollars] into that tower.”

First Christian’s next three priorities for repair, in order, are the church’s limestone steps, the “bridge” area (connecting the east and west portions of the building), and the windows. Wiggins calls FCC’s situation—a church housed in an architecturally significant, but aging, National Historic Landmark—both “a blessing and a curse.”

The Building’s Influence on Ministry

Yeaton doesn’t want First Christian’s identity to be defined by its facility, but he allows that the church’s architecture “influences how we do ministry.” He emphasizes that the blessing of having a church building of such notoriety outweigh possible disadvantages . . . which some would say include immovable pews and acoustical challenges.

“Our worship area is ‘cathedralesque’—the space reminds you of your smallness before the Almighty. . . . We don’t look at the facility and say we can’t do this and we can’t do that,” Yeaton says, even though he allows that today’s utilitarian churches offer more versatility.

Most of our churches got rid of their organ some time ago, but First Christian has a “mammoth pipe organ” that isn’t leaving anytime soon. “We don’t feature it every Sunday,” Yeaton says, but it plays a role in Sunday worship, which can range in style from traditional to contemporary, with some occasional bluegrass worked in.

And its 900-seat sanctuary can host special events, such as a concert by Kristyn and Keith Getty (cowriter of “In Christ Alone”) this past Sunday.

The size and location of the facility “allows us to be a big community partner. We’re very accessible.” One thing First Christian does is work in conjunction with some other churches to host a monthly meal for the homeless.

Walk around First Christian and you’ll notice a good amount of biblical symbolism [see sidebar]. Yeaton says he encourages staff and church members to be “conversant” about that architectural symbolism and the church’s history, which goes back to 1855.

Yeaton says his work with First Christian, some recent personal experiences, and living in a city like Columbus have given him greater appreciation for the value of beautiful things. And there is a sense of pride in having a beautiful building like First Christian’s, but “the facility cannot be divorced from the mission.”

He understands that thousands of people who rarely, if ever, attend church visit Columbus and First Christian each year and admire its architecture. It’s not exactly evangelism or outreach, but he sees value in it.

Why First Christian? Why Columbus?

Columbus, Indiana, offers “world-class architecture and small-town charm,” the city’s website says. “This small, friendly town is a virtual museum of modern architecture with works by some of the most enduring names in architecture, like I.M. Pei, Richard Meier, Robert Venturi, Eliel and Eero Saarinen, Harry Weese, and Deborah Berke, just to name a few.”

Eliel Saarinen was recruited for the First Christian Church project by J. Irwin Miller, who was then a member of the church. Miller became general manager of Cummins Engine Company in 1934, and led the company for four decades. (Miller’s great-uncle was a banker who loaned money to Clessie Cummins to help start the business, which is now a multinational, Fortune 500 company.)

According to www.Cummins.com: “In 1954, Miller established the Cummins Foundation, and three years later offered the city of Columbus that the foundation would pay all architect’s fees for new construction—leading to buildings by leading architects from around the world gracing the streets of the Midwestern city.”

The Miller House and Garden, a mid-century Modern home designed by Eero Saarinen, is located across the street from First Christian Church.

There are approximately 60 modern architectural buildings of note in Columbus, seven of which are classified as National Historic Landmarks, including First Christian Church (1942), the Miller House and Garden (1953), North Christian Church (a Disciples of Christ church designed by Eero Saarinen (1964), and First Baptist Church (1965).