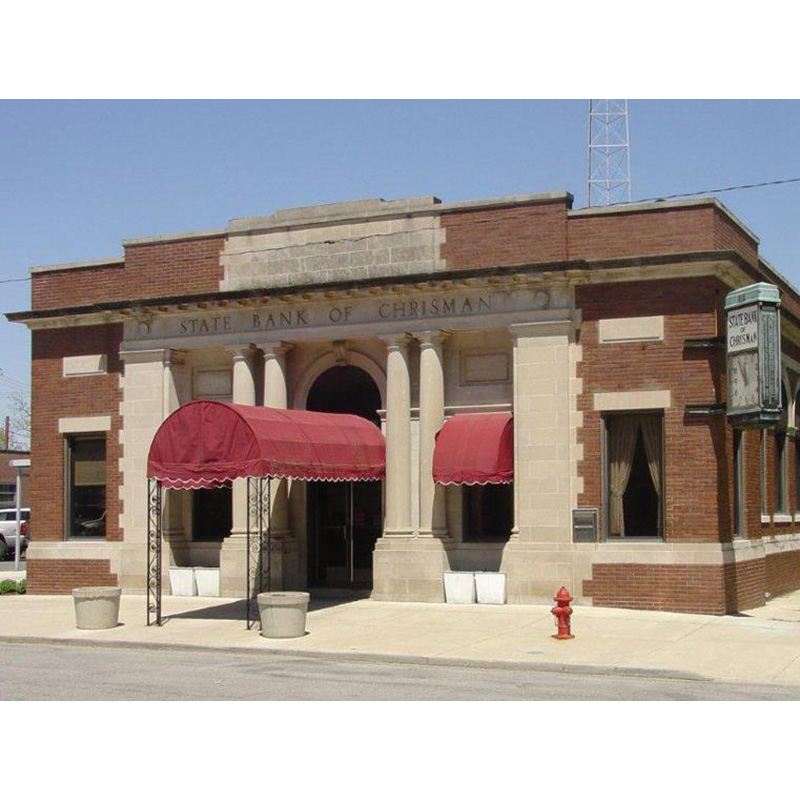 A Christian church in Illinois recently was given a former bank building as a place to expand its food pantry.

The Longview Bank and Trust donated its former branch building in Chrisman, Ill., to Chrisman Christian Church. The building is adjacent to the church facility.

Larry Henson, chairman of the church, told the Independent News that the church planned “to convert the old bank into a new food bank.”

According to its website, Chrisman Christian Church has a “Gather Round the Table” ministry that includes the food pantry and a backpack program that provides food to children each weekend during the school year. The church also has a summer lunch program.

The Longview Bank and Trust recently built a new bank branch in Chrisman and closed the old branch in July. The original branch was constructed in 1917.

“The church asked the bank board to consider a donation of the building a few months ago,” bank president Bill Glaze told the Independent News. “We quickly realized this was a great way to repurpose the building as it will continue to serve the community as it has for the last 100 years.”

In his article “The Pocket Superhero,” Greg Pruett of Pioneer Bible Translators notes that a gift of $38 will fund translation of one verse of Scripture in the heart language of a people group that has no Bible. Learn more at PioneerBible.org.

The church decided to change its name for a couple of reasons, according to a story in the Daily Times. First, the church often was confused with another church nearby—Blount Community Church. Second, the church is located on Partnership Parkway and wanted to reflect its location so it would be easier for people to find.

But the name change has even more significance than that, according to pastor Mark Howard. The church took its cues from Philippians 1:5: “Because of your partnership in the gospel from the first day until now.”

“Even though we didn’t choose a biblical name, we are not trying to distance ourselves from our roots,” Howard told the Daily Times. “This is giving us an identity of who we are now rather than who we were 20 years ago.”

The 22-year-old church took its original name because it is located in Blount County. The process of changing the church name took more than a year.

The 2018 International Conference on Missions will take place next week, Thursday to Sunday, Nov. 15 to 18, in Cincinnati. Click here to register. The theme is “Undhindered.” According to an ICOM tweet, today is the last day to register online, buy meal/event tickets, and sign up for pre-conference training. After today, registration reopens onsite at 3 p.m. next Thursday (Nov. 15).

One of Christian Standard’s regular writers, Steve Carr, will host an ICOM two-part Super Session, “Getting the Church Engaged,” that will introduce attendees to a “panel of ministry experts who have developed programs and methodologies designed to keep missions on the forefront of the church’s consciousness.” The sessions will be from 2 to 4 both Friday and Saturday in Junior Ballroom A on the third floor of the Duke Energy Convention Center. Learn more here.

First Christian Church in Huntington Beach, Calif., is participating in the national “Be Rich” campaign.

The three-week campaign, sponsored by North Point Ministries, encourages congregations to get involved with local nonprofit organizations in their communities. The three themes of the campaign are Give, Serve, and Love.

“It’s an opportunity for us to specifically love and serve and engage the world and the cities that we live in,” FCC senior pastor Scott Martin told the congregation in a Facebook video.

FCC launched its campaign on Sunday by encouraging members to give $39.95 per person in their families to the church, which in turn plans to donate 100 percent of it to local initiatives.

Martin said some of the proceeds would go to the church’s Thanksgiving-in-a-Box meals that it gives away locally, as well as to help fund a meal-packing initiative that will be distributed internationally. The rest of the proceeds will be given to local charities. Learn more here.