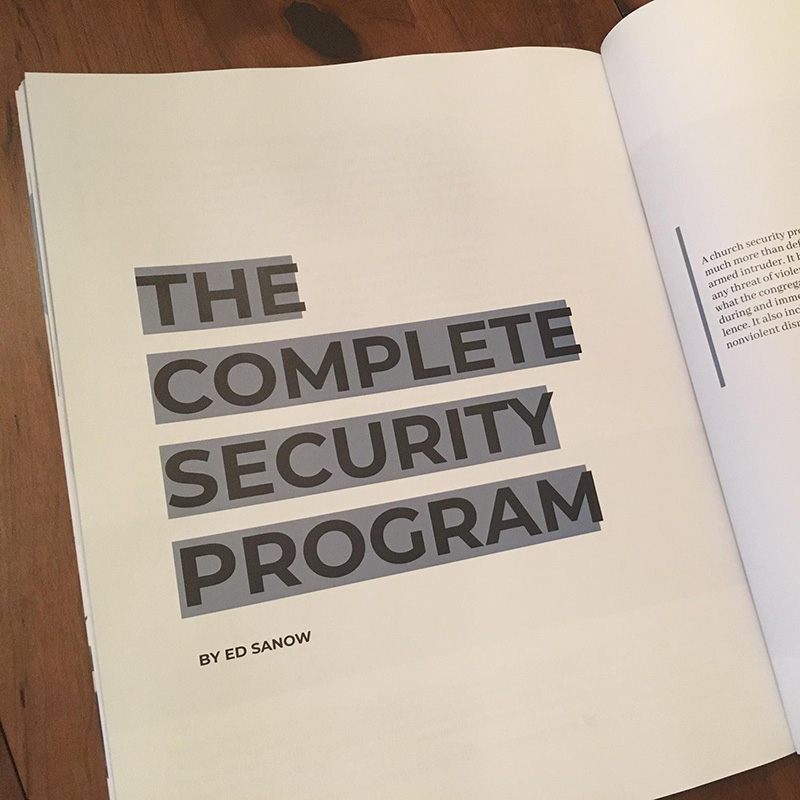 A church security program involves much more than defending against an armed intruder. It begins long before any threat of violence and includes what the congregation should do both during and immediately after the violence. It also includes how to handle nonviolent disruptions in a godly way.

Assure All Doors Are Locked or Staffed

The safety of church members begins with the control of building access. Tour the entire campus to identify every entrance door. Then decide if each door should remain (1) locked from the outside or (2) opened and staffed by greeters. Those are the only two choices.

Locking most outside doors is a critical first step. In the church shooting in Antioch, Tennessee, in September 2017, a masked man shot a person in the parking lot and then entered the church through an unlocked back door and shot six more people.

The doors that remain open from the outside must be staffed by greeters, and not merely monitored by surveillance cameras. A trend among our churches is to lock even these open doors once the services begin. Of course, some of the now-locked doors are staffed by greeters for people who arrive late.

Leadership is obligated to provide training for people who are selected to take a more active role in the churchâ€™s security. The second step in the security program is greeter training. Greeters will continue to be warm and welcoming, but to these will be added the responsibility of â€śguardian.â€ť

As guardians, greeters will rely, in part, on their life experiences, but they also need training in what to look for among those entering the church: unusual emotions, behavior, and apparel. Greeters need to take in the â€śtotality of the circumstances.â€ť Any one indicator by itself could be innocent enough, but three or four flags together raise cause for concern.

Greeters should (1) observe people continuously and purposefully, (2) make a reasonable threat assessment of each individual, and (3) take immediate action, if necessary, based on their assessment. The greeter will not take action by confronting a questionable individual themselves, and they will not be distracted away from their door; instead, they will notify the safety team of any concern.

Remember, this is a church service, not a sporting event. The way the safety team handles disruptions will have an immediate effect on the churchâ€™s reputation. Social media is ruthless and unfiltered. Cell phone cameras are everywhere. Safety team members must conduct themselves with a godly attitude. This means selecting the right safety team members is critical.

A person who abruptly stands up during a worship service and begins to boldly read a chapter out of the Bible is commiting a nonviolent disruption. The safety team needs to take the cue from the senior minister on what to do, meaning the ministerial staff and safety team must train together.

The safety team should get a wide variety of de-escalation training. Anger management (conflict resolution) training may be available through a local womenâ€™s shelter, YWCA, or wherever the court orders domestic violence subjects to take training. Training to deal with emotionally disturbed persons may be available through groups like the National Alliance on Mental Illness (www.nami.org).

Autism awareness training, which is widely available online, offers helpful approaches for handling these types of situations. If the safety team can successfully deal with someone in higher levels of autism (a developmental disorder), they will also be able to deal with people suffering from a wide variety of clinical mental illnesses. The approach is the same.

The safety team must have a clear idea of what constitutes the crime of battery in their state. In California, for example, battery is defined in part as â€śthe use of force upon another person, even if there is no injury. . . unwanted or offensive touching of another person.â€ť A local law enforcement agency or prosecutorâ€™s office may agree to provide this sort of legal training.

The safety team should also get some training in â€śsoft, empty-hand controlâ€ť tactics. The team must know how to move people in a controlled way, without hurting them, and without causing a social media scandal. The defense tactics instructor with local law enforcement may be able to help.

Prepare for an Armed Response

People who serve in a safety program recognize they cannot prevent violence from starting, though they may be able to interrupt it. An attacker can easily enter a church carrying multiple concealed weapons. The attacker can empty a concealed pistol before anyone knows shots have been fired.

An active-shooter-event reality is this: It takes a gun to stop a gun. To prepare for that armed response, think in terms of good, better, and best.

The â€śgoodâ€ť option may be church members with a concealed carry permit plus firearms training. They should â€śqualifyâ€ť for firearms training on the same schedule as local law enforcement, which is about twice a year.

They should also take the same number of in-service â€śtrainingâ€ť hours as required of police officers by their state. This varies from 16 to 28 hours per year, and can include a wide variety of use-of-force topics.

The â€śbetterâ€ť option may be church members who possess a state-issued concealed carry permit plus a background in emergency services or the military. Such a background demonstrates a person is capable of making decisions under high-stress situations. Possessing a concealed carry permit is definitely not enough. Self-defense is entirely different than defending the public.

An officerâ€™s radio communications far exceed a civilian with a phone. Perhaps best of all, the liability for an officerâ€™s actions all revert back to their agency, not the church, even though the church is employing them.

Anything less than one of these three options is â€śnot good.â€ť

Train Church Members How to Respond

Imagine this scenario: The unthinkable is suddenly happeningâ€”someone has opened fire inside the church. Studies of shooting events show that people under attack who remain seated have been shot where they sit. That said, few of the so-called â€śactive shooterâ€ť programs actually tell church members what they should do when someone begins shooting.

The FBI and Texas State University have developed the new national standard called Citizenâ€™s Response to Active Shooter Events. The old â€śrun, hide, fightâ€ť advice has been upgraded to â€śavoid, deny, defend.â€ť Avoid the attacker. Deny access to your location. Defend yourself. See the 11-minute video at www.AvoidDenyDefend.org.

What should church members do when someone begins shooting? The short answer is to immediately evacuate. The mass confusion of an active shooter event actually causes a â€śdivided attention challengeâ€ť for the shooter. Moving targets are harder to hit than stationary ones. The brutal lessons from recent church shootings, and also the 2007 Virginia Tech shootings, are that if you do nothing, you will be systematically shot.

In a high-stress situation such as this, the natural inclination is to exit the building where you entered it. The Great White concert fire in 2003 in West Warwick, Rhode Island, is a tragic example that people do not go to the nearest exit or look for other exits. Instead, people under stress see only one exitâ€”the same door by which they entered. Church members must be trained to see all exits.

The federal government has developed emergency first-aid training for situations where one or more ambulances may be delayed or where casualties are numerous. These programs are called â€śStop the Bleedâ€ť by the Department of Homeland Security and â€śYou Are the Help Until Help Arrivesâ€ť by the Federal Emergency Management Agency.

Both programs emphasize the need for tourniquets, and that a tourniquet be applied by the person sitting next to you. If a major artery is severed, the injured person has only five minutes to live unless someone intervenes. By contrast, from first gunshot until an EMS worker can begin administering aid will take about 15 minutes. Once the shooting stops, the survivors must help the injured and dying. You are the help until help arrives.

The lesson from the church shooting in Sutherland Springs, Texas, in November 2017 is that no church is too small to be a target. That, in part, is why IDES offers Safe Worship training, which we have presented in churches from Florida to Alaska. The safety steps these churches have taken give members the peace of mind to devote their full attention to worship the Prince of Peace.

Ed Sanow, director of training for IDES, is a 32-year veteran of law enforcement, a Texas State University/ALERRT-certified trainer for Citizenâ€™s Response to Active Shooter Events (CRASE), and a member of the Oxford (Indiana) Church of Christ.

For more information on Safe Worship training from IDES, go to www.ides.org/safe-worship.html.