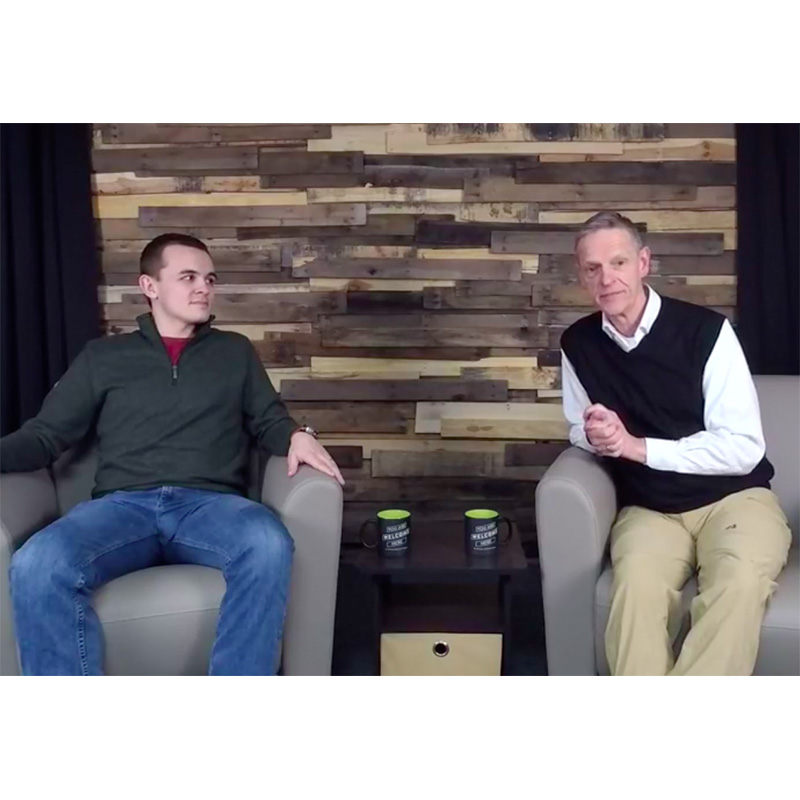 Plainfield (Ind.) Christian Church is “bridging the gap” between Sundays and working to connect with people who might otherwise never enter their church through its Weekday Chat on Facebook Live at noon every Wednesday.

The show serves multiple purposes, including allowing two of the church’s ministers to sit down weekly to “dig deeper” into the topic they covered the previous Sunday while also providing a preview of the next message.

Associate preaching minister Luke Proctor admits that, by midweek, he sometimes has trouble recalling the focus of his message from Sunday, so he imagines many in the church also need a memory boost.

“Weekday Chat has proven to be a good way to draw it back into the church’s consciousness,” says Proctor, who has served with Plainfield for two years.

The three mainstays of the program—the “on-camera” talent, if you will—are Proctor, senior minister Steve White, and global and local impact minister Riley Weaver. The casual setting and conversation allow viewers to see a different side of their ministers. At the same time, it allows those three, and some other leaders—the lineup varies—to share thoughts, examples, and anecdotes that weren’t a part of the service.

“We’ve gotten great, great feedback,” says Proctor. “It has blown my mind the impact I have seen.

“I was visiting with a lady in the hospital a couple of weeks ago. She has cancer and hasn’t been to church for a while,” Proctor says. “She thanked me specifically for the Weekday Chats. She was more thankful for the chats than the sermons [available at the church’s website], because the chats are more application-focused. It was one thing that gave her a boost before her treatments.”

Ferguson says Proctor and Weaver are younger and, as such, are more comfortable with the Facebook Live format and being in front of the camera. White, who has served with PCC since 1987, needed to be convinced of the value of it.

“You know, Steve is a regular guy . . . a humble guy,” Ferguson says. “He’s not a big fan of being on camera. [But] he’s about doing anything to reach people with the gospel message.”

The show has evolved somewhat since debuting July 11, 2018. Initially it was thought viewers would ask questions relating to the previous Sunday’s sermon, and that the “live” aspect would be more interactive. But it hasn’t played out that way.

Most viewers watch the 15-minute (or so) Weekday Chat later in the week, Ferguson says. That, in itself, limits live interaction. However, Proctor says, it’s common for later viewers to engage with staff in a more general way via the “Comments” function.

Proctor is especially enthusiastic about the show’s weekly viewership—about 1,400—in light of the weekly average attendance at PCC—1,800 to 2,000.

The church’s media coordinator, Ashley Vallosio, takes the lead in bringing the program together.

Vallosio listens carefully to the sermon and then “she’ll write up an outline,” Ferguson says. “She’ll think about how we can take a deeper dive into the topic.”

“Ashley really puts the ball on the tee for us,” Procter says. “It’s hard to swing and miss.”

“We’ll spend 15-20 minutes just making sure we’re all on the same page and that everything is working,” Ferguson says.

To make the show “happen,” all that is needed is a smartphone (on a stand), an Internet connection, and a Facebook account, Ferguson says. That’s how Plainfield Christian Church started their production.

Over time, the media team has worked to improve the audio (there were a few early complaints) and has invested in a device known as a Mevo camera.

“The Mevo enables us to synchronize to our Facebook page,” Ferguson says. “It enables us to use one camera [but still] break up a stagnant shot.” In short, the single, stationary camera provides the wide shot of both ministers as well as the closeups of the individual ministers.

Weekday Chat has become part of the “rhythm” of Plainfield Christian, and perhaps—due to busy schedules—“our only chance for a midweek touch” with some people in the church.

“This is an attempt to meet people where they’re at,” Ferguson says. “This is acknowledgment that Facebook is a place where people are.”

The end goal is to use available technology to help lead people to Christ.

“We’re always trying to engage people in the digital community and lead them to in-person community,” Ferguson says.

Some Dos and Don’ts of Producing a Weekly Show

Kyle Ferguson, Plainfield Christian Church’s director of media arts, suggested these “Dos and Don’ts” for other churches that might be interested in producing something similar to Weekday Chat.

Start somewhere. You don’t need the latest and greatest gear to do a Facebook Live broadcast. Just a phone and a Facebook page!

Have a plan. Be intentional with the content and consider directing people to a specific next step, even if it’s a simple one.

Have fun. Social media is a chance for people to see behind the scenes of your church. Be yourself and have fun with it.

Tell stories. Stories are the best way to connect with people in our culture. Facebook Live is a great platform to tell stories of how God is working in and through his people at your church.

Overpromise and underdeliver. Don’t advertise a weekly Facebook Live broadcast if you are not able to create the margin to plan and execute.

Be afraid to change. The digital landscape is constantly changing, so don’t be afraid to evaluate and change what you’re doing to be more effective.

Forget the goal. Your goal should not simply be to use Facebook Live, but to provide people with helpful content / a midweek touch / encouragement / a next step.

Be a megaphone. Facebook Live is a great platform to use as a tool to interact with people, not just to broadcast information. It is called “social media” for a reason!