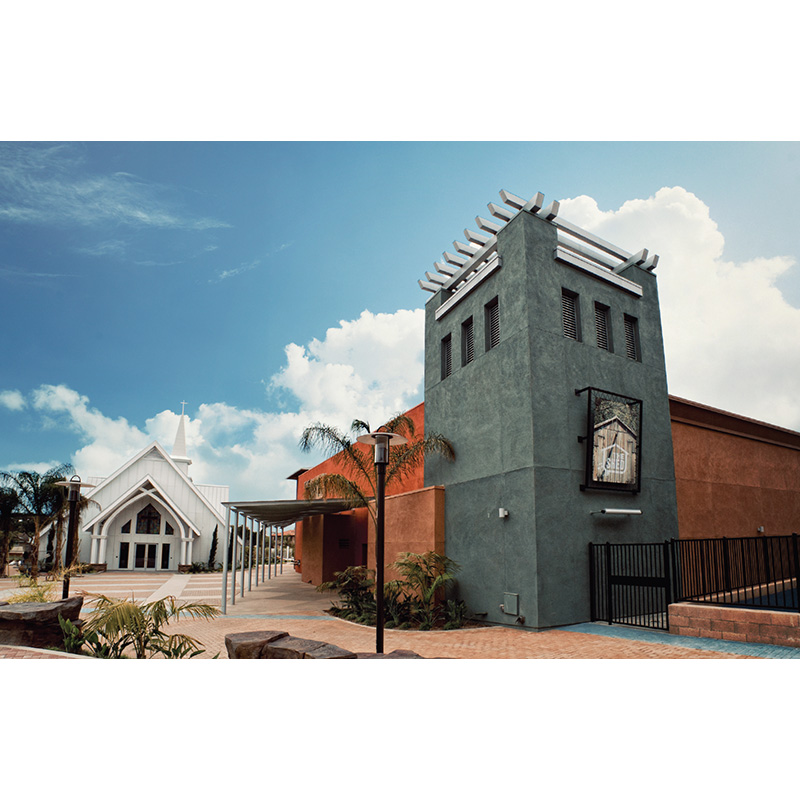 The Vital Role of Setting in a Church’s Master Plan

Imagine a 2,400-member church that has a rare and beautiful, four-acre setting on the Main Street of Surf City USA, and just down the street from where Huntington Beach Pier juts out over the Pacific Ocean.

Not long ago, if you drove by that church—yes, it’s real—all you would have seen was the brick backside and moss-covered roof of a dated A-frame sanctuary. It was so closed off, some area residents thought the century-old church had disbanded.

So, when First Christian Church asked for navigational design help to get through the next 100 years in Huntington Beach, California, I jumped at the chance to work with them while I was employed by Visioneering Studios, who is the architect-of-record, designer, and master planner for the project. I mean, it’s Surf City USA. What’s not to love?

On this project, Visioneering Studios took extra time to study the complex Huntington Beach setting. We had to fully understand its history and anticipate its future to instill just the right experience to the church’s master plan. PlainJoe Studios’ provided environmental graphics, theming, and signage that fit this setting.

Prior to 2000, Huntington Beach—with its mild climate and miles of sandy beaches—was known as a laid-back, easygoing surf town. The 1,850-foot pier, built in 1902, is the second-longest on the West Coast and remains the center of the city’s prominent beach culture. Residents of Huntington Beach embrace the outdoors and sunshine.

But a significant shift happened over the past few years. The city began to embrace its position as a popular tourist destination. In 2006, the city fought for the “Surf City USA” trademark; and in 2015, Time named Huntington Beach the “Best Beach in America.” A large retail center was built on the former site of the 1960s vintage town center. Another center with shops, restaurants, and hotels opened near the beach in 2009. And in 2016, Pacific City, a 31-acre site of unique shops, upscale dining, a four-star hotel, and luxury apartments, opened across from the famous pier.

The waves at Huntington Beach are consistent, but not huge; they attract surfers from all over. The U.S. Open of Surfing draws more than a half-million visitors each year. The long pier provides a unique vantage point to watch the competition. It’s no wonder Huntington Beach has become a vital Southern California tourist attraction.

“I grew up in Huntington Beach,” says Curtis Templeton, a former staff member at First Christian and son of former senior minister Bruce Templeton. “It has revolutionized from a laid-back surf town to a modern tourist destination for a new generation.”

“With all the new retail space on Main Street, we wanted to move people from consumerism to connection at FCC,” says Curtis, who was a project manager during construction. “Our goal was to have them walk straight onto our campus from Main Street and be able to engage right away, feeling that the environment didn’t change. To do that, we had to leap forward from where we were [for] about 50 or 60 years. Not an easy thing to do.”

A strategic, phase-by-phase “design intervention” was required and provided by Visioneering Studios. Rather than the “neo-Taco Bell” aesthetic many newer developments in the city were cutting-and-pasting, the design team dug deep into the history of the town once named Pacific City. Urban planner Art Cueto participated in a complicated design and approval process, allowing the design team a more eclectic look that blended Coastal Craftsman, Victorian, Mediterranean, and contemporary elements.

Upon its approval, the design team started with kids’ environments, then a multiuse facility for middle and high school students, and then offices for staff above a coffee shop and bookstore. And what became of that brick A-frame? We reroofed and added a steeple and white Victorian board and batten details to create a postmodern homage to the church’s original historic structure. We moved the original bell of the chapel to the courtyard to honor the church’s rich history.

“What is so incredible about the setting of FCC is God’s undeniable, mind-blowing, and amazing creation there,” says Johnny Davis, creative director of Spatial Storytelling at PlainJoe Studios. “I wanted people to experience the majesty of his creation as they walk from the pier down Main Street and all the way through the First Christian Church campus.”

People now see a vibrant beach environment that blends in with Main Street but also pops enough to be noticed. Visioneering Studios’ design kept the traditions and reverence to the history of the church while creating a beach cottage and bungalow feel, but with a modern appeal to the future of Huntington Beach. People are invited to walk in and experience authentic community. Guests can just sit and hang out, grab a coffee, and chat with friends as the kids play.

“We found fresh ways to connect with people who had never been to church before,” Curtis says. “The chapel became an icon to the community, and we tripled our engagement almost immediately.”

The church also takes part in community events, participating in a massive Fourth of July parade along Main Street and putting on a drive-through, living Nativity every Christmas.

Next year First Christian Church will be 125 years old. That’s pretty amazing! We celebrate with them and are thankful we had the opportunity to work with them and Visioneering Studios and the beautiful creation God provided in Huntington Beach.

EDITOR’S NOTE: Some parts of this article were revised after the original article was posted.

First Christian Church of Huntington Beach is passionate about “leading people to recklessly follow Jesus.” Find them at fcchb.com.