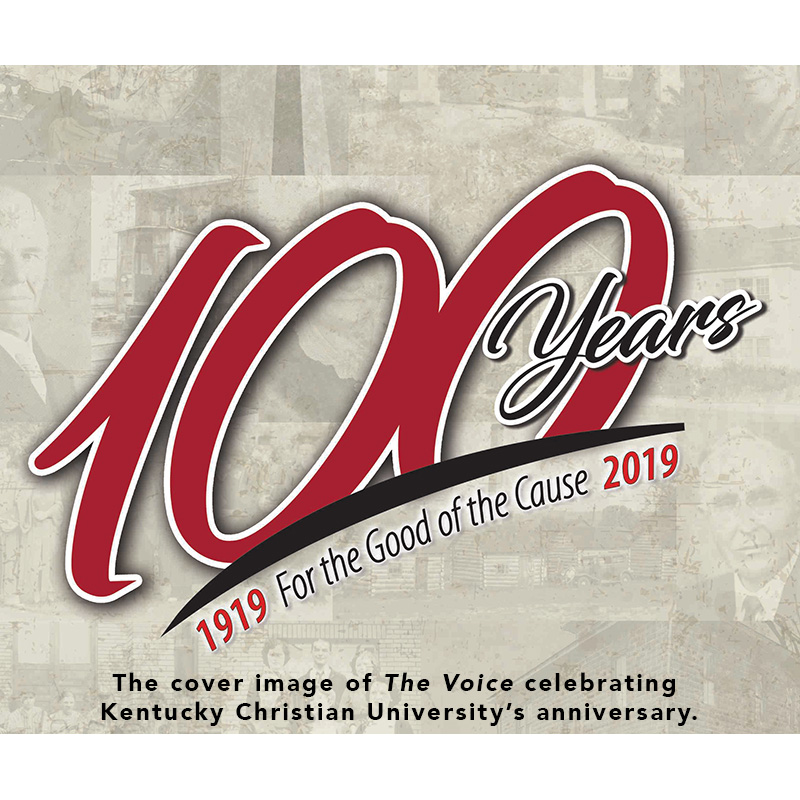 Kentucky Christian University in Grayson will celebrate its 100th birthday during Fall Homecoming Sept. 27-29, and again on Dec. 1, the actual anniversary of its founding.

“We are excited about turning 100,” said Jeff Greene, director of development, alumni, and church relations. “I find it amazing that in this part of Appalachia we have made such an impact for the kingdom,” said Greene, citing the many ministers, missionaries, and Christian leaders and workers KCU has produced during the past century.

An extra-special worship service and reception is in the works for Dec. 1 that will feature alumni, churches and their representatives, and other dignitaries. Go to www.kcu.edu to stay in the loop.

History: J.W. Lusby and J.O. Snodgrass cofounded Christian Normal Institute on Dec. 1, 1919. Lusby had been involved in education in Grayson since 1905; in the Sept. 7, 1918, edition of Christian Standard, he advertised anonymously [see above] for a partner to start CNI, and Snodgrass, of Iowa, responded. In its earliest days, CNI included both high school and junior college programs, as well as emphasizing preparation of public school teachers. According to www.kcu.edu, the teacher education focus was phased out during the early 1920s, “at which time the education of young people for Christian ministries became the central purpose.” The name was changed to Kentucky Christian College in 1944 and then to Kentucky Christian University in 2004.

(For more history, check out the KCU’s magazine, The Voice, and the “Our Heritage” page at www.kcu.edu.)

Lincoln (Ill.) Christian University will host graduation ceremonies on May 4, the very day it was founded 75 years ago.

A special highlight is that Zach Thompson, great-grandson of college founder Earl C. Hargrove, will graduate that day with his preaching degree and will speak during the ceremony, said Don Green, LCU’s seventh president.

Also, Green said, two former college presidents who were part of LCU’s class of 1969 will participate in graduation ceremonies: Richard Wamsley will give the charge at this year’s undergraduate commencement, and Ken Idleman will speak at the seminary/graduate commencement in the afternoon.

A focus on the 75th anniversary will be big part of Homecoming on Friday and Saturday, Oct. 4 and 5.

“We’re trying to reach out to all of our groups that were formed on campus . . . to bring them all back so they’ll have a chance to reconnect with everyone,” Laughlin says. There will be times for worship and time for reconnecting. Go to lincolnchristian.edu to make sure your group is represented.

History: LCU was founded as Lincoln Bible Institute in 1944 by Earl C. Hargrove, preaching minister of Lincoln Christian Church. When started, the school was to prepare preachers, teachers, and other Christian workers; it quickly became known as a training ground for all Christians—no matter their vocational goals—according to the history page at lincolnchristian.edu.

Great Lakes Christian College, Lansing, Mich., plans to celebrate its 70th anniversary on Friday and Saturday, Oct. 18 and 19. Plans are still being developed, but the college has asked folks to submit stories and memories via its website, glcc.edu.

History: The school started in a log cabin at Rock Lake, near Vestaburg, Mich., in 1949. The cabin’s owner, Ralph R. Woodard, was the college’s first president. Twelve students were enrolled that first year at Great Lakes Bible College, as it was originally known. In 1951, the college purchased an 80-acre farm nearby and converted it into the first campus. In 1958, trustees decided to move to the capital city, Lansing.

Great Lakes occupied the Dodge Mansion for 14 years, and then moved to the west edge of Lansing in the early 1970s.

In 1992, the school was renamed Great Lakes Christian College, and in 2003 it received accreditation with The Higher Learning Commission, a member of the North Central Association of Colleges and Schools. (Read more about GLCC’s history on the college’s website.)

Mid-South Christian College in Memphis, Tenn., plans to celebrate on Friday and Saturday, Sept. 20 and 21. The festivities will kick off with an alumni luncheon at noon Friday, and include the 60th Anniversary Celebration Banquet at 6:30 that evening featuring Bob Russell, former senior minister with Southeast Christian Church in Louisville, Ky. Adult children of former presidents of the college will attend.

Writes current president Larry Griffin: “‘Take Up Your Cross for the Next 60’ is our theme for setting the stage for the future growth and ministry of MSCC. . . . We will worship together, eat and fellowship together, remember and dream together. . . . It will be a weekend to remember!” Learn more at www.midsouthchristian.edu.

Vernon Newland, then academic dean of St. Louis Christian College, led in its establishment and became MCC’s first president. A group of about 40 Christian leaders from several states selected the location and name. Classes were held in the Oakhaven Christian Church building until 1964, when the college established a campus in southeast Memphis. In 1973, the college moved to a 160-acre site in rural northwest Mississippi and changed its name to Mid-South Christian College.

During the years in Mississippi, the college developed significantly in many ways, but enrollment did not keep pace. (The isolated campus was thought to be a reason.) MSCC returned to Memphis in 1987 and then returned to its original campus location in 1990. (Read more about MSCC’s history here.)