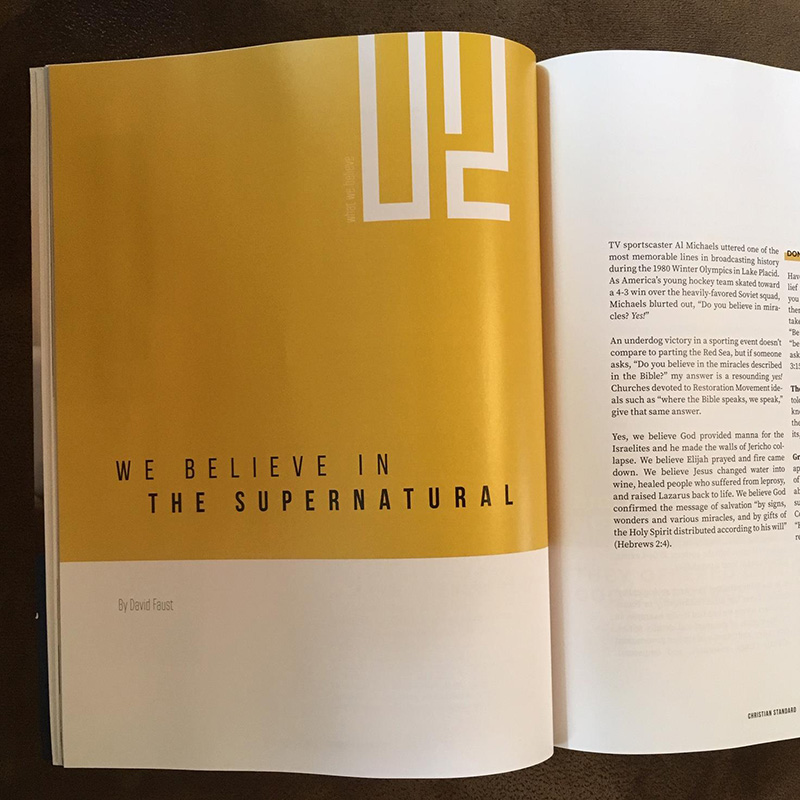 TV sportscaster Al Michaels uttered one of the most memorable lines in broadcasting history during the 1980 Winter Olympics in Lake Placid. As America’s young hockey team skated toward a 4-3 win over the heavily-favored Soviet squad, Michaels blurted out, “Do you believe in miracles? Yes!”

An underdog victory in a sporting event doesn’t compare to parting the Red Sea, but if someone asks, “Do you believe in the miracles described in the Bible?” my answer is a resounding yes! Churches devoted to Restoration Movement ideals such as “where the Bible speaks, we speak,” give that same answer.

Yes, we believe God provided manna for the Israelites and he made the walls of Jericho collapse. We believe Elijah prayed and fire came down. We believe Jesus changed water into wine, healed people who suffered from leprosy, and raised Lazarus back to life. We believe God confirmed the message of salvation “by signs, wonders and various miracles, and by gifts of the Holy Spirit distributed according to his will” (Hebrews 2:4).

DON’T MAKE A ‘SKEPTACLE’ OF YOURSELF

Have you ever met someone who considers belief in the supernatural naïve and outdated? If you encounter such individuals—let’s nickname them skeptacles (“skeptic” plus “miracles”)—take their questions seriously. Scripture says, “Be merciful to those who doubt” (Jude 22), and “be prepared to give an answer to everyone who asks” the reason for your hope in Christ (1 Peter 3:15).

The Jewish Sadducees were skeptacles. Jesus told them, “You are in error because you do not know the Scriptures or the power of God” (Matthew 22:29). They didn’t believe in angels, spirits, or the resurrection (Acts 23:8).

Greek philosophers were skeptacles. When the apostle Paul preached in Athens, some members of the audience sneered when he got to the part about Jesus’ resurrection (Acts 17:32). This anti-supernatural worldview infected the church in Corinth, moving Paul to ask in astonishment, “How can some of you say that there is no resurrection of the dead?” (1 Corinthians 15:12).

America’s third president was a skeptacle. Thomas Jefferson held Jesus’ moral teachings in high regard, but he didn’t accept the miracles recorded in the Gospels. According to a Smithsonian magazine article by Owen Edwards (January 2012), Jefferson took a sharp instrument and literally cut and pasted together his own version of the New Testament. The resulting 84-page document, bound in red leather and titled The Life and Morals of Jesus of Nazareth, includes some of Jesus’ life and teachings, but omits supernatural references like the feeding of the 5,000. It includes Jesus’ burial, but not his resurrection.

TV personality Bill Maher is a skeptacle. In a 2008 interview with the New York Times, Maher said, “It’s not that there are no miracles. A tree is a miracle. You’re just used to it. . . . All the essentials of religion that are in the Bible or the Koran—we’re used to them. But it doesn’t mean they’re not crazy, doesn’t mean they’re not ridiculous. And so to be religious at all is to be an extremist, is to be irrational.”

Liberal biblical scholars tend to be skeptacles. As the Restoration Movement was gaining momentum on the American frontier in the 1800s and early 1900s, a stream of biblical scholarship influenced by theologians like Rudolf Bultmann contended that history is a closed continuum of effects untouched by supernatural powers. They set out to “demythologize” the Gospels, suggesting that the wonders attributed to Jesus in the New Testament probably could be explained by natural laws if all the facts were known. Conservative students of the Bible, though, could not accept this approach. In his book Union in Truth (Standard Publishing, 1994), James B. North tells how Restoration preacher Z. T. Sweeney challenged H. L. Willett to a debate. Willett was a prominent liberal among the Disciples of Christ. The debate never happened, however, because the two men couldn’t agree on the definition of a miracle. To Willett, a miracle was merely “the unusual but normal activity of a perfect life in the domain of nature.”

Some of today’s religious leaders are skeptacles. When I was a young minister in New York, I got to know a Jewish rabbi from a Reformed synagogue known for its liberal views. When I mentioned my confidence in the Bible, the rabbi asked incredulously, “You actually believe Jacob wrestled with a real angel?” I nodded, and he shook his head in amazement, while a minister from a mainline Protestant church joined in the mockery.

Can we reasonably believe in the miracles described in the Bible? Here are three key questions to consider:

1. Does God exist? Yes! The creator described in Holy Scripture is the “uncaused cause,” the author of life, the foundation of morality, and the architect of the marvels of DNA. God has revealed himself through nature, through Scripture, and through the Living Word who became flesh and entered human history (John 1:14-18; Hebrews 1:1-3). If you accept Genesis 1:1 as true, it’s reasonable to believe that on rare occasions the God who created the universe can intervene and alter a natural process by the exercise of his divine will. Miracles don’t violate the principle of cause and effect, they simply introduce a supernatural cause into the pattern. If God exists, miracles are at least a possibility.

2. Is the Bible reliable? Yes! Archaeological evidence proves the Bible trustworthy in countless areas where we can test it—for example, in its description of geographical details (cities, mountains, and rivers) and ancient government officials (kings, governors, and emperors). Unless you are biased against the supernatural, why wouldn’t you accept the Bible’s testimony about miraculous events?

• Miracles are woven inseparably into Israel’s history in the Old Testament and the growth of the church in the New Testament. Apart from God’s supernatural intervention, these historical facts are difficult to explain.

• Fulfilled prophecies found in Scripture are themselves a kind of miracle because they demonstrate supernatural foreknowledge of future events.

Jesus promised that the Holy Spirit would guide his apostles “into all the truth” (John 16:13). We believe “prophets, though human, spoke from God as they were carried along by the Holy Spirit” (2 Peter 1:21).

3. Did Jesus rise from the dead? Yes! The entire Christian faith depends on this supernatural event. We declare “Jesus is Lord” because we believe “God raised him from the dead” (Romans 10:9). The resurrection distinguishes Jesus from all other religious leaders. Jesus predicted his own resurrection and considered it the ultimate proof of his identity as the Messiah. If he didn’t rise from the dead, the Master Teacher was mistaken about his main message. “And if Christ has not been raised, your faith is futile; you are still in your sins” (1 Corinthians 15:17). But because “Christ has indeed been raised from the dead,” our “labor in the Lord is not in vain” (1 Corinthians 15:20, 58).

Hundreds of eyewitnesses saw so “many convincing proofs that he was alive” (Acts 1:3) that even doubting Thomas and skeptics like Saul of Tarsus and Jesus’ brother James were compelled to believe in Jesus (John 20:24-29; 1 Corinthians 15:3-8). The early church grew rapidly as believers confidently affirmed, “He is alive!” [Read the sidebar, “What Would It Take to Raise Someone from the Dead?” available at christianstandard.com.]

• Dunameis (from which we derive our word dynamite) means “mighty works” and emphasizes how God demonstrated his power through supernatural acts.

• Terata (“wonders”) emphasizes the effect of the miracles. Typically, those who observed God’s mighty deeds were filled with wonder and awe (Acts 2:43).

• Semeia (translated “signs” in the Gospel of John) highlights the meaning and purpose of the miracles.

Peter used all three of these words to confirm Jesus’ messianic credentials. He declared, “Jesus of Nazareth was a man accredited by God to you by miracles, wonders and signs” (Acts 2:22). Likewise, Paul saw the ability to perform miracles as a distinguishing characteristic of the apostles. He wrote, “I persevered in demonstrating among you the marks of a true apostle, including signs, wonders and miracles” (2 Corinthians 12:12).

Biblical miracles were not random magic tricks; they offered credible evidence that God’s message was trustworthy. Nicodemus told Jesus, “Rabbi, we know you are a teacher who has come from God. For no one could perform the signs you are doing if God were not with him” (John 3:2).

By contending for biblical miracles, we don’t see the world as a wild place where scientific laws are constantly disrupted. A miracle is a rare exception, not the rule. Jesus multiplied bread and fish, but once eaten, the food was digested in the normal way. After Lazarus was raised from the dead, his body was once again subject to normal processes and pains; in fact, after Lazarus was resurrected, Jesus’ enemies wanted to kill him again (John 12:9-11). [Read the sidebar, “Facts About Biblical Miracles,” available at christianstandard.com.]

Skeptics suggest the following alternative views. We can respond to each with rational and biblical conviction.

• “Biblical miracles were simply the invention of naive, unscientific minds.” Ancient people weren’t fools. When his virgin fiancé became pregnant, Joseph didn’t need a degree in gynecology to know babies don’t come from the stork. James and John didn’t have to be meteorologists to recognize a miracle when Jesus calmed a storm on the Sea of Galilee.

• “Miracles were psychologically induced.” Skeptics postulate that sick bodies weren’t actually healed; people just felt better after encountering Jesus. However, “mind-over-matter” doesn’t explain how Jesus gave sight to a man born blind or simultaneously healed 10 men of leprosy. Practical-minded people with common sense could recognize when life had left the body, so they were astonished (just as we would have been) when Jesus raised the dead (Luke 8:52-56; John 11:38-44).

• “Miracles were private, unverifiable religious experiences.” Jesus did perform a few miracles in relative privacy, but he did many of his mighty works in public in the presence of large crowds (Mark 1:32-34). Even detractors of the faith couldn’t deny the results of Jesus’ supernatural power (Mark 3:1-6; Acts 4:13-22).

Beyond these defenses, Jesus considered miracles important. He told those who struggled to accept his claims, “At least believe on the evidence of the works themselves” (John 14:11).

Miracles don’t convince everyone. Some observers “still would not believe in him” in spite of all the miracles he performed (John 12:37). But many were convinced. The manner of Jesus’ death, including an earthquake and supernatural darkness, even moved the centurion near the cross to confess his admiration for the crucified Christ (Matthew 27:54).

If we read the Bible with an open mind and allow for the possibility of divine intervention, we can recognize God’s purpose and power in the signs and wonders recorded there. The grand Easter miracle validates Jesus’ claims. He was “appointed the Son of God in power by his resurrection from the dead” (Romans 1:4).

So yes, we believe in the supernatural. We agree with John’s conclusion, “Jesus did many other signs in the presence of his disciples, which are not recorded in this book. But these are written that you may believe that Jesus is the Messiah, the Son of God, and that by believing you may have life in his name” (John 20:30, 31).

A longtime columnist for The Lookout and the author of 16 books, David Faust is a staff member at East 91st Street Christian Church in Indianapolis and serves as a leadership advisor with Connection Pointe Christian Church in Brownsburg, Indiana. He has planted and led churches in New York and Ohio and served as president of Cincinnati Christian University.