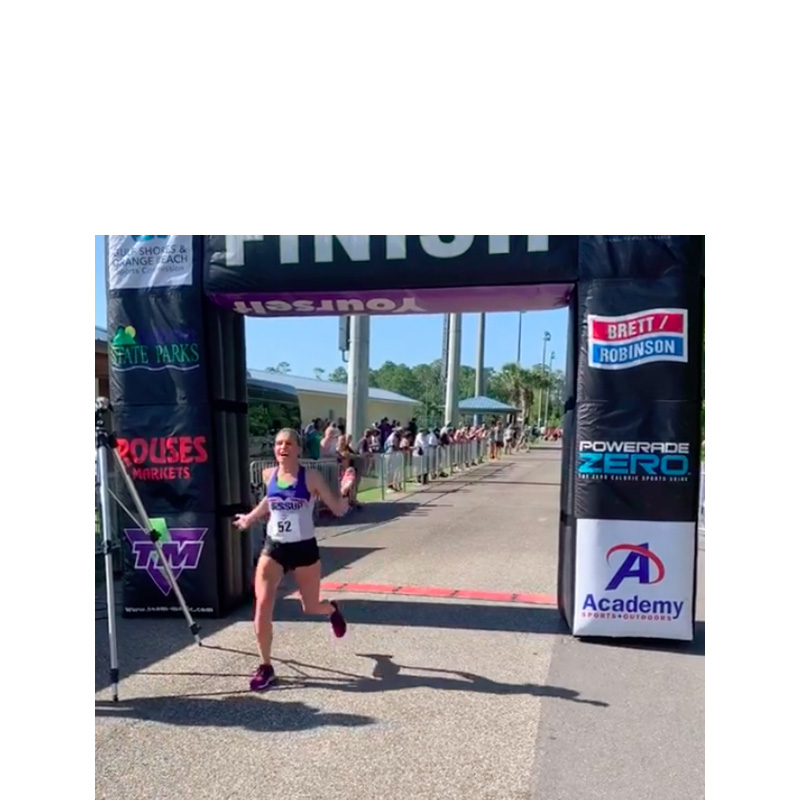 Full-time student-athlete, wife, and mother Bailey Cossentine of William Jessup University won the marathon at the NAIA Women’s Outdoor Track & Field National Championships at Gulf Shores, Ala., on May 25.

Cossentine finished with a time of 3:07.50.64, just 13 months after having a baby. Her time was more than 30 minutes faster than the school record she set two years ago. In winning, she became WJU’s first-ever, first-place NAIA All-American.

“Bailey executed a perfect race plan with her progression through the field of competitors,” coach Jeff Magley said. “She was in control all day and closed the last 10k with great competitive heart and flawless execution.”

After her sophomore year at WJU in Rocklin, Calif.,, the former Bailey Shykowski married Erik Cossentine. Nearly a year later, they welcomed their first child, Matheson, into the world.

“If anyone told me as a freshman that I would have a baby in the middle of my collegiate career, I would have laughed,” Cossentine said in a story on WJU’s athletic website. “No way is that happening!”

But now, Cossentine describes her son as the ultimate victory.

“Every race I run is a culmination and celebration of all the sacrifice it took to get there: the practices, early mornings and late nights, long commutes, time away from my family, and the faith and commitment it took to get on that starting line,”

“Holding my little boy is like holding my heart in my hands; he’s my trophy . . . [he’s] the physical representation of the reason of how and why I run: with my heart wide open and giving everything I have holistically . . . body, mind and spirit.”

﻿Sergio Rizo has joined Stadia Church Planting as resource development director. Rizo is now responsible for sharing the global need for new churches with church leaders, business leaders, and anyone else who has a heart to see every child have a church.

In January, Stadia announced it would provide its services to church planters with no strings attached in order to see more and better churches planted. This has dramatically accelerated the number of church planters the organization is working with. Rizo will help develop and deploy strategies that will connect people and their investments to the vision of Stadia Church Planting.

Christ’s Church in Mason, Ohio, held a visitation on Saturday for four local homicide victims. The Journal-News reported four hearses sat outside the church as a large crowd of mourners, many from the local Sikh community, gathered to pay their respects. A police investigation into the homicides is ongoing.

﻿Southeast Christian Church opened its seventh campus on Sunday. The former River Valley Christian Church in Goshen, Ky., was added as a branch of the Louisville megachurch. It is the first time that SECC has expanded its footprint through a church merger.

The merger came as River Valley’s pastor, Brandon Braun, has been undergoing treatment for leukemia.

“Our No. 1 objective, along with the leadership of River Valley, was we have to ensure that we take care of Brandon and his family,” Southeast executive pastor Tim Hester told WDRB.

St. Louis Christian College’s new Called to Serve podcast explores the stories of leaders who have made a difference by answering God’s call to serve. The podcast is hosted by Kent Sanders, professor of communication arts at SLCC. New episodes release every other Friday. Learn more at https://stlchristian.edu.

﻿Pathway Church in Wichita has gotten national attention for helping to pay off millions of dollars in medical debt for Kansans who were nearing bankruptcy.

As Christian Standard reported in April, Pathway Church worked with the nonprofit RIP Medical Debt to leverage $22,000 in donations to pay off $2.2 million in medical bills for state residents. USA Today now has covered Pathway’s story in an article about RIP Medical Debt and its work arranging medical debt pay-offs for churches.

Eighteen congregations from Maryland, Illinois, Virginia, Texas, and elsewhere have taken advantage of the organization’s services during the past 18 months, eliminating $34.4 million in medical debt.

“Being able to do this provides an opportunity to illustrate what it means to have a debt paid that they could never pay themselves,” Pathway executive pastor Larry Wren said in the USA Today article. “It just was a great fit.”

Milligan College in Tennessee received a visit last week from Tennessee Gov. Bill Lee. The governor spoke at the Carter County Republican Party’s annual Lincoln Day Dinner, which was held at Milligan’s Sutton Hall. The governor gave a report about the first 100 days of his tenure and advocated his plan to enhance the economy in some of the state’s rural counties.

Casas por Cristo organizes trips for church mission teams to build homes in Juarez and Acuna, Mexico. The organization also does work in Guatemala, Nicaragua, and the Dominican Republic.

The story by KTSM noted that the church workers from the United States were building a home in Anapra, a slum neighborhood in Juarez—and also the site of a section of private border fencing that has been constructed on the U.S.-Mexico border.

“The group told KTSM’s reporter in Juarez they were surprised to see the privately funded border wall being built just as they are building homes,” the station reported.

Casas senior designer Andrew Sexton told the station, “We want to build walls, but not the walls that most Americans are talking about or want to build. These walls are for this house and this family.”

A 12-year-old member of Chilhowie (Va.) Christian Church in Virginia is getting a lot of prayers from her community after being hit by a car. A prayer service was held on Saturday in a local park for Kiara “Kiki” Tirado. She was on life support after being struck by a car on Memorial Day while riding her bicycle, SWVA Today reported.