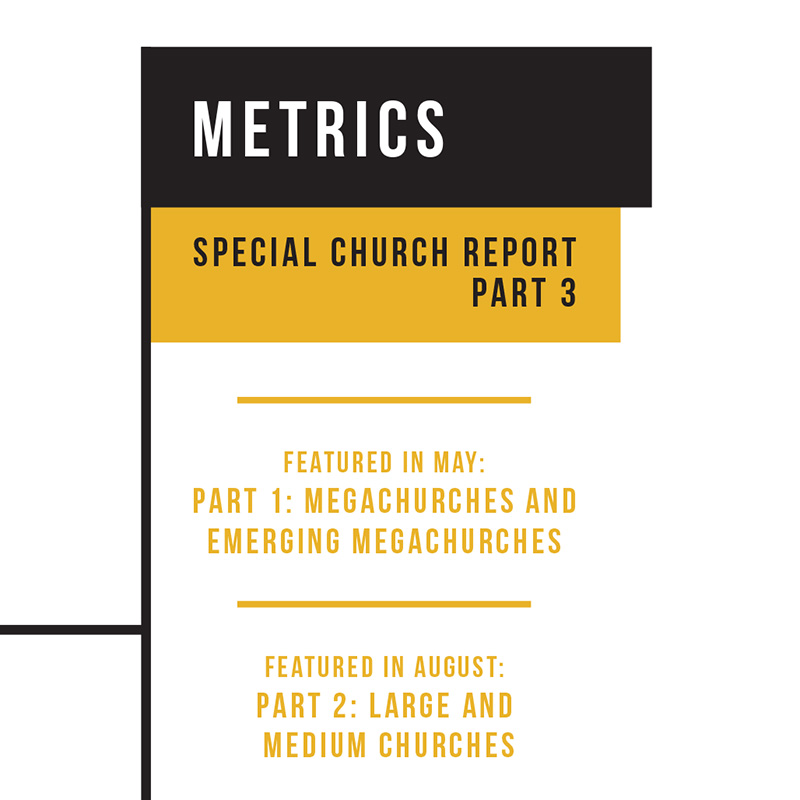 This is the final installment of a three-part series sharing the research findings from our annual church survey. The May issue focused on 2018 data from megachurches and emerging megachurches. The August issue covered large and medium churches, and now we conclude the series with statistics from 78 small churches and 47 very small churches.

This was the second year of surveying small and very small churches, so I will include some year-to-year comparisons, while acknowledging more data is necessary before identifying trends.

Small and very small churches had the slowest growth rates of any of the church size categories. The small churches grew only an average of 0.03 percent last year, making it the slowest-growing category two years in a row.

Small and very small churches were the only church size categories that saw less than half their churches grow (38 percent and 43 percent, respectively). By comparison, 74 percent of megachurches and 71 percent of emerging megachurches we surveyed grew in 2018.

The ministers of small and very small churches surveyed were the least likely to be hired from within the church (16 percent and 4 percent, respectively).

Several small and very small churches noted they were developing or engaged in some creative ministry outreach efforts to reach their communities. Good examples include Vernal (Utah) Christian Church, which is reaching into their local Mormon community; One Life Church (Concord, North Carolina), which is starting a nonprofit, co-work space called the Collective; and First Christian Church (Mableton, Georgia), which is working to establish an immigrant ministry. Other examples include New Hope Christian Church (Belton, Missouri), which is serving homeless families, and the Church of Christ at Logansport (Indiana), which has weekly worship services for both Hispanic and Burmese families from their area.

The survey asked churches to identify one hope, one fear, and one priority for this year. Reviewing the open-ended responses revealed several notable themes. Here are the major hopes, fears, and priorities of the small and very small churches surveyed.

A handful of small and very small church ministers in the last six months have told me they’ve conducted more funerals for members than baptisms of new believers for the last few years.

This is a troubling trend that could result in churches closing their doors over the next decade. It’s going to take some major changes—new ministry strategies and programs, facility enhancements, increased generosity, and Internet and social media upgrades and initiatives—for most of these struggling churches to start shifting the tide from death and decline to new life and growth.

No church can keep things unchanged for 40-plus years and expect to reach and retain young adults and families. We can’t forget the biblical principle that “new wine” requires “new wineskins” (Matthew 9:17).