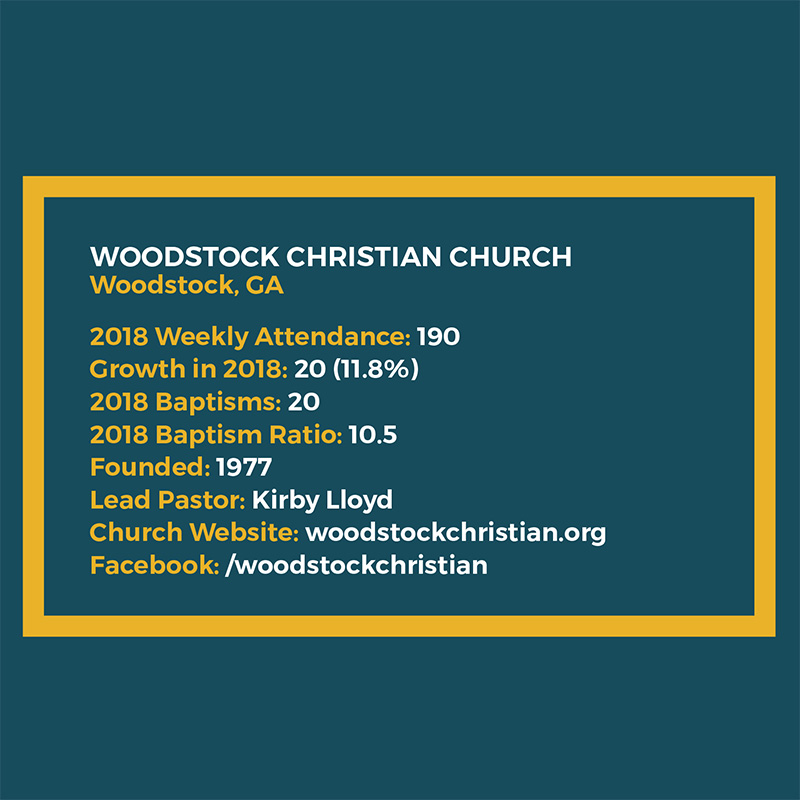 When Kirby Lloyd accepted the call to serve as senior minister at Woodstock (Georgia) Christian Church in 2017, he didn’t intend to make sweeping changes. In fact, Lloyd didn’t even displace the minister who preceded him. Instead, Lynn Eynon, who had served as Woodstock’s senior minister for more than three decades, remained on staff as the minister of pastoral care.

Instead of launching a variety of new ministries upon arriving, Lloyd encouraged Woodstock Christian to do a better job of promoting what it was already doing. Like many smaller Southern churches, Woodstock offers a food pantry, a clothing closet, and a soup kitchen (which it calls Yahweh’s Table). But while most churches in the area offer those services just once a month, Woodstock offers them twice each week. At Lloyd’s urging, the congregation began advertising its community ministries more aggressively—through pamphlets, social media, and even the sign in front of the church building.

As demand for those ministries grew, so did the number of weekly volunteers. Lloyd quickly noticed this pattern: People would volunteer in the church’s community outreach programs, then attend a worship service on Sunday morning, and eventually join the church. To Lloyd, the reason is clear: “If you feel like you are part of something, you’re more likely to stay.”

For the past year, most of the growth at Woodstock Christian Church has come through those community outreach ministries. In 2018, the congregation grew by more than 11 percent, despite initially dropping in attendance immediately following the transition of senior ministers. Now the church is celebrating new baptisms almost every week, Lloyd reported.

The growth has led to another unplanned and unintended change—a building campaign. Last year, Woodstock Christian began a $900,000 renovation of its 14-acre property, joining the two existing buildings together, remodeling the kitchen, increasing sanctuary seating, and updating the children’s ministry areas. Though the building project was not part of his plan, Lloyd said it was important for the church’s ongoing ministry. “This church, small as it is, does more than a lot of larger churches.”

Woodstock is now running two worship services on Sundays: one modern and one traditional, with Bible study in between. Thanks to the construction project, all of the community ministries now happen in one place. The renovated building is now in use every day as the church reaches an ethnically and socioeconomically diverse group of people.

Kirby Lloyd didn’t plan most of what has happened at Woodstock Christian Church since his arrival, but he did intend to lead a congregation that loves the Lord and loves its neighbors. In that respect, everything has gone according to plan.

“This is truly one of the most loving congregations I’ve ever seen,” Lloyd said. “We welcome everybody.