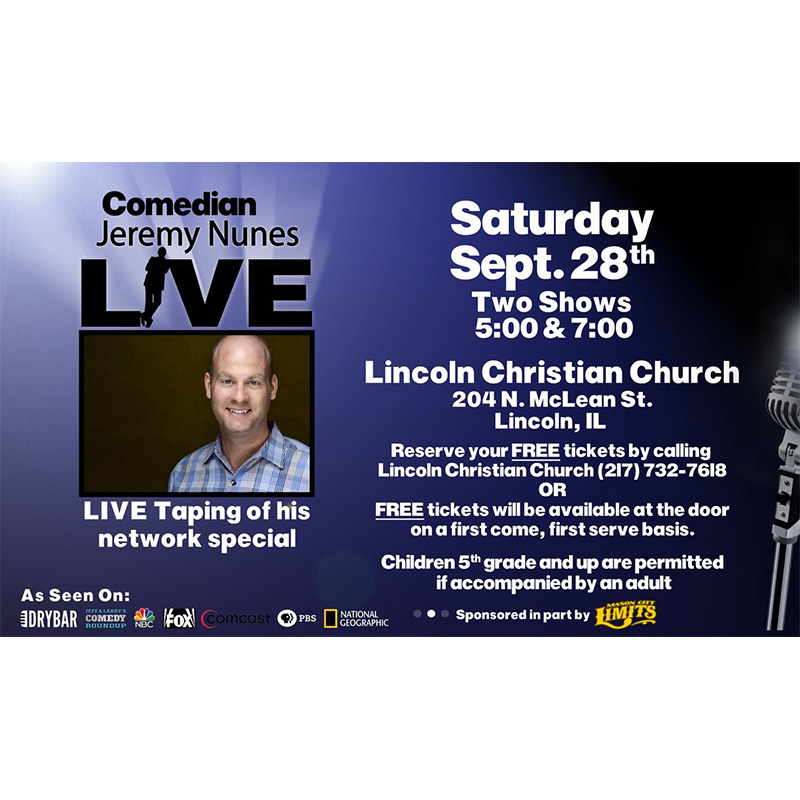 Jeremy Nunes, known for his “front porch” brand of stand-up comedy—humor that’s “clean enough that you don’t have to take it to the back porch”—will perform free shows at 5 and 7 p.m. this Saturday, Sept. 28, at Lincoln (Ill.) Christian Church. The shows will be filmed and then shopped to three TV networks that have expressed interest.

“My first special, 17 years into comedy!” says Nunes, who has appeared on NBC, Fox, PBS, and Comcast, among other networks. He explains that Funny & Amen Productions will produce and film the show and create a master file.

“When you’re not famous, you film the special first, then attempt to sell it to the networks after,” says Nunes, a Christian comedian notable for being six feet six and having performed with Second City in Chicago. “It’s often a gamble, but I feel it’ll pay off.”

Nunes will be in friendly territory. He lives in Riverton, Ill., about a half-hour’s drive from Lincoln. Riverton is located just west of Dawson, Ill., a village of about 500 where Nunes served as mayor.

“I did not seek re-election when my term expired in May 2017, because I wanted to focus on my faith, family, and comedy,” Nunes says. “I felt being mayor was having a negative impact on all three.”

Nunes performed at Lincoln Christian Church about this time last year in a show that benefited the church’s “Harvest of Talents” (more on that ministry below). Nunes was part of a bill that featured comedian Bob Smiley. Last year’s show was arranged by LCC’s men’s group, Men on Fire, which is doing much of the “heavy lifting” again this year, says LCC office administrator Chase Dilworth.

Nunes’s comedy set last year was well-received, Dilworth says. Nunes thought so, as well. The comedian narrowed down the list of possible venues for his special to 10 churches where he had performed, then he and Kevin Hackenberg, his producer, evaluated the churches to determine the five sites best suited for filming.

“I reached out to those 5, and they were all willing, but the folks at Lincoln seemed 100 percent ‘all-in,’” Nunes says. “In comedy, just like marriage, you’ve got to have two sides willing to work extra hard to make things work. At least, that’s what my wife reminds me when I’m napping on the couch! . . . Knowing that they would go above and beyond, we zoned in on Lincoln.”

Nunes says giving away the tickets should help guarantee a packed house and a happy house. “If I sold tickets, I’m sure we would’ve had a crowd, but fans can’t reject free!”

THIS YEAR’S HARVEST OF TALENTS IS OCT. 26
Last year, Jeremy Nunes’s performance helped raise money for Lincoln Christian Church’s “Harvest of Talents for World Hunger,” a unique ministry that, since 1984, has called on people to use their God-given talents to raise funds to fight spiritual and physical hunger in Jesus’ name. In 2018, through Harvest of Talents, the church raised $100,717 for International Disaster Emergency Service, an Indiana-based relief organization that benefits from the church’s annual efforts. This year’s event—focusing on food, crafts, music, and fellowship—will be Oct. 26. Learn more at www.HarvestofTalents.org.