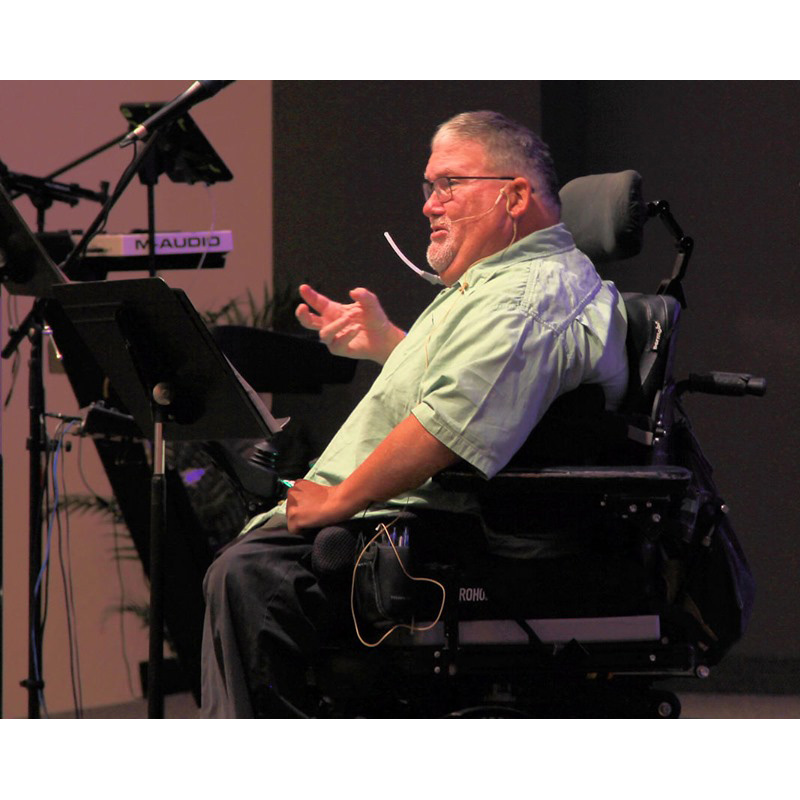 As Cincinnati Christian University finishes its final semester of classes before closing, there are undoubtedly many stories from the school’s alumni about their time on campus. This remembrance, which originated as a Facebook note, particularly stood out to us. Jerry Borton was born with cerebral palsy and now serves with Luke 14 Exchange, an organization that encourages people with disabilities to use their gifts. His story is just one part of the tremendous legacy CCU has left us.

Like so many of you, I am deeply saddened by the news that Cincinnati Christian University is closing. Also like you, I’ve wondered how the school got to this point. Rather than second-guess the decision, I am choosing to tell a part of my story.

Sometime during high school, I decided to go into ministry. High school was a time when I really grew in my relationship with the Lord. As a person with a disability, I understood it would be difficult to work and then be able to volunteer in ministry. Now at age 60 looking back, I marvel that that kid was able to figure that out.

The summer before I was to start at CBS in 1978, I had begun to receive Vocational Rehabilitation services. (VR is the government agency that helps people with disabilities find and keep employment.) When I told them I wanted to go into ministry and attend school at Cincinnati Bible Seminary, they sent one of their counselors to look at the campus. About a month before starting school they told me that the campus was completely inaccessible, and VR wouldn’t pay for me to attend. It would be impossible to work out the details. Instead, VR offered to pay for me to attend a community college part-time.

The other glitch was the fact that I used a manual wheelchair and could not navigate steps. I also relied on the assistance of my family with all my personal care needs. My family would be five hours away. How would I handle this? I had no idea. But every preacher I knew graduated from Cincinnati Bible Seminary and I wanted to as well.

Earlier in the year, I attended a campus visitation with my youth group sponsors. The dean said the school would love to have me as a student, but I don’t believe he thought I would ever show up. When the Vocational Rehab counselor spoke with this same dean, both agreed this was not the right school for me.

Looking back, they were the experts and they were right . . . except for God.

To emphasize this point, the minister from my little home church, who was also a CBS alumnus, made a campus visit. He spoke with someone in the administration and helped them understand that if God wanted me to go to Bible college there, they needed to make a way. I was not told about this conversation until well into my years at school.

Within two weeks of school starting, I somehow convinced my VR counselor that I could make it work, though I had no idea how. They agreed that if I could recruit five people to assist with my care, they would pay for school. I am not sure how I persuaded them. It probably was not me at all, but God.

At this same time, a girl from my youth group arrived on campus for orientation. I didn’t attend orientation because no care help for me had been recruited. She told one of the professors about me and my need for assistance. During one of the freshmen orientation sessions this professor got up and essentially said, “There is a young man in a wheelchair who wants to go to school here. He needs to recruit five men to assist with his care. It would be a shame if we were not able to help him come.”

Today, this could never happen. There would be privacy laws, insurance and liability concerns, issues involving paying for the assistance, and all kinds of other red tape. It is truly a God thing I was able to go to school when I did.

I literally sat by my phone, knowing a call would come. And it did. Because of the professor’s plea, five fellow freshmen went to my friend and said they would help. She called me, and my family helped me pack and drove me to campus. Mom and Dad had never seen the campus prior to that trip. They wondered if they should leave me there. But they did. I arrived on day two of classes. Freshman orientation was worth one credit. I had to make up that credit elsewhere. When I started school, I was already behind!

My youth group friend never finished school, and I wonder if God had her there for such a time as this.

Only two of those five guys helped and stayed with me, but I am still thankful for all of them. Without them, I may never have gone to Bible college or still be serving in ministry. Over the years at CBS a core group of guys helped with my personal care. Scores of students helped by pushing me around campus, carrying me up and down steps to classes, carrying food trays, typing papers, etc. In case you weren’t around the campus then, the men’s dorm was at the bottom of the hill and everything else was at the top of the hill. Vocational Rehab was right, the campus was totally inaccessible. There were no ramps, no power doors, or any accessibility. But remember. . .  except for God.

The first three weeks on campus, I struggled with whether I could continue. Up to that point it was the hardest thing I had ever tried to do.

About three or four weeks into my freshmen year, the resident assistant on my floor came into my room. He asked how I was doing. Then he said, “I heard you are thinking of leaving. We want you to stay.” It was almost like a switch went on in my head. I realized I could stay. This too was a God thing.

Fast-forward five years. I graduated in 1983 and started a disability ministry. Starting a ministry from nothing is difficult. It is even more difficult from a wheelchair . . . except for God.

I often returned to campus to speak in classes about disability and to recruit interns for the ministry. There were several times during the early years of my ministry, and even more recently, that I looked for ways to get back on campus. There I could remember what God had done.

I thought about putting names in to recognize those who helped, but I am afraid I would miss someone. Besides, with some of the goofy things that happened between all of us over the years, you (the current leaders of the brotherhood) may not want to be known as the one who left me in the shower for three hours, pushed my wheelchair up the hill with your truck, or carried me up a flight of stairs just to get the reactions of others when they found me sitting alone on the landing. And yes, some of these were my idea—but you all had plenty of your own too!

To each of you who had some part in assisting me during my time at Cincinnati, thank you. Those two words don’t seem to be enough to express how grateful I am to you and God. I am in awe of how many of you are embracing people with disabilities in your congregations because of your experiences with me on campus.

To the current students and faculty, I don’t know how this chapter fits into God’s story for you, but I know it does. Always remember . . . except for God. He writes the final chapter.

I have shared bits and pieces of this story before, but maybe not the whole story. Now seems to be a good time. The place where I learned God can and does do the impossible is closing. I can’t put that together in my head. I can’t see what God is doing. But I am certain there is an “Except for God” moment coming.