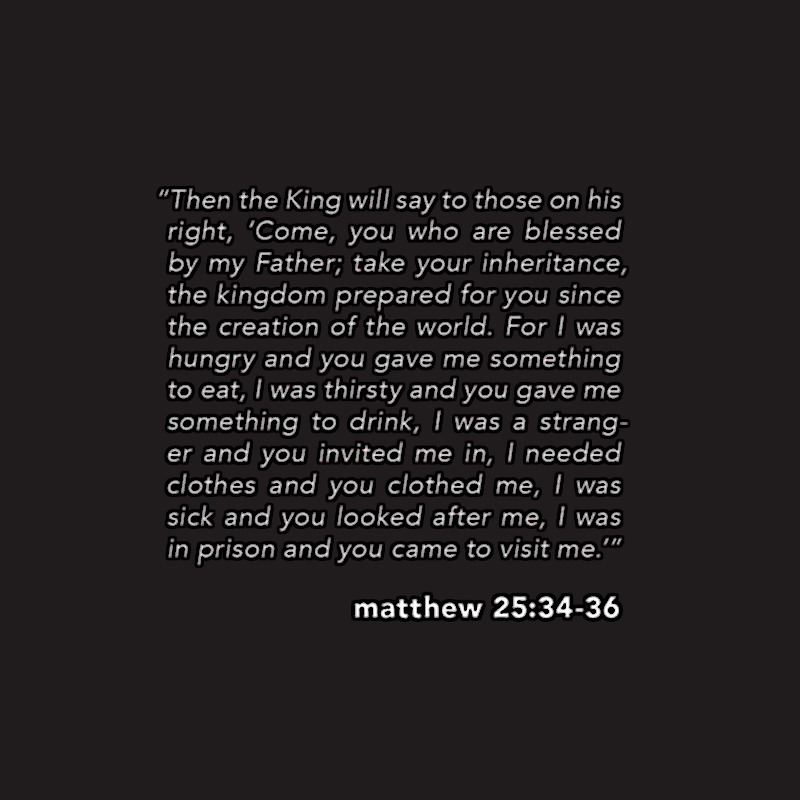 “The impious Galilaeans support not only their own poor but ours as well.”
Julian, Letters, 22

The scene is dramatic. The language is poetic. The effect is chilling.

The Son of Man sits on the divine throne, surrounded by angels. Before him are the peoples of the world. He sorts them like a shepherd separating the more valuable sheep from the less valuable goats. But they are sorted for blessing and punishment, for a reason none quite expects. “Truly I tell you, whatever you did [or ‘did not do’] for one of the least of these brothers and sisters of mine, you did [or ‘did not do’] for me”(Matthew 25:40, 45).

Matthew 25:31-46 depicts a singular criterion of eternal judgment: treatment of “the least of these.” Naturally, Christians are keen to identify who Jesus is talking about and determine how to apply the passage today. Recent publications on this text connect it to all kinds of contemporary social problems: hunger, global migration, torture, sexual assault, the U.S. presidency, Christian support for Israel, the rights of Palestinians. If it is in the news, Christians have applied this passage to it. And they have drawn conclusions about the identity of “the least of these”: narrowly as Christians, more narrowly as Christian missionaries or Jewish Christians, or more broadly as anyone in need.

Question-begging and conclusion-jumping are rampant when it comes to this text. But too much is at stake for such carelessness. We need a thorough look at this text, its context, and its role in the book of Matthew before we set our agenda.

The Features of Storytelling

The artistry of this text is exceptional. The description is spare but deeply meaningful. Jesus refers to himself as “Son of Man,” his characteristic term for himself that alludes to the triumphant figure who defeats the evil kingdoms in Daniel 7. Enthroned as king, he acts as shepherd, an image repeatedly used in Israel’s Scriptures for their kings (Matthew 25:31, 32).

He announces that the group on his right, the side of kingly favor, are blessed by his Father and will inherit the kingdom prepared before the creation of the world (v. 34). He enumerates the reasons for their blessing in pairs: feeding and giving drink, sheltering and clothing, caring when sick and visiting in prison. These were acts of mercy viewed by Jesus’ contemporaries as the duty of God’s people, but they signal heightened hardship as the list ends with imprisonment. The Lord is the object of persecution, the victim of the prevailing, wicked empire.

Those who are blessed are utterly unaware of what they have done. Incredulous, they ask for an explanation. They had no idea they had served the Lord.

The Lord answers their incredulity by asserting his solidarity with “the least of these brothers and sisters of mine.”

Then the scene reverses to those who have not served the Lord. The cursed hear the Lord’s pronouncement in the same way as the blessed, with only a few words omitted to shorten the story. They also are ignorant and incredulous. In contrast to the kingdom prepared before creation, they go to the eternal fire prepared for the devil and his angels (v. 41).

Both groups call the king their “Lord” while expressing the same ignorance of their deeds (vv. 37, 44). Their destiny hinges not on their words when their Lord is visible but their actions when the Lord is invisible yet present.

The Function in Context

This story comes as the conclusion to a long discourse that began in Matthew 23:1, the fifth long discourse in Matthew’s Gospel (Matthew 5:17:27; 10:1-42; 13:1-52; 18:1-35). In this last discourse, exchanges with the religious leaders lead to Jesus’ denunciation of them for not practicing what they teach (23:3), especially for neglecting justice, mercy, and faith (23:23). Their determination to hold their power leads them to reject Jesus, bringing to a climax the persecution of God’s prophets throughout Israel’s Scriptures (23:29-36). That rejection will be answered by Jerusalem’s destruction (23:37-39), of which Jesus warns his followers (24:1, 2), cautioning them to be ready to endure hardship and persecution (24:3-13), yet assuring them that God’s good news will still be heralded throughout the world (24:14).

These events must not be confused with the fullness of Jesus’ reign as king, however. That comes at a time unknown even to the Lord himself (24:36). His followers must therefore serve faithfully and patiently during what seems to be Jesus’ absence, like servants while their master is away (24:45-51; 25:14-30). They must be prepared to endure, even if his arrival takes longer than they hope (25:1-13).

At the conclusion of this discourse, the story of the sheep and goats refocuses the Lord’s seeming absence. Though invisible to all on earth, he nevertheless reigns over earth, knowing what all on earth do. And though invisible on earth, he is served on earth whenever one serves one of “the least,” those who hunger, thirst, are naked or strangers, are sick or imprisoned.

How does the Lord rule when he appears to be absent? How can God’s good news be proclaimed to all the nations when the world is in turmoil and Christ’s followers are persecuted? In part, the answer is in the simple, lowly service of his followers toward those who are in need . . . service that serves the Lord who himself became lowly and needy.

The Fabric of the Gospel

This passage connects themes in the entire Gospel of Matthew. We often read this text narrowly for its teaching on the terms of final judgment. But that judgment must be understood in relation to Matthew’s larger emphasis: the coming of the reign of God, “the kingdom of heaven” in Matthew’s terminology, through the ministry, death, and resurrection of Jesus. Matthew says God’s purpose will be accomplished, God’s promises will be fulfilled, God’s righteousness will prevail, God’s will shall be done on earth as it is in Heaven, all through Jesus serving, dying, rising, ruling, and sending his followers to make disciples who do what he commands until he returns.

This ending of the last of Jesus’ five long discourses in Matthew’s Gospel corresponds with the other discourses, especially the first, the Sermon on the Mount. Those who are blessed under God’s coming reign are needy, downtrodden, unable to assert their own power (Matthew 5:3-6). As the objects of God’s purifying, peace-making mercy, they are animated by the same qualities (5:7-9), joyously confident of his reign even when they are persecuted as subjects of the true king (5:10-12), transforming the world by their faithfulness to their king (5:13-16).

Those connections continue through the Sermon on the Mount. God has loved those who become subjects of his kingdom despite their rebellion against him. So as God’s true children, they love even their enemies (5:43-48). That love replaces vengeance with self-sacrifice (5:38-42). Their love, like God’s, is not limited to any category of people.

All these exhortations are grounded in the character and actions of the king who gives them. When asked by two disciples to be enthroned at his right and left, Jesus concludes his response by calling on all to become great in the kingdom by becoming the servant of all: “Just as the Son of Man did not come to be served, but to serve, and to give his life as a ransom for many” (Matthew 20:28).

The Fellowship of the Least

It takes question-begging and conclusion-jumping to derive simplistic answers from this text about everything from how to vote to whether to give to beggars on the street. But in this story, we realize the breathtaking scope of ministry to the least of these. The Lord who gave his life for the unworthy, even for those who tortured him to death, calls his followers to love even their enemies, not in word only but in the most generous of deeds.

It therefore appears implausible that as “the least of these,” Jesus spoke only of Christians or Christian missionaries, even with his statement addressing the reception of Jesus’ messengers (Matthew 10:40-42). We limit our circle of ministry at our peril when Jesus calls us to love even those who persecute us. Even if we especially serve the family of believers, we must do good to all people (Galatians 6:10).

Does this mean we are called to serve the needy more than to declare God’s good news? Not at all. This scene of judgment in which “all the nations” are gathered parallels the commission to “make disciples of all the nations” (Matthew 28:19, New American Standard Bible). Those who preach to all the nations serve all the nations, doing all the Lord commands while teaching others the same. We can confidently reject the false choice between evangelism and benevolence. They are inseparable.

Is the church responsible to feed the whole world? Do we need a strategy to end global poverty? Our resources, after all, are finite. Our sense of inadequacy to respond to the needy multitudes also arises as we contemplate discipling “all the nations.” Like Jesus’ call that our righteousness must exceed that of the Pharisees and teachers of the law (Matthew 5:20), the scope of this mandate should leave us deeply aware of our weakness.

Recognizing our inadequacy, we go again to the cross as those poor in spirit, who hunger and thirst for God’s right way, depending on God’s mercy and power, realizing the tiny mustard seed grows to be a great tree in which the birds build their nests . . . not by our wise strategy or exceptional generosity but by the Lord’s power. Those commended in Jesus’ story were not brilliant planners or martyr-like givers. They simply did what the Lord’s mercy prompted as the need appeared, unaware of the immense significance of what they did. The Lord is with them always, even when they are unaware (Matthew 1:23; 28:20).