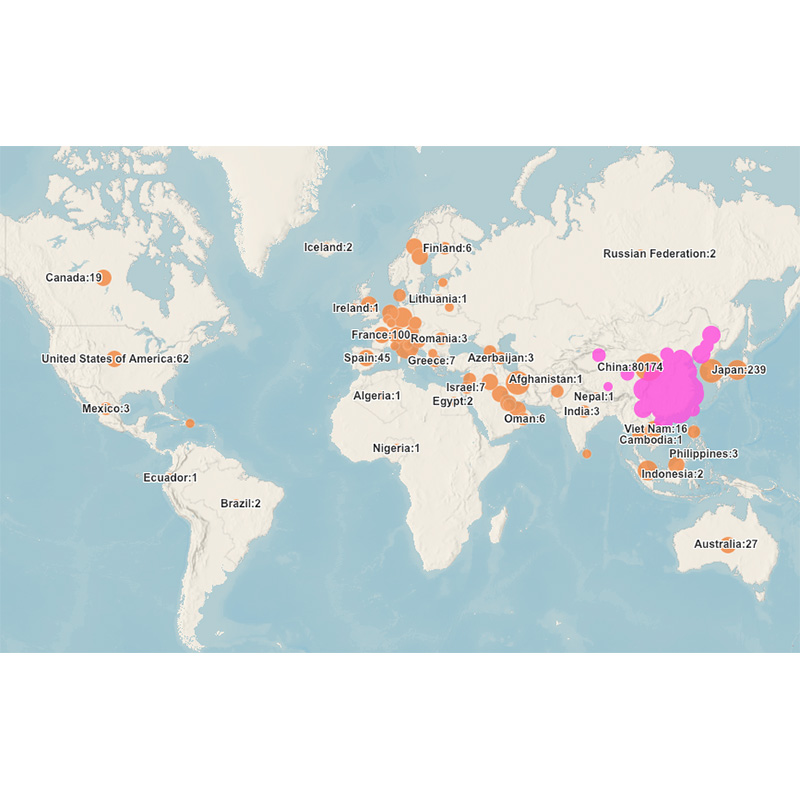 The coronavirus outbreak has shaken things up for mission organizations and other Restoration Movement groups that do work internationally.

The China Institute at Lincoln (Ill.) Christian University—which assists the 20 Chinese students and their families who live on campus—had a student arrive at Lincoln in January after the outbreak of coronavirus, also known as COVID-19.

The student came from Wuhan, China, which is the epicenter of the outbreak, said Weilun Lee, director of LCU’s China Institute. The student was checked out by local health officials and given the all clear.

“We have done all the things we need to do. Everything is fine,” Lee said.

Of course, life for the China Institute has been made difficult following the outbreak.

More than 88,000 people had been infected with the virus in over 60 countries as of early Monday morning. More than 3,000 people had died—the vast majority of those in China.

Lee said he makes regular trips to China to recruit students and meet with friends of the university. He had to cancel his most recent trip because of the outbreak.

“I cannot go right now,” he said. “It definitely has affected our mission here.”

So far, none of the immediate family members of LCU’s students who still are in China have been infected, although some have been under quarantine because of the outbreak.

Thoughts now are turning to the future and what may happen if it is unsafe or unwise for students to return to China for the summer. The Chinese students can stay on the LCU campus over the summer, Lee said, and some may take summer classes instead of returning home.

A DAILY WATCH
Meanwhile, mission groups have their own hurdles to clear.

Doug Lucas, president of Team Expansion, which has missionaries spanning the globe, said his organization has responded to the COVID-19 outbreak by instituting what he called a “daily watch.”

The organization has workers who are compiling the latest reports and statistics each day about the new coronavirus from national and international health authorities, such as the World Health Organization and the U.S. Centers for Disease Control and Prevention.

Lucas said he reads “every single word” of the report each day.

“We would be remiss if we didn’t have some kind of pause because we do care deeply about our workers worldwide,” he said.

None of Team Expansion’s workers have tested positive for COVID-19, Lucas said. But that doesn’t mean they’ve not been affected by the international spread of the virus.

“It has given them pause, and it has sometimes even inhibited their daily work and lives,” Lucas said. But, he added, “They are very resilient. I’ve just got to say they are courageous people.”

At the same time, Lucas doesn’t allow the threat of disease to take Team Expansion’s eyes off its mission. He noted that of the almost 90,000 people worldwide who had been infected with COVID-19, the vast majority will recover from the illness. The virus has a roughly 2 percent mortality rate.

Lucas said the work to reach those people groups must continue.

“Jesus is worth the risks that we all take,” he said.

CONTINUOUS MONITORING
Kip Lines, executive director of CMF International, said his global mission organization always has stayed very aware of the health and security risks in the regions where its workers are deployed. The advent of the new coronavirus hasn’t changed anything.

“We’re just continuing to monitor that,” he said.

Lines said most places where CMF’s workers are living have not been impacted by the virus, but some places in Southeast Asia have been affected. Lines said a couple of missionaries were tested for COVID-19 because of symptoms they were experiencing. Those tests came back negative.

As of now, Lines said, CMF has placed no restrictions on travel, and the organization is working to reassure its partners that the health dangers remain manageable.

CMF works with a lot of churches that do short-term mission trips, and it sees no need at this point to cancel those trips because of COVID-19. CMF also is reassuring its summer interns and their families—the group sends 30 to 50 college-age interns abroad each summer—that the dangers remain low.

“It’s not much worse than regular flu symptoms,” Lines said. “It’s not a reason at this point to cancel travel plans.”

And Lines echoed Lucas of Team Expansion that the call to ministry outweighs many dangers.

“There’s always some risk involved in what we do,” he said. “We believe that the call to share the good news of Jesus and bring about the kind of work and transformation God is doing around the world requires us to take risks sometimes.”

But it is wise to be vigilant, he said.

(Image: A map showing the spread of coronavirus accessed at the World Health Organization website.)