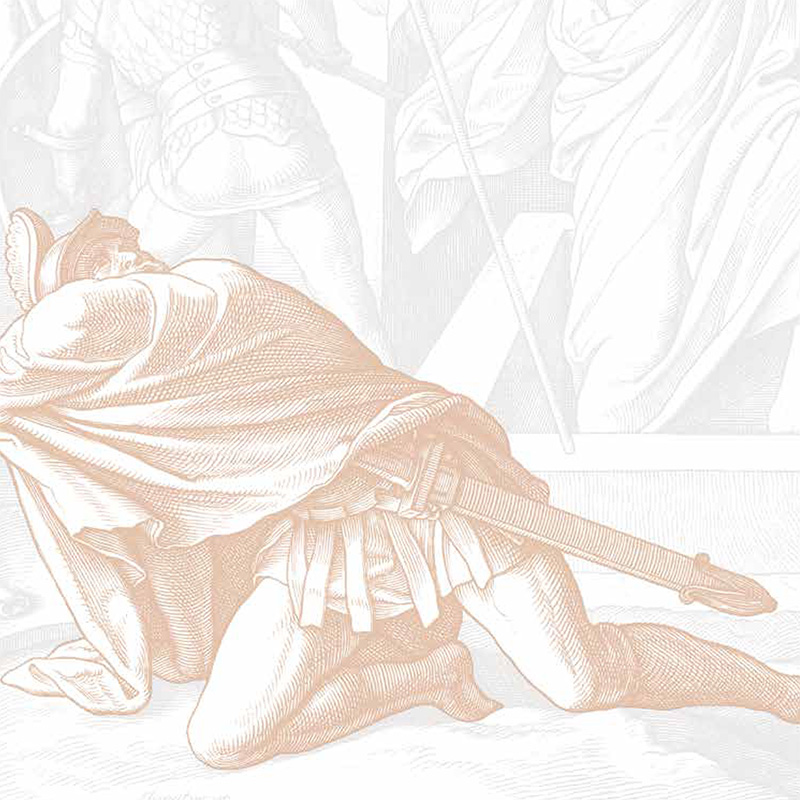 “What am I supposed to do with this money?” the soldier asked as he jiggled a bag of coins on the table. “It feels . . . tainted.”

“Just enjoy it, man,” offered the second soldier. “How often does an opportunity like this come along for us? All we have to do is tell a little lie. No big deal.”

But it felt like a big deal. A weight hung in the air as a strong wind pushed through the partially covered window of the dimly lit room. Two Roman soldiers sat counting their hush money. It was a bribe, through and through. More than that, it was a cover-up.*

The two soldiers had served together for years. When you’ve been through the kinds of things they had, it bonds you. Still, they couldn’t have been more different. Soldier one was an idealist. He enlisted because he believed in the cause. He believed in Rome. His father had been a soldier. And his father’s father, and his great-grandfather before that. He had longed to serve the mighty Roman Empire for as far back as he could remember.

Soldier two, on the other hand, viewed his service more as a paycheck. He had heard of some of the perks that came with the job and jumped on it. The pay wasn’t great, but the empire provided in other ways. Portions of food were regularly dispensed to soldiers . . . and pillaging certainly had its advantages.

The second soldier counted his new fortune over and over again, challenging himself to see how high he could stack his denarii until the tower toppled over. This was easy money. The easiest money he’d ever made.

“It’s all there. Every denarius they promised us,” he said. “I think I’m going to surprise the wife with something real special.”

Soldier one struggled to be so nonchalant. It had been only a few days since the incident happened. He hadn’t slept since, unsure of what he had felt and seen that fateful night and unsettled by what had happened since.

They had been appointed to a peculiar assignment, guarding the tomb of a man named Jesus. Some were calling this Jesus the Son of God, while others—namely the Jewish leaders—opposed him and called for his execution. The soldiers had never seen so much fanfare over a crucified man, and they’d certainly never had to stand guard at a tomb before.

They weren’t the only soldiers given the task. There were dozens; each group had taken shifts in order to remain sharp. The job was simple. Don’t let anything happen to the dead man’s body. It had sounded easy enough, but a lot was on the line. Their lives were on the line. If anything happened to the body, it meant almost certain death for the soldiers.

“What, you mean the shaking? You mean the being—whatever it was—opening up that tomb? Yeah, I felt it. I saw it. But those are the least of my worries.”

The two men had just rotated onto their shift. They’d worked together for years and figured this was as easy an assignment as they’d had in a while. They’d even joked about it with the other guards there with them.

And then it happened.

An earthquake erupted beneath their feet as something, some being, rolled back the stone covering the entrance to the tomb. It was pure and white, so much so that the guards snapped their heads away and covered their eyes from its presence. They fell to the ground in fear only to awake some time later, unaware of how much time had actually passed. When they did, Jesus’ body was gone.

The wind once again whipped through the window as the men tried to recall the groggy details after the incident by that garden tomb, remembering the new fear that had gripped them, a fear rooted in their failure and the punishment that was surely to come.

“The least of your worries?” questioned the first guard. “I don’t know, this feels . . . it feels crazy. I know what I saw, and whatever that was, I don’t want to upset it.”

“But we knew what was at stake when we took the gig,” replied the second man. “We knew if something happened to that body our necks would be on the line. So the way I see it, that high priest promising to protect us was our only way out . . . and all it required was a little lie? It was a no-brainer. Not to mention, we got a little, actually, a lot of coin for doin’ it!”

“Yeah, but what if that dead man really was who he said he was . . . and we’re helping to cover that up? That doesn’t terrify you?”

“Listen, I’ve got a family. I want to see my kid grow up. I don’t know that we’ve got any other choice. If we can convince people that it was the guy’s followers who stole his body, we should be OK. Don’t be so noble, man.”

It sounded so simple. And what were the alternatives?

After the guards had come to, they weren’t sure where to go or whom to tell. Telling the Roman officials had seemed like a certain death sentence, so they had opted to tell the chief priests. It had just seemed like a better alternative.

The soldiers told the priests everything they’d seen. They told them about the earthquake and the being, how it had moved the massive stone aside without assistance, and how it had sat upon the stone. They confessed they had never been so afraid and they’d passed out.

The chief priests met with the elders for a short time and returned with a plan. Each soldier was given a large sum of money and told to tell an altogether different story. “Tell them, ‘His disciples came during the night and stole him away while we were asleep.'” And then they reassured the guards, “If this report gets to the governor, we will satisfy him and keep you out of trouble.”

How could they pass that up?

The first soldier tried to loosen up. He poured out his denarii and began counting it.

“Do you really think people are going to buy it? That somehow a group of misfits snuck past us—trained Roman guards—in the middle of the night and moved that stone . . . all so quietly they didn’t even awaken us?”

“There’s no way,” he said, answering his own question.

“That’s not our problem,” responded the second soldier. “I’m taking my money and living to see another day, my friend.”

The first soldier finished counting his money as the wind continued to send gusts through the poorly covered window.

“Yep, mine’s all here, too,” said soldier one. “I suppose you’re right. We don’t really have a choice in this. I do wonder, though . . . do you think the truth will ever get out? Do you think anyone will ever really know what happened?”

“Nah,” replied the second soldier, “A story like that? A man coming back from the dead? I think it dies with us.”

*This article, based on biblical events, employs some creative storytelling that includes fictionalized dialogue and description.

Ryan Rasmussen serves as lead pastor at First Christian Church in Canton, Ohio. He also hosts the monthly Jesus for All People podcast.