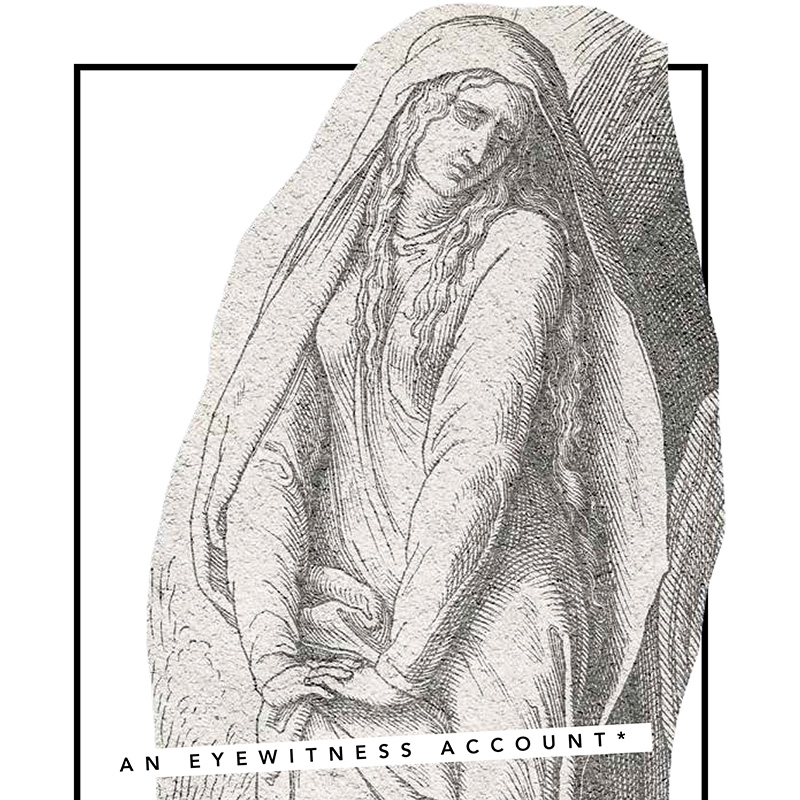 Mary Magdalene had been watching for hours. Now, the jeering crowd was gone and only the women mourning Jesus remained at the cross together. An unfamiliar man approached them; he too had sorrow etched on his face.

“I have permission to take away Jesus’ body, so that it may be laid to rest away from this terrible place.” She noticed he paid no mind to the sweat and blood around them, this man whose fine clothing surely would be soiled by this gruesome task.

He spoke tenderly to Jesus’ mother as he told them a place for burial was being prepared. “No one else has been laid in this tomb. If you come with me, I’ll show you where our Lord will rest.”

A Journey of Death and Darkness

Mary Magdalene went with the women who followed Jesus. How many times had they walked together? Looking ahead to the next town where Jesus would teach, searching small marketplaces for enough food to feed their growing numbers, recounting yesterday’s parables and each trying their hand at unraveling the new truths.

This journey was silent. The earthy fragrance of myrrh was heavy in the air, stinging her eyes. She remembered a faraway night when Jesus’ mother had told them about the lavish gifts of gold, frankincense, and myrrh. Learned men from the East had followed a star to find Jesus. Mary had told the women to close their eyes as she described the finery of each gift’s vessel and the vibrance of each man’s elegant robes.

“But what I treasured in my heart was their reverence, from the first moment they saw him.” The fondness of Jesus’ mother was evident by the smile in her voice. “Wealthy scholars who charted courses across the land to find the King of the Jews. Led by a star! They bowed down to him in worship, my son, still small enough to be held in my arms.” Now Jesus’ body was too great a burden for her to carry.

When the women came to the garden, it was nearly evening. After their day witnessing horrible violence, the tranquil site felt wrong . . . but welcome. Mary Magdalene sat opposite the tomb. She was almost dizzy, but she was unable to look away from Joseph and his helper, Nicodemus, who accompanied him and supplied the myrrh and aloes, as they carefully wrapped the body in linen. The ground seemed to tremor when the immense stone was rolled in front of the tomb. Then the two men left.

Mary Magdalene stood and spoke aloud for the first time in hours. “We cannot stay here.” She looked over at Jesus’ mother, whose head was bent in grief. “It’s time to prepare for the Sabbath. But I’ll return with you, as soon as we’re able.”

She ached all over as they walked from the garden.

Her hands shook as she prepared the spices and perfumes that night alongside Jesus’ mother, but the women finally finished the task.

From Darkness to Light

It was still dark outside when Mary left for the tomb.

Her companions joined her on the way there, each head bent. Sabbath traditions brought a degree of comfort, and they walked toward the new day with firmer steps. But a pall of sadness still covered their faces. As they neared the garden, Mary Magdalene considered their number.

“Who will be able to open the tomb?” None of the disciples were close at hand. There ought to be Roman soldiers guarding the tomb; perhaps the one who had proclaimed Jesus’ majesty just moments after his death would be there and be willing.

When they came upon the tomb, a violent light took hold of Mary’s vision. Brilliant white, brighter than any lamp or star, beamed toward them and everything else was dimmed.

The voice was unlike any she had ever heard, distorted like someone shouting underwater. She felt each word in her bones. “He is not here, he has risen. Go tell his disciples to meet him in Galilee! Remember his words. Just as he had told you, the Son of Man was delivered into the hands of sinners.”

Someone next to her fell flat. Another woman began to shout and sing, but Mary Magdalene could barely hear them over the dissonant ringing in her ears.

Go. That was the command. Go and tell. She pulled her friend to her feet, and they ran from the garden. The path was a blur as the women gained speed, as if they were children racing down a grassy hill.

When they found the disciples, Mary Magdalene’s voice caught in her throat. What had they really seen? The voice she heard at the tomb still was ringing in her ears, clashing with the other women’s retelling. She sat with her head in her hands as the room filled with sound.

Someone asked, “But how could that be? I can’t believe it.” Mary ran out of the room, reeling and suddenly uncertain of what she had witnessed.

She stopped to gather herself, and soon remembered the distraught father who had pleaded with Jesus—”Help my unbelief”—and his daughter was healed. If only she could believe in this miracle, would Rabbi really be back? If only she could act with a bold faith like the woman who suffered for twelve years and was healed in an instant of nearness to Jesus.

A Light Shining in the Darkness

Mary found herself on the path to the garden again. Near the tomb’s entrance, she stood and wept. Her eyes stung with salt, the tears following the same tracks that felt as worn as the path to the tomb.

Then she heard something—voices from inside the tomb that sounded like echoes and whispers all at once. She bent down to peer inside.

“Woman, why are you crying?” asked the strangers.

“Someone has taken my Lord,” she said with ragged breaths. “They have taken him from this place. I don’t . . . I don’t know where I can find him now.”

She turned from the tomb and suddenly saw an unfamiliar figure. He was dressed in simple workman’s clothing and seemed utterly at ease.  She assumed he was the man who tended the garden there.

The man asked her the same question, “Woman, why are you crying?”

“Sir, I beg you.” She took a breath to steady her wavering voice. “If you are the one who has taken my Lord away, tell me. Wherever you have put him, I will go.”

Then he said her name. “Mary.”

She knew his voice. The Teacher. Her teacher, healer, and friend. Mary Magdalene’s watery eyes shone bright as she took in his reassuring smile. The ground beneath them seemed to shout for joy as a great and sudden realization came over Mary. She took her first full breath in days, and laughed. Then she began to step toward him.

“Mary, you must not hold me to this place. I must ascend to the Father.”

Mary stopped after a single step, knowing she must obey her Lord and resist a near-overwhelming urge to go and embrace him.

Every moment recently she had been wishing Jesus would stay near and teach her. And now, after the events of the last few days, his first instruction was that she go away? She laughed again.

She could hardly hold herself steady. Her joy was beyond measure—Jesus was alive!

Jesus grasped her hand, “Mary, instead of staying here, go to my brothers and tell them this: ‘I am ascending to my Father and your Father, to my God and your God.'” His voice was reassuring . . . as always.

Mary Magdalene tread the path from the garden a final time, running to the disciples with her news. She flung their door open and declared: “I have seen the Lord.” And she told them everything Jesus told her.

Now I have told you.

* This article, based on biblical events, employs some creative storytelling that includes fictionalized dialogue and description.

Ely Lozada lives in an Ohio zip code with a Maryland phone number and a New York state of mind. She works as the communications specialist for the YMCA of Greater Cincinnati.