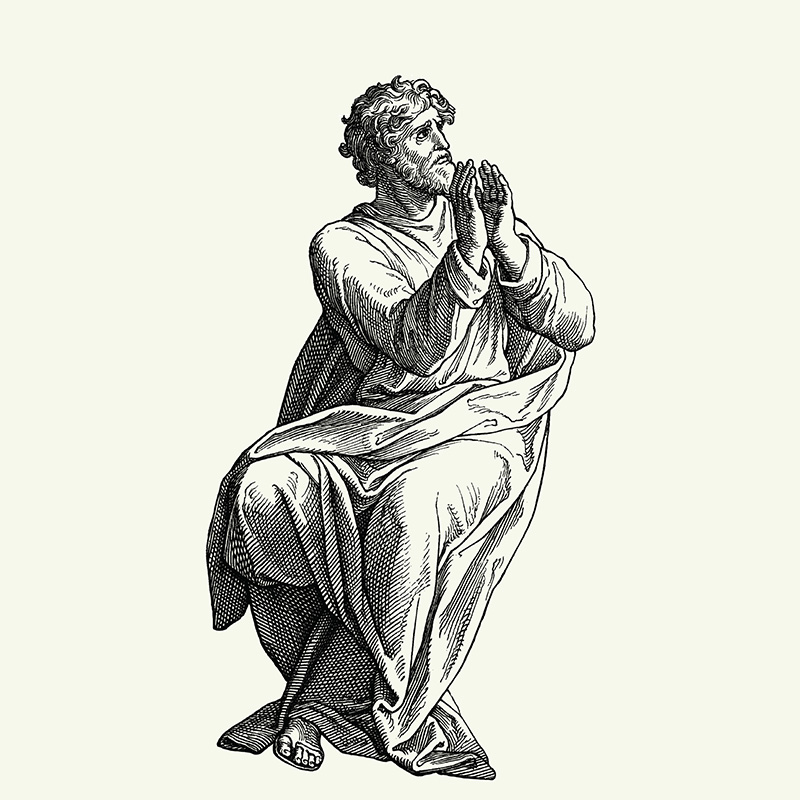 We were just minding our own business, washing and mending our nets on the lakeshore, when we first met Jesus face-to-face. He stepped into my boat to use it as a sort of floating speaker’s platform. After he talked to the people about what he called “the kingdom of Heaven,” he told us to move the boat into deeper water and then cast our nets off the right side. Andrew and I looked at each other and laughed; we had been out there all night without sleep and without fish.

I’m not sure why Andrew and I decided to do what Jesus asked, but there was just something about his tone. As soon as we tossed the net from the right side of our boat, there were so many fish the nets began to break. As we tried to haul in the fish, our boat began to sink, as did the boat of our partners, James and John, when they tried to help. After we finally somehow pulled the boats to shore, I fell on the ground at Jesus’ feat and pleaded with him to go away from me; I felt unworthy, as a sinful man, to be in his presence.

I’ll never forget what he said to me: “Don’t be afraid; from now on you will catch men.”

I looked at James and mouthed, “Catch men?” It made no sense to me, but still we decided to leave our fishing business behind and follow him.

Before Our Very Eyes

Over the next three years, Jesus showed my brother and me, as well as James and John and the other eight men whom he had called, what he meant by “catch men.” I saw him do many incredible things around my hometown, Bethsaida, and Capernaum. I saw him turn plain water into really good wine. I saw him cure people of leprosy. He cured the lame, blind, and those plagued with all kinds of sickness too. He even cast demons out of people! I saw him take a few barley loaves and just two fish and feed thousands of people. I saw him walk on the Sea of Galilee. (Someday I’ll tell you what happened when I tried it!) I saw him calm a raging storm while out on the lake.

He became quite popular among the people, but the Pharisees and teachers of the Law were extremely jealous of him. Jesus began to tell us, his disciples, that he would have to go to Jerusalem and suffer many things at the hands of the rulers and chief priests, that he must be killed but on the third day be raised to life. I took him aside and told him it would not be so. Jesus quickly set me straight, in no uncertain terms.

When it came time for the Feast of Unleavened Bread, Jesus sent John and me to make preparations for the Passover meal. That night in Jerusalem, Jesus spoke of his body and blood as we ate bread and drank wine. Jesus told us that on that very night we would all scatter like sheep. I boldly declared to him that I would not fall away . . .  that I would follow him anywhere and even lay down my life for him!

I’ll never forget what he said to me: “Will you really, Peter? Will you really lay down your life for me? I tell you the truth, before the rooster crows today, you will deny three times that you know me.” I was puzzled.

After supper that evening, Jesus took a group of us to a place called Gethsemane where he often went to pray. He led James and John and me a little farther and asked us to keep watch while he prayed to his Father. I hate to admit it, but we couldn’t keep our eyes open. We slept while he prayed.

Suddenly we woke up and saw a large crowd armed with swords and clubs. Judas, one of the twelve—our companion for three years—was leading them. I thought I was dreaming! They seized Jesus and arrested him. Suddenly I knew this was no dream. I quickly drew my sword and cut the right ear off of the high priest’s servant! Jesus told me to put my sword away unless I wanted to die by it. In the midst of all the commotion, even as he was being led away, Jesus bent down and did what only he could do. He touched the injured man and healed his ear.

Most of the disciples scattered for fear they’d be arrested too, but I followed at a distance, right up to the courtyard of Caiaphas, the high priest.

As Jesus was tried by the Jewish court, I sat by a fire in the courtyard.

It’s all a blur to me, even now, but I behaved just as Jesus had said.

Who, me? One of his disciples? I tell you I am not!

A Galilean? I swear to you by Jehovah God, I don’t know the man! All of you leave me alone!

Just as He Said

The rooster crowed, and I’ll never forget that look from Jesus! I slunk away until I was alone, and then I wept.

It was a horrible day! Jews in the crowd screamed at the Roman governor, Pontius Pilate, to crucify Jesus. I watched from a distance as Jesus was hung on a Roman cross as if he were a criminal. I felt responsible. After all, I had denied even knowing him.

After he died, Jesus’ body was placed in a borrowed tomb. On the first day of the week, some of the women who had followed Jesus went to the tomb to anoint his body. When they arrived, the Roman seal had been broken and the huge stone had been rolled away from the tomb’s entrance. Mary Magdalene came running to John and me crying, “They have taken the Lord out of the tomb, and we don’t know where they’ve put him!”

We started running for the tomb, and John reached it first (I’m a better swimmer than runner). John looked in and saw the strips of linen lying inside. He said to me, “Peter, you go in and look for his body . . . I’m not going in there!” I walked into the tomb and saw the burial cloth that had been around Jesus’ head. I couldn’t believe my eyes. Then I remembered that Jesus said he would rise up on the third day.

After he arose from the tomb, Jesus walked the earth 40 days. He appeared to many people. One day, very early in the morning as we fished, a man called out from the shore to ask if we had caught anything. “No,” we replied. He told us to throw the net on the right side of the boat and we would find some. Hmm. It worked once, so why not? We cast the net from the right side of the boat, and as soon as we did, we caught so many fish we couldn’t even haul the net in. This time I counted them—153 fish to be exact! Suddenly John recognized him. “Peter, it’s the Lord! He’s the one standing on the shore!”

I jumped into the water and hurried to the shore, the others following behind me in the boat. Jesus had breakfast waiting for us . . . more fish and bread. After we finished eating, Jesus asked me three times if I really loved him. I told him he knew all things; he knew I loved him!

I’ll never forget what he said to me: “Feed my sheep.” And then he said that simple but profound phrase to me again: “Follow me!” When he had first called me, even before he gave me a new name, he had said that. It wasn’t always easy. And to this day, every time I hear a rooster crow, I am reminded of how quickly I could deny him. But he forgave me. He restored me. He allowed me to assure him of my love for him, not once, but three times that morning on the shore of Galilee.

That’s what his resurrection from the dead is about—bringing restoration and wholeness to any who need it. He is alive today and he continues to call to men and women, “Follow me, and I will teach you how to fish.” And, he knows how to fish! Follow him! You will never be the same again!

* This article, based on biblical events, employs some creative storytelling that includes fictionalized dialogue and description.