Sometimes God shows up in strange places . . . like an afternoon United Airlines flight from Denver to Houston.

At the time, my life was a wreck. My career was gone. My marriage in trouble. My dreams paused. My faith wearing thin. The Great Recession had left me unemployed and broke. I was depressed, skeptical, cynical, and angry.

I survived through sporadic speaking and preaching but now wearied from the travel. I didn’t want to go to Houston. I was ready to quit the ministry, find a decent paying job, and live in peace.

I despised ever accepting God’s “call into ministry.” I questioned whether I ever had one. The “ministry life” had burned me one too many times.

And now I was booked on a flight to Houston, Texas . . . to speak and pastor.

I boarded the plane to more frustration. It was overbooked and I drew the dreaded middle seat. All around me were sweaty teens, harried moms, screaming toddlers, and unshaven men eating smelly meals. I wasn’t a happy camper.

I squeezed into the middle seat with a scowl.

A twentysomething woman took the window seat. She was in her own world and I gladly left her alone. In the aisle seat sat a fiftysomething man smartly dressed for a Texas business meeting. His eyes caught mine as I plugged in my headphones. I closed my eyes and waited for takeoff.

The man tapped me on the shoulder.

“How are you doing today?” he asked.

The intrusion annoyed me, but I answered, “I’m fine,” and closed my eyes again.

I didn’t lie. “F-I-N-E” perfectly described me: Frustrated. Irritated. Nervous. Exhausted. Only when he pressed for more conversation did I relent. We chatted about family and work. I found the man interesting, likable, and, strangely, pastoral.

He owned a flooring and carpet store in Worland, Wyoming.

He asked me what I did.

“I’m a speaker and writer,” and then I added how I used to pastor. He told me he led a church too. Our conversation suddenly took flight. We talked about everything.

At one point, I surprisingly confessed my dark struggle with God’s calling. I shared my doubts, fears, regrets, and anxieties. I told him my days in ministry were probably numbered.

And that’s when things got weird.

The man asked if he could pray for me.

“Sure,” I half-heartedly muttered, wondering what was happening.

He placed his hand on my shoulder and started to pray. I didn’t expect a long prayer. Give him a couple minutes and he’ll be done, I thought, but the man prayed 5 minutes, then 10, then 15.

To my surprise, nobody seemed to notice. He prayed with the thunder of Elijah for God to bless me with spiritual strength, peace of mind, joy of life, and passion for ministry. He prayed for my health, family, finances, and dreams. He begged that God’s purpose and plan for me would always be discernable.

The whole situation felt unbelievably strange. At one point he buried his head in my chest and wept. His tears soaked my shirt as he begged God to protect me from evil. Even when the flight attendant leaned in for my drink order, she didn’t notice this praying giant . . . still praying over me! It was like his seat was empty.

His prayer eventually ended (but our conversation didn’t).

I felt unimaginably different and incredibly blessed. I sensed a supernatural relief with a divine inoculation of courage, strength, resolve, and hope. I was literally recommissioned and spiritually recharged for ministry.

When we reached the terminal, we exchanged names.

His name was both angelic and divine.

As my new friend disappeared into the crowd at George Bush Intercontinental Airport, Hebrews 13:2 crossed my mind about “entertaining angels unaware.”

Years later, I found his business card. I called the number for his store and learned Michael King was indeed real . . . and he had recently died. When I related my story, his former employee laughed and said, “That’s just like Mike!”

Someday, in Heaven, I want to find and thank Michael (God’s angel to me that day).

He refocused my purpose and restored my ministry calling. I’ve never felt like quitting again.  I also learned God sometimes shows up in mysterious ways. 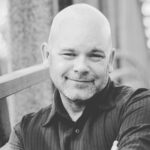 Dr. Rick Chromey is the founder and president of MANNA! Educational Services International. and the author of GenTech: An American Story of Technology, Change and Who We Really Are (Morgan James, 2020).