In a scene from Walk the Line, a 2005 biographical movie on the life of Johnny Cash, Johnny and his band are in a studio with music executive Sam Phillips. The musicians are auditioning a gospel tune, but they are performing with little emotion or conviction. Finally, Phillips interrupts: “Hold on. Hold on. . . . Do you guys got something else?”

After some interesting dialogue where the angry singer says Phillips is accusing him of not believing in God, Cash finally protests, “Well, you didn’t let us bring it home.”

“If you was hit by a truck and you were lying out in that gutter dying, and you had time to sing one song, one song people would remember before you’re dirt, one song that would let God know what you felt about your time here on earth, one song that would sum you up, you telling me that’s the song you’d sing? That [song] . . . about your peace within and how it’s real and how you’re gonna shout it? Or would you sing something different? Something real, something you felt. Because I’m telling you right now, that’s the kind of song people want to hear. That’s the kind of song that truly saves people.”

If you’ve seen the movie, you know that was a turning point for Johnny Cash because, after a brief pause, he began to sing “Folsom Prison Blues.” And the rest is history. . . .

The Missing Piece of Your Sermon May Be You

Several years ago, I served a church in a suburb of Tulsa, Oklahoma, my hometown. During that time, God was faithful, and the church began to experience significant growth. I’ve always given a lot of attention to preaching, but because in the early years I didn’t have any staff, I was busier than I had ever been.

One week I was scrambling for a message and threw something together in less than a day. I thought it would work because I had found a simple outline related to the response of King Josiah when the Book of the Law was discovered in 2 Kings 22. I preached that message and went home relieved that I had survived the weekend.

On Monday, a man who was a great encourager to me came to my office and told me he felt grieved because the message I delivered did not come from my heart. He basically said, “There was something missing in your message.” And he was right. The something missing was me. That message didn’t come from my study, or my prayer, or my personal conviction. As a result, it wasn’t authentic . . . it wasn’t real. I learned a great lesson that day from a man who had continued to encourage me, only in a different way.

Phillips Brooks, a 19th-century American Episcopal clergyman, once said, “Preaching is the presentation of truth through personality.” By that he meant that truth must be embodied. Using this as a basis, we can say authentic preaching is what happens when you preach the truth of God’s Word with your own voice.

As important as it is to find your own voice, however, the greater emphasis must always be on the truth of God’s Word.

In an article at biblicalpreaching.net,Peter Mead shares five preaching paradoxes from John Stott. One of those paradoxes is, “Authentic preaching is both gifted and studied.” In commenting on that paradox, Mead writes, “We need the gifting God has given us (personality, ability, strengths, etc.), and we need to do the work in our study to be able to preach well.” Then he asks, “Have you started to lean on your gifting to the detriment of study?” I would add this question, “Have you/we started to lean on programming to the detriment of content?”

Let me explain what I mean. Like many of you, I read the blogs of different church consultants. I know I don’t have all the answers, and I appreciate the wisdom shared by the handful of people I believe have their finger on the pulse of the church today.

In his 2021 blog entry, “Three Things that Will Be True about Growing Churches in the Future,” Carey Nieuwhof writes: “An Experience OF God Will Replace Information ABOUT God.” I don’t disagree with that statement because Nieuwhof says later in his blog, “Both the digital explosion and the cynicism of our age have left people hungering for a transcendent touch.” In other words, people hunger for more than just information.

It’s a mistake, however, to lean so heavily on creating an experience that you forget about the importance of content. That’s especially true when you consider the supernatural aspect of Scripture, described this way in Hebrews 4:12: “For the word of God is alive and active. Sharper than any double-edged sword, it penetrates even to dividing soul and spirit, joints and marrow; it judges the thoughts and attitudes of the heart.”

Create an Environment of Transformation

Authentic preaching can be current by focusing on the present-day realities of life, and it can be biblical by providing the only real answer for the present-day realities of life. One needs not preclude the other. We shouldn’t get so focused creating an experience that we allow things outside the truth of Scripture to become a bigger part of our message than the Scripture itself. We don’t preach simply to provide information, but neither do we preach to momentarily distract people from the troubles of life.

Ultimately, we preach to create an environment of transformation as the Holy Spirit takes the Word of God and changes someone’s life from the inside out. We do that well when we use our own unique voice to share biblical truth in a way that is both creative and convicting.

Several years ago, while preaching through 1 Thessalonians 5, I came to verse 16 which says, “Be joyful always” (Good News Translation).I wanted to point out the difference between worldly joy and godly joy. Worldly joy is based on a feeling—you have joy when circumstances cause you to “feel” joyful. In contrast, godly joy is a feeling based on a fact and, because of that, you can be joyful even when you don’t “feel” joyful, because of the presence and promises of God.

I grew up in Oklahoma and I’m a lifelong Oklahoma Sooners fan. At that time, I had just gone through the painful experience of seeing my beloved Sooners beaten by Boise State in the 2007 Fiesta Bowl. So, to illustrate worldly joy (which is based on a feeling) I included in my message a summary of how for the first three quarters of that game I had no joy because the Sooners were being beaten handily. In the fourth quarter, however, things began to change, and the Sooners found themselves with the lead with just 1:02 left in the game. But then, with just 16 seconds left on the clock, Boise State used a perfectly executed “hook and lateral” play to tie the score. The Broncos went on to win in overtime.

As I recounted each of the significant plays during my message, I would either lift my hands up and shout, “Great joy!” or hang my head and say, “No joy.” By the time the story ended, the entire congregation had joined me in my “great joy” and “no joy” exclamations.

To this day, people still talk about that message, and use the words, “great joy” or “no joy” in their conversations with me. We recently celebrated my 20th anniversary at Mount Pleasant Christian Church and my entire staff wore T-shirts that said, “Great Joy.” I sometimes joke it will be the only thing some people will remember about me.

But once I had clearly established the definition of worldly joy, I was able to give a deep biblical explanation of the godly joy that is always available to us through our faith in God. That might not sound like a big deal because there’s no way I can replicate the energy of the room by simply recounting the story, but that’s an example of using my own voice to preach the truth of God’s Word in a way that left people with an unforgettable experience.

When it comes to preaching, there will always be a temptation to be more clever than clear, more entertaining than engaging, and more therapeutic than prophetic. But authentic preaching happens when you preach the truth of God’s Word with your own voice in a way that challenges, convicts, and points people to Jesus. And while you may not have the seemingly unlimited gifts and resources of a lot of famous preachers who, in this digital world, are just one click away, don’t underestimate the power of your voice.

In the introduction of his book Choosing to Preach, seminary professor Kenton Anderson wrote:

At the beginning of one of my classes in preaching, I often ask students for the names of the preachers who have had a profound influence on them. I used to expect to hear the names of famous preachers, the ones on the radio or the ones with the largest number of hits on their website. But such is not the case. My students tell me about their home-church preachers, the ones they grew up listening to, preachers without much reputation beyond their neighborhood. They tell me about preachers who might not be flashy but who are consistent . . . who seldom fail to touch the minds or the hearts of the few and the faithful who rely on them.

When you stand up to preach the truth of God’s Word with your own voice, you open the door for God to change lives. That’s the power of authentic preaching. 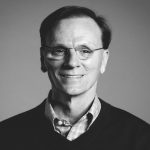