Who Are We? (A Crucial Question for Women in the Church)

A godly woman knows what God says about her and that she does not have to wait until she is thin enough, smart enough, perfect enough, strong enough, or socially accepted enough to add value to the church. A woman needs a place that understands and accepts her inevitable failings along the journey, just as a man does.

Jesus learned obedience through suffering, and women will do so as well. We need to experience that the church is not a culture of shame but a family of love, acceptance, and support. Yet, for so many women, this has not been our story. We are often the excluded partners of the faith. Here’s one incident from my life that highlights this truth.

Every spring, a large group of my friends, both male and female, would meet for the annual Bible lectureship at Pepperdine University’s beautiful campus in Malibu, California. We would attend different sessions, then gather for lunch, discussions, and debate (mostly the fun kind). It was so invigorating! We would meet again in our suite at night and wrestle with different ideas.

One day, seven of us, four women and three men, were headed back to a main session when a young man, a lecturer, stopped us and wanted to hear “our” exegetical thoughts on his take on a certain Scripture. But it turns out he wasn’t asking our entire group . . . he was only asking the men. It was the first time I understood that I would be privy to but not necessarily invited into the world of theology. My gender played a significant role in whether or not a brother in Christ would look to me for help with a perplexing exegetical Bible question.

The young man was kind and socially respectful, but upon finishing with the pleasantries, he straightway turned to a man and asked his question. After my friend answered, the lecturer gestured for a response from another male in our group . . . and then another. I was prepared to offer my perspective of the biblical text, but not once did he look to or gesture toward the women for an answer. Not once.

When his conversation (with the men) was completed, he thanked everyone (including the women) and was about to go on his way. I couldn’t believe it. Suddenly, so many uncomfortable moments in my life made sense—it was because I’m a woman. Then I spoke up, “Excuse me, can I ask . . . why didn’t you ask any of the women the question? Do you think we’re incapable of answering an exegetical question? Do only men know the Bible?”

He paused as he considered my questions, and then he sincerely apologized.

He said, “It was not intentional.” (Even though he asked each man individually.) He also said he would ponder his actions and perspective because this also perplexed him.

THE WORTH OF WOMEN TO THE CHURCH

That moment was formative. It was painfully disturbing for me. By this time, I had taught Bible studies for years and led and taught weekly in youth ministries, young adult conferences, and women’s conferences. I had formed many discipleship groups and taught many individuals the art and science of hermeneutics. Yet my gender precluded me from sharing my perspective.

Occurrences like this are all too common and quite damaging. Women experience this while their children watch. The sons and daughters being nurtured and taught by these women have front-row seats to this practice of disregard.

According to Barna’s “Households of Faith” research among practicing Christians, mothers are more likely to provide encouragement, advice, and sympathy to their teenagers than fathers. Teenagers seek out their mothers more often than their fathers to discuss faith, the Bible, and things that bother them. On a variety of metrics, these Christian women appear to be more present in their children’s lives than men. This statistic alone should highlight the need for a paradigm shift.

Bethune also stated, “Next to God we are indebted to women, first for life itself, and then for making it worth living.” What we do or don’t do for, to, and with women in the name of a Holy God is crucial to the church’s fruitfulness.

The average level of church attendance is down for all groups, but the rate of decline is much steeper for women, particularly those in the older age group. In 2003, half of women 35 and older attended church once a week; by 2019, that declined to just three in 10. While attendance has also declined among older men, the decline is far less significant. Women younger than 35 have always been more likely to be weekly attenders, but the rate of decline is similar. In 2019, 26 percent of women under 35 were actively churched, which is five percentage points lower than their older female counterparts.

These are staggering numbers.

THE WORTH OF WOMEN FROM GOD’S PERSPECTIVE

How the church embraces and understands God’s daughters is paramount. We must actively engage her with the essential and powerful truth in which she should be functioning now. Acts 2:17 says, “And in the last days it shall be, God declares, that I will pour out my Spirit on all flesh, and your sons and your daughters shall prophesy, and your young men shall see visions, and your old men shall dream dreams” (English Standard Version).

Since we are in the last days, God has undoubtedly poured out his Spirit on both sons and daughters, and thus we must make room for them both to prophesy. Yet, how can they do this if they’re not asked? How will they if they are not present? How can they if they are not received? How can we, the church, show up for an invisible war if we haven’t trained or allowed training for most of the warriors? The statistics clearly show the church is losing its women. We must never forget we are in a spiritual war and women are among the casualties. For far too long, we have been left on the sidelines.

Look at who Jesus allowed to travel with him.

Jesus traveled from one city and village to another. He spread the Good News about God’s kingdom. The twelve apostles were with him. Also, some women were with him. They had been cured from evil spirits and various illnesses. These women were Mary, also called Magdalene, from whom seven demons had gone out; Joanna, whose husband Chusa was Herod’s administrator; Susanna; and many other women. They provided financial support for Jesus and his disciples (Luke 8:1-3, GOD’S WORD Translation).

Jesus embraced women, who were undoubtedly shamed by the culture, and these same women, the Bible says, financially supported Jesus and his disciples. Can you imagine how many more women followed Jesus because of that? These women were supported and accepted by Jesus and clearly, in response, they supported him. Jesus valued women beyond cultural stereotypes and limitations.

THE WORTH OF WOMEN IN THE CHURCH

Let’s transition to today: Is the church intentionally creating opportunities for women?

Christ himself gave the apostles, the prophets, the evangelists, the pastors and teachers, to equip his people for works of service, so that the body of Christ may be built up until we all reach unity in the faith and in the knowledge of the Son of God and become mature, attaining to the whole measure of the fullness of Christ (Ephesians 4:12-13).

Women, not just men, have a wealth of gifts that are not being used in the church.

Woman does not exclusively mean mother, cook, wife, and friend. The church must see that woman also means prophet, teacher, leader, influencer, CEO, publicist, doctor, financier, learner, professor, and more. Until the church sees, understands, and appreciates this, the growth of the church will be inhibited. The world is providing opportunities for women to give, care, love, support, belong, and heal, but many of our churches only provide places for women to sit. Is that who we are?

Many women are abandoning the pursuit of motherhood in exchange for the pursuit of professional success. If the church would help, I believe, women wouldn’t have to choose. If women found significance, self-worth, and value in the church, I believe it could change everything.

Paul told Timothy, “I long to see you, so that I may be filled with joy. I am reminded of your sincere faith, which first lived in your grandmother Lois and in your mother Eunice and, I am persuaded, now lives in you also” (2 Timothy 1:4-5). Paul saw the significance of Lois and Eunice in the life of Timothy. Do we see the significance of female influence in the church leaders around us?

Some Christian traditions view Mary Magdalene as an “apostle to the apostles.” Certainly, Jesus sent her to the apostles to tell them about the resurrection (John 20:17-18). Luke relied heavily on the testimony of women in writing both Luke and Acts.

As more women make history and find their significance outside the church, we must ask ourselves a question: Who are we?

Osharye Hagood serves as women’s director at University Christian Church in Los Angeles, California. She has also been leading people and coaching couples as a spiritual director and life coach for over 25 years. 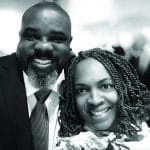