My father, Ed Schantz, had trouble making ends meet in the 1950s. He preached in small churches that couldn’t pay a living wage, so, with six children to feed, he took up door-to-door selling to augment his income, and he was very good at it.

It helped that he was nice-looking: clean-cut, with satin black hair, innocent green eyes, and a happy smile born of inner peace.

He started by selling Wear-Ever aluminum cookware. Whenever possible, he would arrange to cook a meal for the prospect, while giving his sales pitch as he went along.

“These aluminum pans heat up 16 percent faster than steel or iron, saving you electricity. The unique lids hold in the nutrients and the flavor. And these pans will last two lifetimes. Wouldn’t you love to have a set of these?”

Then, for a while, he sold a fire-extinguishing powder that came in a round box like Pringles potato crisps. He would go downtown, set an old dishpan on the sidewalk in front of, say, the hardware store, fill it with wadded-up newspapers, and set them on fire. When the store manager came running out to see what was going on, he would toss a handful of powder on the flames and snuff them out, like magic. The store owner was impressed and bought two boxes, but the local fire department was less impressed and urged him to find a safer approach.

His favorite product to sell was the large family Bible. The index to the Bible helped to sell them; it was a long listing of contemporary topics, such as “automobiles” (Nahum 2:4) and “flying saucers” (Ezekiel 1:15-20). It was hard for Dad to sell Bibles, however, without also selling the Savior, and sometimes a Bible demonstration would end with a trip to the church baptistery.

Inspired by my father’s sales success, I answered an ad on the back of a comic book to sell greeting cards door-to-door and earn “swell prizes.” Unfortunately, I was not an extrovert like my dad, and I approached every door with a mixture of hope and despair. When the door opened, I would say something like, “Hi, my name is Danny, and I live just down the street. I’m selling these really swell greeting cards, but I don’t suppose you need any.”

When Dad learned of my approach, he said, “You need to realize you’re doing those housewives a favor. You’re not begging for a handout. You’re sparing them a shopping trip and offering them unique cards they can’t find in stores. Be upbeat, and just assume she wants to buy them and ask her how many boxes she would like to have.”

That seemed a bit pushy to me, but the first time I tried it, the lady bought three boxes!

The qualities that made my father a good salesman also made him a good preacher. Not that he was an orator. He was not. Nor was he a great administrator. His office was messy, his daily schedule was “loosely” organized, and he dreaded board meetings like trips to the dentist.

What my father did best was to get people to make a decision for Christ, and he didn’t wait for Sunday to do it. He just assumed that everyone wanted to go to Heaven, so he gave everyone he met an invitation. He was friends with store clerks, librarians, auto mechanics, school principals, police officers, even the bank president.

After some small talk he might say, “Well, Jerry, have you thought about bringing the Lord into your life and your banking business? I would love to talk to you about that, when you are ready, and we would love to have you at church services at any time. They start at 10:30, and here’s my card. I think you would really enjoy it, Jerry.”

When I became a teenager, I thought about becoming a preacher myself, so I started going with my father on evangelistic calls.

After just a few teaching sessions with one individual, he paused and said, “Now, Robert, I have shown you what God requires of us to be forgiven of our sins and go to Heaven. Are you ready to give your heart to the Lord and be baptized?”

I was flabbergasted when Robert said, “Yes, Ed, I am ready to do that. In fact, I wish I had done this years ago.” I knew that Robert was a difficult man, but Dad reached him with a simple, direct question.

When I later expressed my surprise at Robert’s decision, Dad said, “Son, you never know what’s going on in people’s hearts. You must never hesitate to call for a decision. No matter how good your presentation, if you don’t close the sale, you have wasted your time. Always close the sale; close the sale!

Not surprisingly, my father’s favorite part of the church service was the invitation time. He lived for it.

“There is always the possibility that someone in that service is on the verge of making a decision,” he said. “If we don’t give them a chance to respond, they might never have another opportunity.”

During the invitation my father would get rather emotional. He saved his most touching stories for that time. When I teased him about the tears in his eyes, he got defensive. “Well, on the Day of Pentecost there was a lot of emotion. People were cut to the quick and cried out for help.”

“God gave us emotions to help us make decisions,” he added, “like, to get married, or to take a better job, and, yes, to choose Christ. Emotions are not the only factor in decisions, but it’s a mistake to disregard emotions.”

As I visit churches around the country, I am saddened to see that some of them no longer offer an invitation hymn, followed by baptism, although many churches still do. I wonder why they would want to waste emotions raised by a stirring song service or a powerful sermon, and then just drop the whole subject at the end of the service. What a let-down!

Yes, there are other ways to lead people to a decision, but it’s not necessary to abandon the tried-and-true public invitation in order to implement those alternatives.

When people make a decision in public and are baptized in public, it inspires others to make the same decision. And it lifts the mood of the whole congregation to see new members added, giving them a chance to encourage the new convert with a hug and congratulations.

As a teen, I was sitting in the audience at a revival meeting. In front of me was an old man who had been coming to church all his life, but he had never accepted Christ as his Savior, even though many people had tried to reach him. He was short, with thin gray hair, and he walked with a limp.

When the first strains of “Softly and Tenderly” began, he stepped into the aisle and hobbled down front, wiping his eyes with a hanky as he went. When he came up out of the baptistery with a shout of joy, and hugged my dad for baptizing him, it was the most powerful sermon I have ever witnessed.

Why did it happen so late in his life? Did he do it for his grandsons? Was he having chest pains that made him think about eternity? Did he want to be with his beloved and godly wife who by that time was in Heaven? We will never know. But it was a vivid reminder that it’s never too late to offer an invitation to Heaven.

Daniel Schantz is a professor emeritus of Central Christian College of the Bible, Moberly, Missouri. 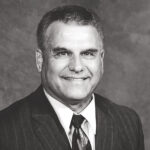 Daniel Schantz is a professor emeritus of Central Christian College of the Bible, Moberly, Missouri.