On a recent mission trip to create a clean water source for a rural community in East Africa, I was invited to the wedding of a Somali man and woman. Both had become followers of Christ, and they were quietly transported to a Church of Christ in an area where many Muslims live.

As soon as we passed through security, we were warned against taking photos or videos. This was partly due to concern about persecution for the bride and groom, but it was more about another guest named Ibrahim, who is known to Muslims as the big kafir (the big infidel). On the other side of the church gates, however, many respectfully refer to Ibrahim as Father.

Ibrahim is a familial father to several of the people we met there, including the Somali couple he was marrying that day. But he is also a father figure to the many people he has led to the Christian faith. He is the first known Somali gospel preacher, and perhaps the first Somali Christian convert.

I was eager to learn more about Ibrahim, so I arranged to meet him at a private residence where an underground church assembles. The testimony he shared with me is akin to that of the apostle Paul, demonstrating that, “We must go through many hardships to enter the kingdom of God” (Acts 14:22).

Ibrahim was born under a tree and grew up a nomad. He was only 6 years old when his father was killed by a bull that fell into a well on top of him. His mother was left to move from place to place seeking pastureland for their 160 cows and 9 camels. She cared for Ibrahim for the next nine years, teaching him the Koran and enrolling him in a Muslim school. From childhood, Ibrahim learned that anyone who is not Muslim is an infidel and should be killed. He went on to study under a Muslim sheikh for two years, and he became an imam, leading a local mosque.

From an early age, he was exposed to and engaged in conflicts between clans, mostly over pastureland, camels, and control of water in the Somali region. As a young man, Ibrahim was drafted to fight for the British colonizers. Serving in the British army as an askari, or native soldier, in the mid-1960s, Ibrahim was commissioned to keep peace at a large gathering where a Christian missionary was scheduled to speak.

Ibrahim recalls that a white man who preached the gospel there read from Exodus the account of the Israelites crossing the Red Sea. Ibrahim recognized this account from the Koran and wanted to learn more. The missionary gave Ibrahim a Bible and encouraged him to keep reading; and Ibrahim’s personal study of Scripture led him to conclude that the Koran was a modification of Hebrew Scriptures. His acceptance of the Bible as the inspired and authoritative Word of God led him to faith in Jesus Christ.

Ibrahim recalled the persecution that ensued. “When I say the Koran is modified from the Bible, they are beating me.”

His new faith in Christ led him to be baptized in obedience to Christ’s command, but he wanted to do more. He arranged to be baptized a second time so that he could declare his faith to his whole tribe. About 400 people came to witness Ibrahim’s second baptism, including 30 Somali leaders. He testified to them that he believed in Jesus Christ, and he was not afraid. There he was first named kafir for accepting the gospel.

Ibrahim’s first evangelistic efforts included standing on top of a vehicle with a loudspeaker to declare the gospel of Jesus Christ. He has been shot at three times and stoned several times during his preaching over the years. He has been imprisoned. Additionally, more than a dozen people whom he led to Christ have been shot to death by extremists, their wives and children left without fathers.

Ibrahim has planted 22 churches where he both preached and completed building projects. He helped translate the Scriptures from Swahili into Somali, and he made several journeys on foot to smuggle hundreds of Bibles across the Somali border on the backs of camels. A trip would take seven days one way, and Ibrahim traveled by night to avoid detection. The Bible had not been available in the Somali language before, and possession of a Bible could be treated as a capital crime. Yet, Ibrahim was determined to distribute the Christian Scriptures. In rural parts of Somalia, he broke the Bibles into pieces and gathered by night with groups who read God’s Word by firelight.

During our interview, Ibrahim cheerfully produced from his pocket the Bible he has carried for 30 years. He is over 90 years old but can still read its small print without glasses. He called on a person sitting near him to read to us from his English Bible. No one in the room could hold back tears as we considered his story against the backdrop of Paul’s letter to the Christians at Philippi. “Yet it was good of you to share in my troubles” (Philippians 4:14).

Ibrahim’s life purpose has not shifted nor has his passion for Christ waned through years of planting, preaching, and persecution.

“If God [is] willing,” he says, “I will go to Somalia and preach the gospel.”

He speaks via the internet for Somali Bible study groups. He recently was honored at a secret gathering of Somali Christians and missionaries to Somalis. At their conference, Ibrahim was anointed with camel milk to be the ugaas (paramount chief) of the Somali believers. Other ugaas are anointed with camel milk to nonreligious positions as chiefs of Somali clans. Yet, because Somali Christians come from many different clans, they expressed their unity in appointing the oldest Somali believer and preacher to be their ugaas and to act as their spiritual adviser based on his experience and wisdom.

Ibrahim now lives in a rural area where clans and tribes still persecute him through threats and attempts to seize his property. Yet he does not live in fear.

Far fewer than 1 percent of his beloved Somalis are Christians, thus the Somalis qualify as an unreached people group. Islam is the state religion of Somalia, and Muslims are prohibited from converting to or propagating any religion other than Islam. The law of the land complies with the general principles of sharia. Some Somalis seek refuge in nearby countries. If the people try to attend a church service, they may be stopped, questioned, and arrested.

As Ibrahim continues to fight the good fight, finishing the race while keeping the faith, he is ready to switch from loudspeaker to podcast. Our church recently sent funds to purchase equipment so that Ibrahim can continue preaching to people who need an introduction to the inspired Word of God so that they too may come to faith in our Lord Jesus Christ. 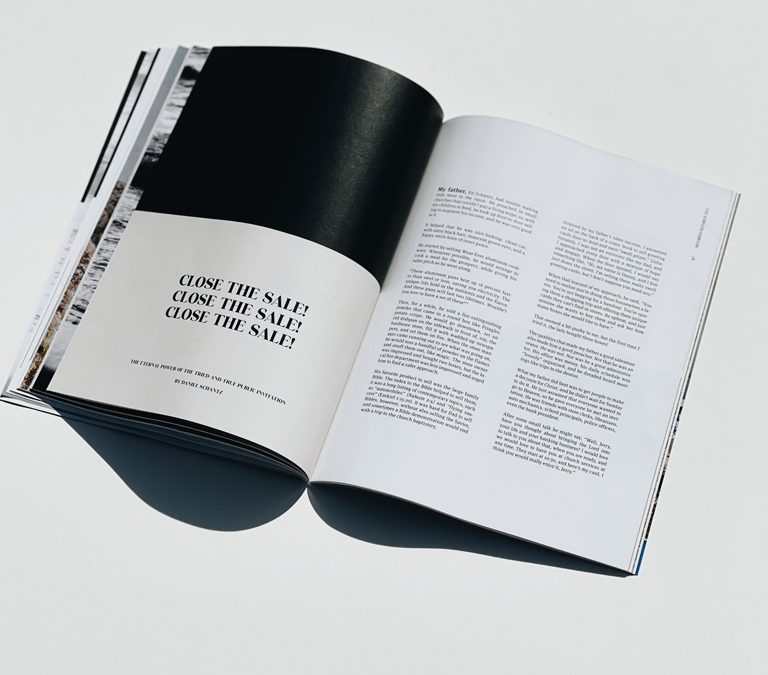 The Eternal Power of the Tried-and-True Public Invitation