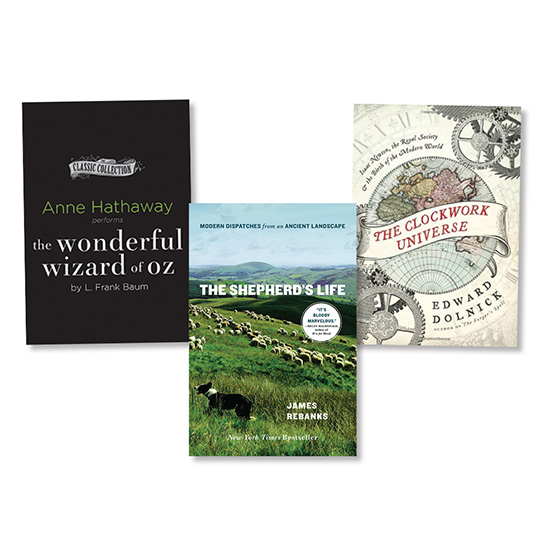 The Clockwork Universe: Isaac Newton, the Royal Society, and the Birth of the Modern World
Edward Dolnick
New York: HarperTorch, 2011

OK, go ahead and laugh. Here I am, a great-grandfather, hanging on to every word of The Wonderful Wizard of Oz, without a child nearby to provide cover for me. Maybe there’s truth in this “second childhood” charge after all.

Or, the hypothesis I prefer, maybe there’s something special about the story. Like most persons of my generation, I already knew the plot. I saw the movie. I fell in love with Judy Garland and her impossible friends: the cowardly lion, the heartless tin man, the scarecrow with no brain, and Toto, her irrepressible dog. But I had never read the book.

It’s even better than the movie.

Strictly speaking, I still haven’t read the book. I listened to actress Anne Hathaway read it. She doesn’t just read, either; she dramatizes, her amazingly versatile voice playing all the parts. Each character comes distinctly, vividly alive. She held this second-childhood admirer spellbound.

Like most of the best children’s books, this one is for adults too. And not just as an invitation to indulge our imaginations again, which it does offer, but because it raises age-old issues like good and evil, mercy and grace, love and sacrifice, and the meaning of friendship. Since it purports to be a children’s book, it catches adults unaware. We think we are simply revisiting a magical land of our childhood—and we are—but then we are surprised to discover ourselves pondering life’s most important values.

L. Frank Baum’s classic tale is so good, I’m not even embarrassed to admit I liked it.

Edward Dolnick’s The Clockwork Universe takes us back to filthy, disease-ridden, God-fearful, 17th-century London, where a handful of “mad scientists” (for so the Royal Society members appeared to their less curious contemporaries) peered through telescopes and squinted through microscopes and dissected whatever they could get their hands on, trying to figure out how everything works. It was a paradoxical time, a deeply religious culture giving birth to the secularism that finally buried it.

Dolnick assembles a cast of eccentrics who are almost as interesting as their discoveries, their feuds and controversies a good reminder that the 21st century holds no monopoly on political infighting and its appalling meanness.

They lived in an even meaner, more dangerous age. People died young then, taken away by plagues, religious wars, fires, and murder (the homicide rate was five times our own).

Amid this chaos, the earliest members of the Royal Society, men (only men in those days) like Robert Hooke, Robert Boyle, Samuel Pepys, and Isaac Newton, sought order and truth by conducting rudimentary experiments (some of them life-threatening).

Most—but not all—of them worked on the premise that the best metaphor for explaining how the world is run is a clock. That theory had serious theological implications, of course. Once God had made and wound the clock, what else was there for him to do?

Isaac Newton’s discovery of the governing mathematical rules fueled the debate. His further discovery of gravity raised the stakes even higher. Newton himself never wavered in his belief in God’s sovereignty; he meant his work to glorify God. The unintended consequence of the discoveries of Newton and his fellow Society members, however, has been to shove God to the edge, where there is, in the opinion of some, nothing for God to do.

I am not of that opinion.

Reading James Rebanks’s The Shepherd’s Life took me on a sentimental journey back home. Knowing Joy and I would be including the United Kingdom’s famed Lake District in our Next Phase (our term for our post-retirement wanderings), friends gave us a copy so we would be ready to see what we would see. It did that; it also excavated long buried scenes from my childhood.

The author’s graphic descriptions of shepherding are what did it. My maternal grandfather was, among other vocations, a shepherd. I visited his spread in Eastern Washington only once, but the memories linger. He was a gentleman shepherd. His son-in-law actually did the hard work. As I recall, the venture didn’t last many years. Joy’s grandfather, on the other hand, was a shepherd for much of his life. You’d think we’d like lamb dishes, but we don’t.

Rebanks is the son of a shepherd who was the son of a shepherd. Three generations of Rebankses populate these pages. He inherited, but he also chose this life; he dreads how encroaching modernity is threatening it. He traces the roots of sheepherding in the Lake District back to the beginning of recorded history; nothing much changed from millennium to millennium until the 19th century. That’s when three prominent authors called outsiders’ attention to it—and that hasn’t been so good for it.

The famous romantic poet William Wordsworth was the first. He remains a looming presence. His memory is enshrined in residences in Grasmere (the famed Dove Cottage) and Rydal Mount and in his birth home in Cockermouth. His name alone draws tourists by the thousands every year.

Beatrix Potter of Peter Rabbit fame adds to the crowd. She was herself a shepherd, buying up several farms in the Lake District. Rebanks treats her with the respect due one’s own kind.

Alfred Wainwright devoted most of his life to trekking over and meticulously sketching more than 200 fells (hills). He published his work in a seven-volume tome, A Pictorial Guide to the Lakeland Fells, an enormous labor of love.

Together these three altered the culture they strove to preserve. Rebanks tries not to resent us tourists too much, since we help pay the bills. But as he rightly complains, we simply don’t know and can’t fully appreciate the shepherd’s life. He wrote this book to educate us.

I mentioned my grandfather’s brief foray into shepherding. My other grandfather probably didn’t know the first thing about sheep, but he could have written a book about cows. Because of him I grew up in dairy country in a town widely known for its cheese, Tillamook, Oregon. (More than once Delta Airlines has garnished our meal with Tillamook cheese. Obviously a quality airline!) So I grew up with cows.

When Rebanks describes the labors of a shepherd’s life, its rhythms dictated by the passing of the seasons and the welfare of the flock, I think of the farmers I have known whose days are equally chained to rituals: milking and breeding and calving and haying. Life for them is about the birth-and-death cycles of the animals, about mud and muck and manure, about the cold and wet and racing to harvest and store the winter’s hay before rains ruin the crop.

Like Lake District shepherds, Tillamook farmers have had to adjust. Modernity encroaches; conglomerates swallow up farms too small to compete. Some still eke out a living; others had to give up—to give up the farming, but not the love of farming.

This columnist, who never became a real farmer, understands Rebanks’s love of the life. And like him, I hope it never disappears.