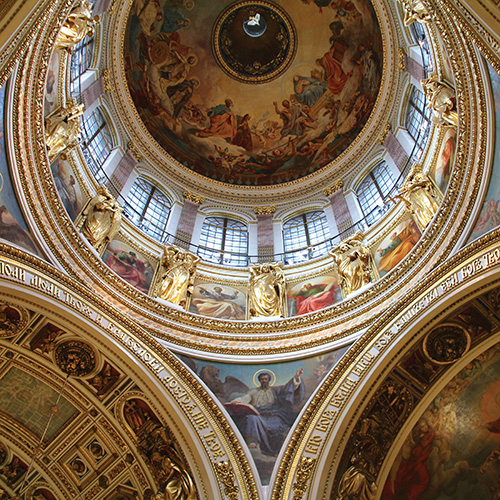 Where early Christians worshipped and why

By Pat Magness and Lee Magness

How have believers through the centuries used church buildings to express and extend the gospel? A simple survey can lend insight to those making church building decisions today.

Where have believers worshipped God over the centuries? The Psalms picture ancient Israelites giving praise to God as individuals in a variety of settings. But the construction of the tabernacle, the building of the temple, and the development and spread of synagogues demonstrate that the use of buildings for corporate worship was also a high priority among God’s chosen people.

What about the followers of Jesus, the people of the new covenant, the body of Christ, the church? As a young married couple, we led worship services one summer on the rim of the Grand Canyon—an unorthodox but inspiring setting! Today Christians meet for worship in buildings representing a dizzying array of architectural styles, from private homes to corporate complexes to movie theatres to warehouses to traditional rural church buildings to urban cathedrals.

Where we worship says something about our view of the church and of Christian worship. So where did the earliest Christians meet for worship? How did their places of worship change over time and why?

House Churches and the Family of God

In the earliest decades, the followers of Jesus met in “house churches,” private homes, not in “church houses,” buildings constructed specifically for Christian worship. Acts 2:46 describes the believers praising God not only in the Jewish temple but also “at home.”* Acts 12:12 describes Peter, miraculously released from prison, going directly “to the house of Mary . . . where many had gathered and were praying.”

While any large room would do, there is some indication the room selected was often a dining room and often on an upper story. In Troas Paul found the believers “in the room upstairs.” Paul preached so long into the night that “a young man named Eutychus, who was sitting in the window,” not only fell asleep but fell out of a third-story window (Acts 20:7-12). Now that was an upper room!

From the evidence in the New Testament, archeological exploration (there are no church building remains from this period), and an understanding of the political realities (Christianity was not officially recognized), it is clear no specific church buildings were erected in the first two centuries. There was extensive religious architecture, but these buildings were temples dedicated to pagan gods like Jupiter or to Roman emperors (the Temple of Trajan, for example).

Church Houses and the Body of Christ

But by the mid-200s, even though Christianity was not yet an officially sanctioned religion, there were enough Christians that borrowing a room in a private home was no longer sufficient. Christian communities began to purchase and remodel structures for their assemblies.

The Greek word ecclesia is used to mean Christian assembly in the New Testament, and the term used for these meeting places was domus ecclesia, “the house for the assembly,” that is, the house for the church. The believers were transitioning from a house church to a church house.

The primary need was for space—an open, interior space for the assembly of worshippers. There were other needs also—like a platform for bishops (elders), a vestibule for those still being taught, a baptistery, a storage room for charity work, and so on—but the main consideration was a large assembly room.

And while this large assembly room may not have conveyed the image of the “family of God” as well as a private home, it did reflect the symbolic language used by Paul in describing the church in the letter to the Corinthians: “Now you are the body of Christ and individually members of it” (1 Corinthians 12:27).

In the dominant religious architecture of the time, the Roman or Greek temple, only a relatively few people, the priests or rulers, entered. People in general were outside, and the temple was a backdrop to the ceremonies. The idea that the building should be structured to accommodate the assembled worshippers as a whole was a new idea, conveying in structural terms the body of Christ.

One archeological discovery that demonstrates this transition has been found at Dura-Europos, Syria. Between AD 230 and 260, a private home appears to have been completely remodeled there for Christian worship. Archeologists have also found remnants of early third-century apartment house churches, later incorporated into fifth-century
church buildings and (today) often under the floors of these larger, later buildings.

These remains give evidence of two-story apartment houses being remodeled to have a large upstairs assembly room; in one case the remodeling was done to incorporate a small adjoining bathhouse for use as the baptistery. So by the middle of the third century, the transition was well under way to the church house.

Basilicas and the House of the Lord

After the widespread persecution of Christians by Diocletian in the very early fourth century, during which Christian places of assembly were systematically destroyed, Christianity was made a legal religion in the Edict of Milan by Constantine in AD 313. Once Christianity had official sanction and official funding, the building of churches began in a remarkable way. Many churches were built in a variety of styles throughout the Roman empire.

The basilica was the dominant style used by these fourth-century Christians. A basilica was a large public hall, often a hall of justice, subdivided by rows of supporting columns, creating a central hall (nave) and side aisles. Basilicas also featured an upper “window wall” called a clerestory (pronounced CLEAR-story) and an apse, a semicircular area opposite the front door. It could have a flat ceiling or an open-timbered roof.

The basilica model was useful to Christians for a number of reasons, including the fact that it did not remind people of a pagan temple. It provided a large interior space suitable for gathering the whole congregation. This new Christian meeting place would be called basilica id est dominicum, meaning “assembly hall, that is, the house of the Lord,” continuing the symbolism of the church building as a meeting place for the body of Christ, their Lord.

Central Domed Churches and the Lord of All

After the Edict of Milan, many memorial buildings were constructed in honor of Christian martyrs, commonly round or octagonal structures with a central dome. This central-type building plan became the dominant style in Orthodox churches for well over a thousand years, and you can visit them today from Ravenna, Italy, to Istanbul, Turkey, and beyond. This style has consistently been associated with Jesus as King.

In building after building, the mosaic in the dome floating high above the worshippers features Christ Jesus as the Lord of the Universe (Pantocrator). Entering such a space fills the worshipper with awe and reverence at the greatness of Christ who reigns “forever and ever.”

The Cruciform Church and Christ Crucified

In addition to the use of basilicas and churches with central domes, the fourth century also saw a modification to the rectangular basilica, one that has influenced church architecture to this day. This modification came early in the century, as is evident from the basilica built by Constantine on Vatican Hill in Rome to honor the apostle Peter.

While this basilica (often called Old St. Peter’s to distinguish it from the current St. Peter’s built in the 16th century) no longer exists, there are records about its structure and decoration. The nave itself was almost as long as a football field. The new feature was a transept, a hall cutting across the basilica, extending arms in both directions. In other words, this basilica became cross-shaped, “cruciform,” proclaiming in its very structure the cross of Christ.

Many other cross-shaped churches were built in the fourth century. The cruciform shape became very influential, and for good reasons. Besides being a practical, functional shape, accommodating large groups of worshippers and multiple simultaneous activities, it also by its very shape symbolizes the physical body of Christ, with the nave as the trunk, the transept his arms, the apse his head, and the crossing his heart. The church building made Jesus visible even as Jesus made God visible.

Objects of Faith or Expressions of Faith?

Constantine’s mother, Helen, made it her mission to build on significant sites in the Holy Land, from the Church of the Nativity in Bethlehem to the Church of the Holy Sepulchre in Jerusalem. These buildings, much extended and remodeled through the centuries, can still be visited today.

They differed from both the house church and the church house in a significant way: they were meant as shrines, memorials to great events, not primarily as places for the assembly of believers. They were not homes for a congregation of believers, living and working and worshipping together, but sites to be visited, places to be honored and remembered.

It is tempting to say that here is where the church went astray, building for the past and not for the life of the body of believers. The great Italian writer Dante believed it was Constantine’s legalization of Christianity and the imperial wealth pouring into the church that eventually corrupted church leaders. The same imperial wealth that could build immense and lavish shrines could also detract from the mission of Christ and the simple gospel message.

On the other hand, many of those who have visited these fourth-century shrines, like many visitors to the towering Gothic cathedrals and the soaring domed basilicas of the Renaissance, have found their faith renewed in contemplating these great edifices full of Christian symbolism, full of depictions of the stories of the Bible, full of light and color and music to the glory of God.

How should we think about church buildings? It is all too easy to fall into the trap of regarding the building as the church, too easy for a building to swallow up the financial resources of a group of Christians, too easy for the building itself to become a source of pride and object of reverence, and too easy for a building to become a source of division. After all, the world’s most famous sermon was preached on a hillside, the earliest baptisms were in rivers, and the first Lord’s Supper was shared in an upper room.

At the same time, we remember a day of touring in St. Petersburg, Russia, entering what looked like—and was—a very ancient church building. For decades, it had been used by the government as an ice skating rink. Yet when regulations against Christianity were even slightly relaxed, somehow the structure itself inspired local believers to reclaim this building for worship.

Buildings can inspire us and point our thoughts to God and to the redeeming work of Jesus Christ. Buildings are neither necessary nor sufficient for the church of our Lord Jesus Christ to fulfill its purpose, but buildings have been and can yet be an encouragement to and an expression of the church’s faith and mission.

*All Scripture verses are from the New Revised Standard Version of the Bible.