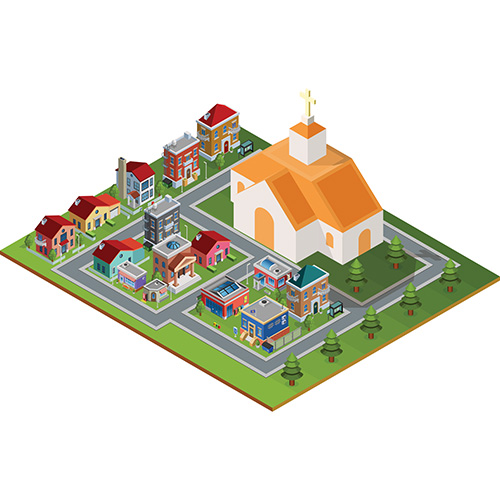 It’s easy to understand why small towns have small churches. We can visit a town of 3,500 and find several congregations with fewer than 100 people in each. In fact, some would say that small towns like small churches. Bristow, Iowa, for example (population 160), boasts of having “The Smallest Church in Iowa.”

One can readily explain a large church being in a large city. Finding a church of 1,000 in a city of 200,000 people—that’s reasonable. Most megachurches are in “mega” cities.

But, what happens when we encounter a church of 1,200 in a town with a population of 800? How can a small town have a large church? That was the question of the Large Church, Small Town Summit hosted by Randy Kirk, senior minister with First Capital City Christian Church, Corydon, Indiana, in August 2016.

At first glance, such ministries—large churches in small towns—would appear comparable to megachurches that you’d find in urban or suburban settings. No doubt there are at least some similarities. But what are their differences?

These churches are not in major population centers, but typically rural small towns, and the setting is the shocker! This became personally evident when Randy gave directions to FCCCC, which involved driving on state routes, county routes, and small side streets through a rural community only to find a large building in a location that seemed out of place. (FCCCC averages more than 900 in worship in a town of 3,200 . . . that’s 28 percent of the population!)

One of my first reactions was, “We have to rewrite the book!” Such churches cannot simply adopt the practices of peer megachurches, but must adapt them to fit their setting. While these congregations bear some similarities to their suburban and urban counterparts, the dynamics within them are distinctively different, setting them apart from what conventional wisdom says about ministry in big churches.

All “small towns” are not alike. Church leaders cannot assume that small-town culture is always the same, regardless of location. A small town in rural Missouri is different from a small town in Michigan’s Upper Peninsula. Ministry must be relevant, not just contemporary, and what is relevant to life in your small town may not appeal to my small town.

What attracts small-town folks in a rural community? Fishing, shooting, four-wheeling, and “mudding” are not on the weekly agenda for a typical megachurch. We need to use a missiological approach to small towns and develop a ministry that responds to their distinct needs.

You Determine DNA, Not the Community

Small towns are often small because they like being small. A large church in such a setting cuts against the cultural grain. Church leaders cannot allow the culture of the small town to dictate the DNA of the congregation. The church leaders determine the congregation’s DNA: they dare not let the setting determine the reality. Yes, churches are responsive to setting, even sensitive to it; but who a church is as a congregation is determined by God’s calling to make disciples without the perceived limitations of the setting. Congregations must be kingdom-minded in settings that value “smallness.”

Niche targeting is a popular ministry strategy in culturally diverse urban and suburban settings. It prompts churches to target a segment of the population and then design a ministry to reach them. To a certain extent, this is a luxury of their setting, but the situation with small churches is different.

Small-town congregations must be far more inclusive than their city counterparts. Ministry must be more broadly aimed. As one individual metaphorically quipped, “We do ministry with a shotgun, not a rifle.” And this can work in a smaller, less culturally diverse setting.

“I have become all things to all people, that by all means I might save some. I do it all for the sake of the gospel, that I may share with them in its blessings” (1 Corinthians 9:22b, 23).

“To an extent, we are the community service,” one leader told me, “almost like a chaplain and parish.” Small towns do not have the support services and options of a larger city. Often the church finds itself filling the role of counselor, support group, event coordinator, or even disaster relief. One simple yet profound ministry common to many of the congregations participating in the summit was providing a funeral meal, not just to those families suffering a loss in their own congregation, but to any community family without a church home! The congregations extended the service typically reserved for church families to their entire community, thus embracing Paul’s admonition: “So then, as we have opportunity, let us do good to everyone, and especially to those who are of the household of faith” (Galatians 6:10).

Large churches in small towns tangibly and publicly engage their communities. They don’t do this because they are large, but they grew because of their community involvement. In small towns, small churches may not cooperate. But this is less likely with larger congregations, which are more intentional about establishing very public, visible relationships with people of the town. If a church builds a gym, it’s not just for members of the church, but also members of the community.

Large churches in small towns have an active presence in high school athletic events and at county fairs, for example. If the church sets up a booth at an event, there won’t be a sign that says, “Ask me how much Jesus loves you. I’ll tell you!” Instead, in big and small things, the church will show its love for the community through selfless service. These congregations work alongside local government and serve with businesses to address community issues and problems, especially when a community crisis occurs.

Church-sponsored events, preferably free activities, are another means of staying connected to the community and drawing people into the congregation. Of course, this means activities are planned with the community in mind. Location, date, time, cost—all these factors are taken into account. Some events can occur weekly or monthly, but establishing a routine is crucial because many participants won’t be in church on weekends to hear announcements.

Many churches and individuals face financial issues, but small towns and the people who live in them typically have a higher level of poverty and a higher percentage of the population dependent on state or federal financial assistance. The community and church are typically comprised of blue-collar families who are more susceptible to plant closings and widespread unemployment. While this is not a challenge unique to the large church in a small town, it is an issue that besets them more frequently and to a higher degree than congregations located elsewhere. A church in such a setting may not have the funds to build a gymnasium like the one mentioned previously, but the church might be positioned to host sports events in a school gym.

Adult Sunday school or adult Bible fellowship are still relatively strong in small-town churches, especially when compared with their suburban and urban counterparts. This ministry model still works in the country setting.

The same is true of using hymns in worship. Even those outside the congregation know the words and tunes because these things are part of their culture. (Just listen to how frequently Christian themes are referenced in country music when compared with other music styles.)

These are specific examples of a larger trend—some of the “old ways” still work in rural, small communities. Cutting-edge, or bleeding-edge, ministry design isn’t really necessary for drawing people to Christ and your congregation in small towns.

However, for large churches, this is not an excuse to stop innovating and improving the quality of ministry. It’s about being relevant to your culture, not just contemporary or current.

Winston Churchill said, “You have enemies? Good. That means you’ve stood up for something, sometime in your life.” Small churches don’t typically like larger churches. That’s because larger churches demonstrate what is possible, even in a small community, when smaller churches have convinced themselves otherwise.

In the case of Christian churches that seem to grow and outpace their denominational counterparts, those other congregations sometimes critique and raise issues because they have to explain why another congregation is growing while theirs isn’t. These critiques are usually unfounded rumor, twisted hearsay, and theological diatribes that lead to inaction and jealousy.

In a small town, the rumor mill runs amuck, accentuating the propagation of the myth. Large churches in small towns are always the target of this kind of maliciousness. In fact, one minister said, “We know we’re doing something right when they start rumors about us.”

Becoming a Large Church in a Small Town

Small towns are not alike, and neither are churches. Large churches in small towns choose not to be limited by their setting. They creatively and intentionally engage their communities in disciple-making and kingdom-building ministries, despite the supposed limitations of their setting. These churches share many similarities with their urban and suburban megachurch counterparts, but they have rewritten the book of conventional ministry to flourish where they have been planted.

*Scripture quotations are from the English Standard Version of the Bible.