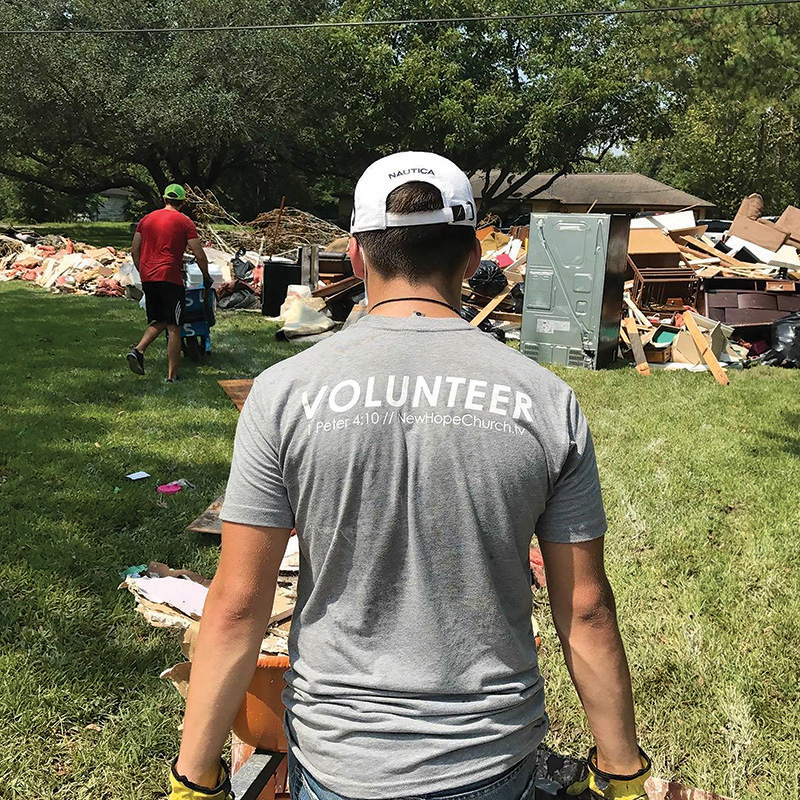 Hurricane Harvey, the first Category 4 storm to hit the United States since 2004, made landfall south of us on August 26, 2017. That put Houston on the “dirty” or rainy side of the storm. To make matters worse, Harvey stayed on top of Houston for days, pulling water from the Gulf of Mexico and dropping it on the region. Water rose in the streets, with every highway in Houston impassable because of flooding.

At one point, nearly 10 inches of rain fell on my town in only 90 minutes. Almost 50 inches of rain fell in just a few days. It was a worst-case scenario—a nightmare in slow motion from which we could not wake. The result: Your home either flooded or you feared it might flood. There was no in-between. It was a traumatic time in our city.

It’s estimated more than 100,000 homes were damaged by Harvey’s floodwaters, and 80 percent of those homes did not have flood insurance. They didn’t need it. They weren’t in a flood zone.

An Act of God

Before the storm, our church had been praying about how to get into people’s homes in our community. The weekend Harvey hit was supposed to be our back-to-school kickoff event. We had planned to have bouncy houses for the kids, games, and lots of food to welcome people back to church from the long Texas summer. We were expecting a crowd, but because of Harvey, no one attended. We would come to find out, however, that God still answered our prayers.

The day after the water receded enough to make it to our church’s main campus, about 50 of us met in our darkened building—there was no electrical power—to chart a plan. Minutes later, we put it into action: People with pickup trucks immediately went to home-improvement stores and bought wheelbarrows, wet-dry vacuums, shovels, brooms, gloves, masks, pry bars, hammers, trash bags, bleach, and other supplies. Others went to stores and bought $100 gift cards. (That first day we bought $43,000 worth of $100 gift cards.) Then I sent an email to our church family and asked, “Did your house flood?” We immediately received more than 120 replies from people who said, “Yes! We flooded!”

I asked church family members who wanted to help to meet me on Friday morning to start gutting homes. Hundreds of volunteers showed up. We ventured into neighborhoods, sometimes passing National Guard checkpoints, and into homes still soaked with floodwater and began the process of clearing them out.

We would target a single home, but then would accept requests for help from neighbors and family members.

One of our teams was finishing work at a home when a worker saw a neighbor who was weeping. The elderly man was carrying items from his home to the curb. Our worker struck up a conversation with him and learned the man and his wife were struggling to gut their home themselves. Our team of volunteers jumped at the opportunity to help. And for the next two days, our team cleared and cleaned the couple’s home. Similar scenarios repeated again and again as our teams fanned out across our area.

Over the next few weeks (before mold set in and made it too dangerous for our volunteers), our church family gutted 173 homes. At an average savings of $13,500 per home, that means church volunteers saved homeowners more than $2.3 million. We’ve also passed out nearly $50,000 in gift cards to people with immediate needs and packaged about 60,000 meals. Our food pantry has seen a constant flow of people in need. The Lord provided a warehouse nearby at which we accept new furniture and appliances and then distribute to those in need. I could go on, but you get the idea: We’ve been busy. And honestly, we were getting tired. But, thankfully, the “big C” Church stepped up.

Big C to the Rescue

More than 30 churches (and hundreds of individuals from around the country) gave money to help us in our relief efforts. Churches from Dallas, Las Vegas, Ohio, California, Colorado, Kansas, and elsewhere sent teams of amazing people to help. Most of their work has been in the form of gutting homes. But that work has recently shifted to prepping homes for new drywall and flooring. This has been a monumental shift. When I got the call that trucks were unloading drywall at our warehouse, and that the first homes to be rebuilt were on the schedule, I almost cried. It was a sign of hope in a situation that once felt hopeless.

Our volunteers and visiting teams now go out and get homes ready for reconstruction: we clean them, spray anti-mold solution on the studs, install insulation, and make other preparations. A team of our professionals then install the drywall. The cost per home is more than $2,500, depending on the home’s size and the amount of drywall needed. But our church is covering the cost because of the generous contributions of churches and individuals who have given to our relief fund. The next step will be to help people with furniture and appliances.

My first words to our church family after the storm were these: “Starting with our own church and working outward, we’re going to help as many people as we can, with as much as we can, for as long as we can, and then we’re going to do more, because I want people to be able to say, ‘This flood was the best thing that ever happened to me, because it showed me that God is real and that he really cares about me!’” I said that in faith, not knowing how we were going to do it. But then God, by way of other churches, came through big time. And these people who have lost everything now have hope because of the “big C” Church!

Honestly, I’ve never been on the receiving end of help from other churches. We’ve always been the senders of money, people, and resources. This is new for us. But it’s been a great vantage point from which to view the amazing work of the church of Jesus in all her glory!

We were praying that our church family could “get into” people’s homes in our community. Little did we know we’d be in their homes helping to rebuild them. But God has brought such beauty out of this storm through his church. He always does.