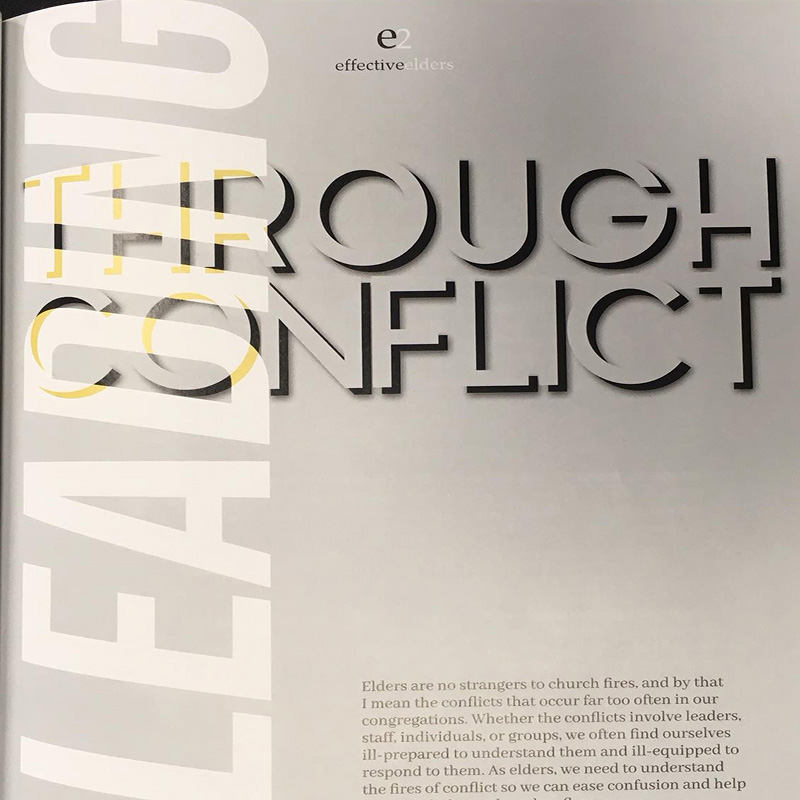 Elders are no strangers to church fires, and by that I mean the conflicts that occur far too often in our congregations. Whether the conflicts involve leaders, staff, individuals, or groups, we often find ourselves ill-prepared to understand them and ill-equipped to respond to them. As elders, we need to understand the fires of conflict so we can ease confusion and help extinguish them when they flare up.

Understanding Conflict in the Church

Here are some facts about church conflict.

Fires are inevitable. No church is immune to conflict, so be aware of it and alert for it. A change in the church will always result in a degree of resistance, which can escalate into open conflict. And since change is inevitable—whether it is intentional or unintentional—fires will also be inevitable.

Sometimes fires are necessary. Leaders can often manage conflict and turn it into constructive dialogue. It can be an opportunity to explore alternatives, forge a common perspective, and redress past wrongs. Conflict can help lead to a healthier future, but only when handled properly.

Fires grow in stages. Firefighters categorize fires with “alarm” levels (for instance, “a four-alarm fire”). Church conflict does the same, with alarm levels progressing from a simple difference of opinion all the way to an intractable, all-encompassing battle. As the conflict heats up, communication becomes distorted, and resolving the conflict is more difficult. Addressing conflict early is the key to resolving it.

People start fires. No matter how we label conflict (be it congregational, institutional, or organizational), it is always between people. Buildings don’t fight, but people fight about buildings. Programs don’t clash, but people clash over programs. Conflicts may start for different reasons, but people are always involved.

Redressing Conflict in the Church

Now let’s look at ways we can respond to church conflict.

Take preventative steps. Conflict may be inevitable, but we shouldn’t go out looking for it, and we should do our best not to inadvertently cause it. Conflict can usually be prevented with appropriate planning. For example, we all can think of an instance when a proposed change gave rise to conflict simply because of a poor communication strategy. If we take steps to appropriately introduce a change, and provide opportunity for dialogue about it, we usually can minimize the potential for conflict.

Deal with it! We cannot ignore a fire. We can’t just say, “It’ll burn out on its own.” (Maybe we could, but at what collateral cost?) Elders and other leaders must have the integrity and courage to address the matter at hand. Fires left to their own typically don’t burn out, they burn down.

Listen before speaking . . . or deciding. Act, don’t react. Before acting, gather information. Extract the facts from the opinions and “spin.” While perception often replaces reality, eventually reality brings people back to the facts. As elders, we should spend time listening to all the conflicting parties, even if we are a party in the disagreement. In conflict, the truth is usually the first item to be discarded and replaced with innuendo, suspicion, misinformation, or disinformation. Leaders must ascertain the facts, stand on them, and communicate them consistently.

Make a proportional response. Jesus called us to be “peacemakers” (Matthew 5:9). We should make sure our response doesn’t broaden the conflict. If the issue is with an individual or a group of people, we should limit our response by engaging only with those folks in face-to-face meetings. If the conflict has spread to the entire congregation, then a response to the entire congregation may be required. On some occasions, instituting the measures of church discipline may be required. The point is, don’t treat a grease fire like a five-alarm inferno. Likewise, don’t try to dowse an inferno with a hand-held fire extinguisher.

Address all the participants. When combatting a fire, especially a wildfire, firefighters must make sure to suppress all the fire’s sources and major outbreaks, even some minor ones, until it is containable and can be extinguished. (For more on this “fire tetrahedron,” read “Extinguishing Fires of Conflict,” by Walt Wilcoxson.) Church conflict requires a similar response. Elders need to connect and—depending on the circumstance—even confront the fire starters, those burned by the fire, and sometimes the congregation (depending on how far the conflict spreads).

Repent if necessary. We are all human and imperfect, even leaders in God’s kingdom. As leaders, we must act with integrity and transparency if we are, in fact, the cause of unnecessary conflict. Whether a leader has made an ill-informed decision or responded inappropriately to an existing conflict, the situation can be resolved only by admitting to the failure, thereby suppressing the fire.

Jim Estep serves as event director with e2: effective elders and as professor at large with Lincoln (Illinois) Christian University.