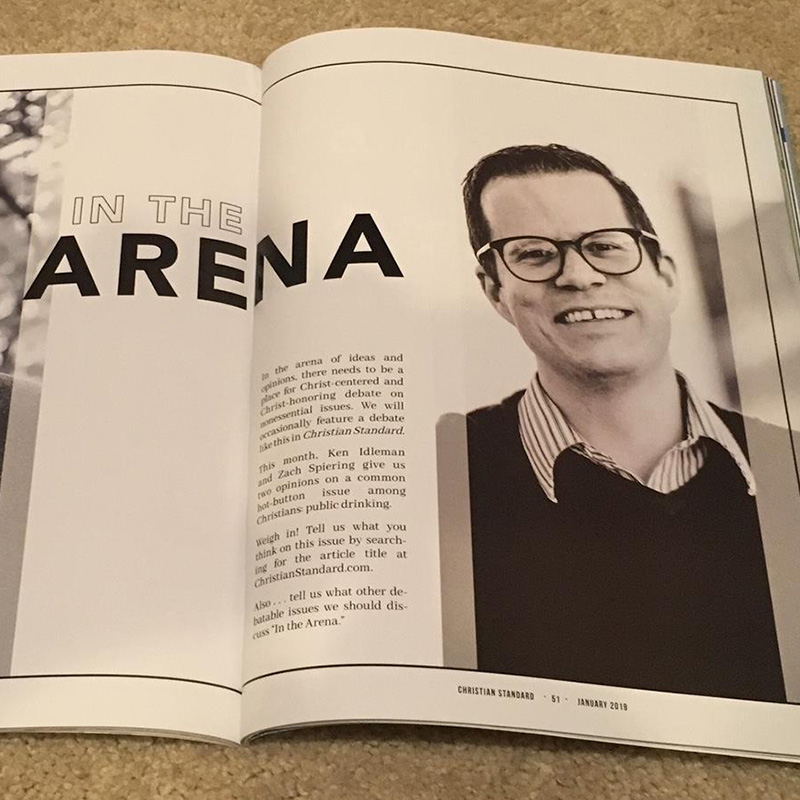 In the arena of ideas and opinions, we offer a place for Christ-centered and Christ-honoring debate on nonessential issues.

This month, Ken Idleman and Zach Spiering give us two opinions on a common hot-button issue among Christians: public drinking.

Tell us what you think on this issue by leaving a comment below. (Also . . . tell us what other debatable issues we should discuss “In the Arena.”)

During the time I taught at a Restoration Movement Bible college, I enjoyed the opportunities to work with wonderful, godly men and women and to play a role in shaping young minds for kingdom work. For me, getting to do those things was worth giving up a few of my freedoms, such as freedom to enjoy alcohol in moderation, something I have done for most of my adult life. I have my faults (as my wife can attest), but I have never been drunk or abused alcohol. Not one time. While I willingly submitted to the leadership of the college when I learned of their expectations, I do not believe the restriction on alcohol consumption had any positive value for our work or the cause of Christ.

Lest I be accused of petitioning merely for my own gratification, I should say that I voluntarily abstained from alcohol and pork for two and one-half years when I lived in a predominantly Muslim country. It was an important part of my Christian witness among a people who viewed these things as forbidden. I found it a joy to do so. But I now live among a people who generally embrace both pork and alcohol. Abstaining from alcohol no longer benefits my Christian witness, and the expectation placed on Christian leaders to abstain is a detriment to our collective testimony to the grace and freedom we have in Christ.

There is nothing inherently Christian about abstaining from alcohol, historically or biblically. Not only did nearly every person in Scripture drink wine, but they wrote about it in favorable terms, even lifting it to a sacred experience. Wine in its naturally fermented form “gladdens the human heart” (Psalm 104:15), and is a comfort to the suffering (Proverbs 31:6). Wine is a blessing that comes from honoring God (Proverbs 3:10); its absence is a sign of God’s wrath (Isaiah 24:7-11). It was also a part of the old covenant offerings to God (Numbers 15:7), and most critically, a part of the new covenant Communion meal. Jesus drank wine and commanded his disciples to do so, as well (Matthew 26:27). (This most certainly was fermented wine, as a reliable method for storing unfermented grape juice wasn’t invented for another 1,800 years.)

Throughout Christian history, consuming alcohol in moderation has been the accepted norm, from our Jewish roots and apostolic fathers through the Middle Ages; alcohol was essential to clean the body from contaminants in the water (1 Timothy 5:23). Reformers Martin Luther and John Calvin embraced the drinking of alcohol, as did our Puritan ancestors in America, who never equated abstinence with holiness. Even today, throughout the world, prohibition against alcohol consumption is much more closely associated with Islam than Christianity.

Complete abstinence from alcohol is a relatively recent phenomenon in Christianity. Methodists of the late 1700s were the earliest advocates, and it primarily was embraced by evangelical and fundamentalist groups in the American Midwest and South, and then exported by missionaries to India and sub-Saharan Africa.

The idea of forbidding alcohol took off in the late 19th century as America’s cities filled with people from around the world. Industrialization and rapid urbanization upset the delicate balance of society, throwing off many of the old social restraints. Cities became, for the first time in history, the violent frontier of society, the hotbed of vice and crime. It was the early evangelical progressives (a rather ironic term these days) who decided, in their compassion, not to blame the people or the inhuman industrial systems under which they labored for their lack of morality. Alcohol became the scapegoat, the easy fix to humanity’s problems. If America could just get rid of the drink, it was thought, it could get rid of violence, debauchery, and probably even poverty.

Prohibition—the formal outlawing of alcohol production and consumption in America—lasted from 1920 to 1933, and the concurrent rise in crime and vice proved, in historical terms, the folly of arguments demonizing alcohol. Banning alcohol would not rid evil from the hearts of people; only the work of God’s Spirit will do that. But among the faithful, the vilification of alcohol persisted. For more than 100 years, many American Christians have strived under the assumption that alcohol (not money) is the root of all kinds of evil.

The problem is not that many leaders in our movement abstain from alcohol. Discipline, in general, is dying in today’s Christian circles, and fasting is a lost art; I appreciate those who were willing to make sacrifices for holiness. God certainly honors those sacrifices made from love and devotion to him. The problem begins when leaders elevate these sacrifices to something beyond a personal decision, when they equate abstinence with Christlikeness, and when they pressure or force others to go along (1 Timothy 4:3, 4).

The common argument for Christian leaders to abstain from alcohol rests on the belief that they should exhibit the highest level of Christian character (a sentiment I agree with). Abstinence advocates also contend that drinking alcohol can be a stumbling block for some nonbelievers or new Christians. Therefore, it is argued, Christian leaders have a duty to avoid alcohol at all times so as not to chance causing others to stumble. This line of reasoning is often supported by Scriptures such as 1 Corinthians 8:9, though the hermeneutic is applied rather inconsistently. I have never heard anyone preach that Christian leaders should give up access to the Internet because of those who struggle with pornography, or give up all their money because of those who struggle with greed (and much better cases can be made for those).

My non-Christian acquaintances are understandably confused about the Christian position on alcohol. On the one hand, we teach that Jesus changed water into wine—really good wine apparently—and on the other, we advise Christians not to drink it. Nonbelievers do not see Christian abstinence from alcohol as beneficial to them.

When our nonbelieving friends hear from Christian leaders who wear their abstention on their sleeve, they do not feel that person is speaking out of love of them, but rather out of judgment. Such folks often become convinced of the lie that they must give up alcohol to come to Christ, or at the least, must eventually give it up if they want to progress in their faith.

Nonbelievers often accuse Christians of being judgmental, and sometimes the accusation is fair. We tend to define the Christian life by a list of prohibitions rather than as a life of freedom, which is how the New Testament describes it. Yes, our exercise of freedoms could be a stumbling block in some contexts, but Romans 14 makes it clear our judgment of those who exercise freedom can also be the stumbling block.

Max Lucado has been credited with saying, “I have never heard anyone say, ‘A beer makes me feel more Christlike.’” The logic of that statement is itself dubious—one could substitute “beer” for nearly anything and make the same claim. More importantly, guilting or shaming those who partake of God’s good gifts is inherently un-Christlike. It drives people away from God. And if we are willing to keep people away from God to preserve our moral high ground, then we have missed the gospel.

Our judgmental attitudes about alcohol can also hurt the weaker believers in our care. Like it or not, Christians are beginning to embrace alcohol consumption. According to a Barna article from 2017, 60 percent of practicing Christians in America report drinking at least occasionally.

Many Christians who drink are ashamed of it and believe they should hide their drinking from other Christians, or at least from their Christian leaders. Making these believers feel dirty or shameful for exercising their freedom will drive them into the margins and increase the possibility they will abuse alcohol. On what will drinking Christians model their habits? TV and movies? Binge-drinking parties at college? Or will they find a model in a Christian leader who teaches them to enjoy God’s good gifts with gratitude and moderation?

“But the fruit of the Spirit is love, joy, peace, patience, kindness, goodness, faithfulness, gentleness, self-control [i.e., temperance]; against such things there is no law” (Galatians 5:22, 23, English Standard Version). If we keep alcohol on the margins of the faith community, we only perpetuate legalism and judgment, and we fail to teach true temperance, the self-controlled life of following Jesus.

Zach Spiering resides in Joplin, Missouri, with his wife and three children. He is a teacher, writer, community organizer, and serves as an advocate for immigrants and the poor among the community.