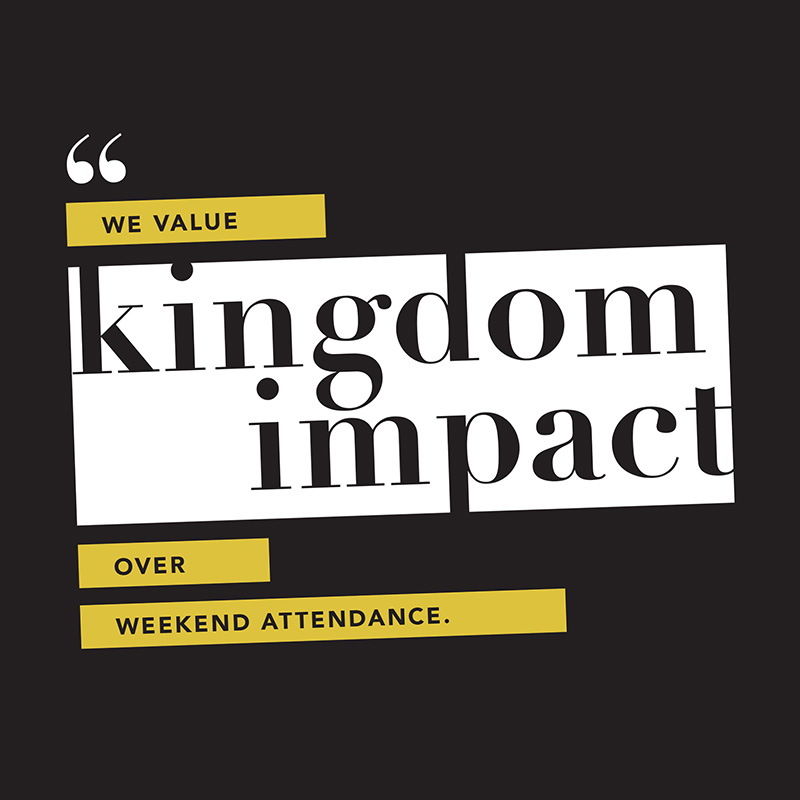 I was a stranger and you invited me in.

Outsiders consider people inside the church to be extreme and irrelevant.

That’s according to recent research about perceptions of Christianity in America conducted by Barna Group and its president David Kinnaman.

You may disagree with these descriptors of churchgoersextreme and irrelevantbut perception is reality to some degree. Outsiders either despise us or don’t care about us. We clearly have a PR problem on our hands.

The extremist label (see sidebar, “Extreme Views”) does not bother me, just as long as we are extreme for the same things as Jesus. But the perception that Christianity and Christians are irrelevant does bothers me. It keeps me up at night. Christians have been criticized for our beliefs throughout history. If we live counterculturally, we will always be criticized. However, we should never be criticized for our relevancy.

THE LOVE THE ‘VILLE STORY

Five years ago, because of our conviction that “nothing else matters,” Northeast Christian Church in Louisville, Kentucky, decided to do something about the church’s PR problem. We believed we could solve Christianity’s relevancy problem by being extreme . . . that is, extremely cross-shaped.

Since people outside the church generally have a negative view of us, we decided to change that byearning a reputation as the “Love the ‘Ville Church” in our city. Wouldn’t it be awesome, we thought, if that became our nickname in the mayor’s office, the public school system, and the homeless shelters, among refugee families, in prisons, and in every home?

Our preeminent goal becameredefining our church around the cross-shaped love of Jesus. Our extreme focus became Jesus’ great commands and cruciform example, for they both have proven relevancy! The empty tomb illuminated the cross’s potency over death while energizing future generations through the power of the resurrection. Nothing could possibly be more relevant!

We’ve seen that to be true. In five years,

The changes we’ve made aren’t the types of things typically recommended by church growth gurus. We don’t set goals to “triple in size” or “add 1,000 people” or “plant five campuses.” Rather, our emphasis is simple”Earn a reputation for living cross-shaped lives!” The rest takes care of itself.

We have shifted our budget, ministries, and mission in massive ways. We value kingdom impact over weekend attendance. We have grown 10 to 20 percent per year over the last several years . . . I think. I’m not certain about the percentage because we just don’t watch attendance numbers that closely. Instead, our approach prioritizes values like self-sacrifice, servanthood, generosity, relationships, story, and faithfulness; these types of things are hard to quantify on a metrics dashboard. This relational approach takes the long view rather than employing quick-church-growth gimmicks.

Our approach requires patience. Sadly, many churches that ask our advice will try our approach for a season, but quickly will lose patience and gravitate back to their old ways. Some churches that revert back then dismiss our approach as “social gospel” and “lacking evangelistic fervor.”

Our approach has unleashed an evangelistic fervor in our church because it has made evangelism accessible to everyone. We believe evangelism starts with something as simple as loving others in cross-shaped ways, and who can’t do that? Evangelism has become a dirty word today; it rings of gospel tracts, awkward confrontations, and telling folks, “Hell is hot!” A proselytizing approach is guilt-driven and turns folks off. The targets of such an approach feel like projects, not people.

At a conference, I once heard a church leader say, “Ten percent of your church has the gift of evangelism. Tap into it!” I thought to myself, I didn’t know evangelism was an option for the other 90 percent. It isn’t. I think that conference speaker was really saying this: “Only 10 percent of your church is weird enough to walk around and ask people, ‘Do you know where you’re going when you die?'” At Northeast, we don’t encourage that approach because it lacks the emotional intelligence and relational currency it takes to have a serious conversation about Jesus with a nonbeliever. At Northeast, our unique approach to evangelism is this: We always walk the walk, and then we talk the talk when the opportunity is right.

Northeast wants to make a social impact on our communityextremely sobut without abandoning our call to evangelism and orthodox truth. This Love the ‘Ville framework goes beyond doing a few serve projects or being nice. It’s not a “serve day,” it’s a “serve-DNA.” It is the operating system in every department of our church. This is our spiritual formation system, our discipleship model, our evangelism strategy, curricular philosophy, justice program, and part of how we express our worship. This is what we do. Our dream is to be a movement of people who live the Love the ‘Ville lifestyle. Our rally cry is, “We unleash Jesus’ loveeverybody, every day, everywhere!”

“Call Northeast Christian.” That’s what the Mayor’s Office told an elderly couple from an impoverished neighborhood when they called for help last October. They needed help clearing fallen debris from their backyard to forestall eviction. Six organizations had ignored their calls for help. The government was their last hope, they thought, but our civic leaders had another idea: “Call Northeast Christian.”

That’s the vision! Five years ago, we knew the American church had a PR problem. Lifelong Christians were walking away from church and our kids weren’t even considering it. To them, the church was boring, judgmental, irrelevant, abusive, extreme, or focused on all the wrong things. Rather than complaining about the problem, we decided to be the solution and earn a reputation as the Love the ‘Ville Church. Today, we have captured the attention of a major American city. We are the cutting edge of compassion in Compassionate City. As we like to say at Northeast, Jesus is why.

I invite you to join us in this journey. We are five years old and have much to learn. We have not yet gone through our rocky teenage years! But we have to get this right. While the American church is neither growing nor held in high esteem, it is the most important institution in our country.

God has called preachers and ministers to the most important work on this planet . . . more important than work performed by Apple and Google.

The mission of Christian leaders is more important than that of Amazon or Nike.

Ask yourselfall you young students, church planters, and emerging leaders whose hearts blaze with Holy Spirit fire to see revival in this countryten billion years from now, what will remain: the church of Jesus or the government of the United States? The answer is obvious.

Tyler McKenzie is lead pastor at Louisville’s Northeast Christian Church, better known as “the Love the ‘Ville Church.” To find out more or join them in this movement, email them at contact.us@necchurch.org.

Some of the more vocal critics of Christians and Christianity accuse us of holding extreme views. But perhaps they should look in the mirror.

In their recent book, Good Faith: Being a Christian When Society Thinks You’re Irrelevant and Extreme, David Kinnaman and Gabe Lyons found Christianity’s critics (skeptics) hold some rather extreme views of their own:

Critics of Christianity may not fight for religious truth, but they do fight for causes, politicians, policies, and values they find important. They protest. They attempt to convert others. They give money. They read literature in public, and perhaps even hand it out. They attend rallies, meetings, and gatherings. They leave high-paying positions for jobs with more “meaning.” They are “extreme” by their own definition.

Christian leaders have said for years, “America’s problem is moral relativism.” But polarization in our culture proves people believe there is right and wrong, absolute truth and untruth, and they’re willing to fight for it!