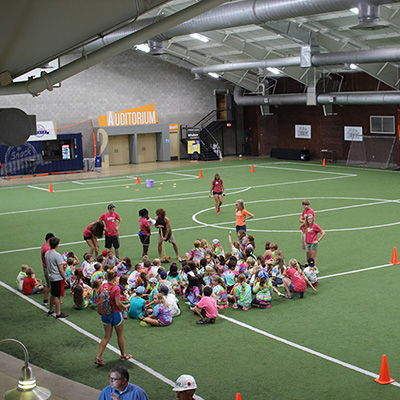 By Justin Horey and Jennifer Johnson

2|42 Community Church (pronounced “Two Forty-Two”) didn’t mind being a portable church in its early years. In fact, lead pastor David Dummitt liked being portable. He found that the weekly set-up and tear-down made it easy to involve men, who sometimes struggle to find their place in a new church. Moreover, the lack of a building allowed 2|42 to invest more money into ministry and community outreach.

During that time, Dummitt said, the number one question he heard from other pastors was, “When are you going to build?” Dummitt and his team didn’t want to spend $10 million or more on a facility that, in his words, “would be used a few hours per week.” Instead, they asked themselves, “When we build something, could we give that building as a gift—the largest gift we’ve ever given—to our community?”

The city of Brighton, Michigan, doesn’t have a community center or a YMCA, so 2|42 bought an old tennis and racquetball facility and developed plans to convert it into a community center. After purchasing the facility, 2|42 put up a sign outside that read, “Coming Soon: You Decide.” The sign invited neighbors and passersby to text or e-mail suggestions for what the building could be.

Through this process, 2|42 uncovered three needs in its town: food, art, and sports. With those needs in mind, 2|42 built a facility it calls “The Commons.” As Dummitt explained, 2|42 Community Church takes a backseat to other activities during the week and acts like a tenant at The Commons on the weekend. The church owns the building, but it is designed to address community needs first and church needs second. As a result, those entering the building through the main entrance first see an indoor soccer field where the lobby or vestibule might normally be.

Today, The Commons is home to a school for the arts, where nearly 300 students learn music, dance, cartooning, and culinary arts. The facility houses a CrossFit gym, basketball and volleyball courts, and a seven-day-a-week café (similar to a Panera Bread) complete with a three-story playscape.

Dummitt described The Commons as “a community center that has a church—not the other way around.”

2|42 opened its second Commons location on Easter Sunday in Ann Arbor, a college town about 20 miles away. Both the similarities and differences between the two campuses show how the campuses share the church’s DNA while adapting to local contexts.

The Ann Arbor campus features a design that takes a more creative and artistic approach. It features an urban sensibility, and its focus on connecting with Christ and with others both locally and globally is extended into its 2|42 Kids area. Here, children learn about Jesus in a city-themed environment, reflecting how the interdependence of the many people in a city represents our interconnection in the body of Christ.

2|42 has been one of Outreach magazine’s fastest-growing churches for the past four years, and Dummitt credits the building for much of its growth. He said no matter how many campuses 2|42 Community Church opens, “I’ll never build a church building. I will only build more community centers.”