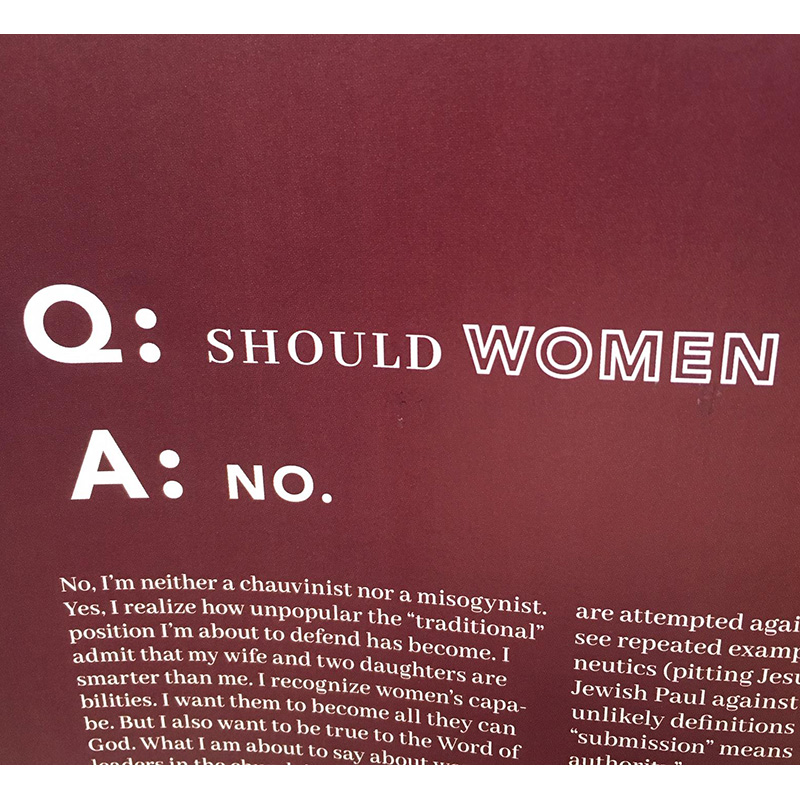 No, I’m neither a chauvinist nor a misogynist. Yes, I realize how unpopular the “traditional” position I’m about to defend has become. I admit that my wife and two daughters are smarter than me. I recognize women’s capabilities. I want them to become all they can be. But I also want to be true to the Word of God. What I am about to say about women leaders in the church is simply my best effort to be faithful to God and his design for men, women, family, and the church.

I must admit, here at the start, my disappointment with how many invalid arguments are attempted against the position I hold. I see repeated examples of dangerous hermeneutics (pitting Jesus against Paul or the Jewish Paul against the Christian Paul); unlikely definitions (“head” means “source,” “submission” means “consensus,” “have authority” means “usurp authority,” “speak” means “gossip” or “create a disturbance,” “be silent” means “don’t argue”); unwarranted culturalizing (Paul’s commands are only because women in Corinth and Ephesus weren’t educated or capable); and the ludicrous claim that submission is an admission of inferiority. Let’s be more honest.

There are two extreme positions about women’s roles in the church, and I reject both of them. The first extreme is that women have the right (even duty) to do anything that men do in the church (egalitarianism). That viewpoint contends women should be denied no leadership position (including elder or preacher) merely on the basis of their gender. This opinion is based on passages such as Galatians 3:28 (“There is neither male nor female . . . in Christ Jesus”*); Acts 2:17 (both sexes are gifted by the Holy Spirit); 1 Corinthians 11:11, 12 (male and female are interdependent and equal); 1 Peter 2:9 (all Christians are “priests”); etc.

People who hold this position argue that gender distinctions have been removed. In partial reply, I contend that Galatians 3:28 is clearly speaking of inherent equality in Christ as heirs of the benefits of salvation. Another apostle says the same thing in 1 Peter 3:7, that a husband is to “show [his wife] honor as a fellow heir of the grace of life.” The apostle said this after spending the six previous verses telling the wife to be submissive to her husband.

The other extreme I reject is heirarchicalism, the view that women are never to be speakers, teachers, or leaders in any religious matter (some think in any matter whatsoever). Rather, they should always be passive followers and restrict their activities primarily (or only) to domestic concerns. The chief support for this position comes from 1 Corinthians 14:33-35 and 1 Timothy 2:11-15. We will look at these two passages below, as they are the chief verses for supporting my position, as well. However, I agree with the majority of commentators on these two passages that they primarily forbid women from being the authoritative spokespersons to the assembled church. It is not legitimate, in my opinion, to extend those prohibitions to all times, places, and circumstances.

The Roles of Women in Ministry

People hold several positions between these two extremes, but I have concluded the best position is this: Women’s ministries for the kingdom are primarily informal and private rather than formal and public. Let’s examine what the Bible says.

Women ought not speak in the public assembly of the church but should be silent (1 Corinthians 14:34, 35). Most translations connect verse 33b with verses 34 and 35 so that it means, “As in all the churches of the saints . . . the women are to keep silent in the churches . . .” (emphasis mine); the command is not for Corinth only, but for all churches, without distinction, regardless of the capability of the women.

There were prophetesses in the Corinthian church (1 Corinthians 11:5), but they were to be silent (14:35) in the assembly, “not permitted to speak” (14:34), since it would be “improper” (14:35; aischros, literally, “shameful, ugly”) for them to speak. Evidently these prophetesses could speak in private settings, but, even then, had to keep their heads covered (11:5, 10—a sign of submission to the male authorities in Greek culture). Paul was careful to state this wasn’t simply his opinion; rather, “the things which I write to you are the Lord’s commandment” (14:37).

No woman is ever pictured as publicly preaching in the New Testament—or, for that matter, in the Old Testament. Miriam, a prophetess, led the women of Israel in dancing and singing (Exodus 15:20, 21). Deborah, a prophetess, held private consultations with “the sons of Israel” when they came to her for advice (Judges 4:5). Huldah, a prophetess, gave the insights of God regarding Judah’s future to several representatives of King Josiah (2 Kings 22:14-20; 2 Chronicles 34:22-28).

Women ought not teach in the public assembly of the church, but should learn (1 Timothy 2:11, 12; cf. 1 Corinthians 14:35). No woman is ever pictured as publicly teaching in the New Testament (or, again, in the Old).

There is no indication in Scripture that these bans on public speaking and teaching in the assembly are culturally based. In 1 Timothy 2, two reasons are given, neither of which is cultural: the priority of Adam in creation (v. 13), and the priority of “the woman” (Eve) in deception (v. 14). The reasons go back to creation and the fall. It is seldom noted that the word first in verse 13 is not an adverb, telling when Adam was created (before Eve), but an adjective; Adam was formed “as first” or “to be first” as a matter of position.

No woman is ever pictured as an apostle or an elder (the authority positions) in the New Testament. Jesus had the perfect opportunity to show he wanted women to take positions of leadership by appointing one as an apostle, but he didn’t. Elders are specifically to be “the husband of one wife,” or, a “one-woman man” (aner means male; 1 Timothy 3:2; Titus 1:6). The elders in the Jerusalem church were all “brethren” (Acts 15:23). There is no biblical example where this prohibition of female leadership is set aside.

Though Miriam was a prophetess, when she tried to usurp authority over Moses, God struck her with leprosy and caused her to “bear her shame” for seven days (Numbers 12:1-15). Though Deborah was the prophet, it was Barak, a man, who led other men into battle against Sisera (Judges 4:14).

Wider application of the above Scriptures suggest to me that women ought not give an offering or Communion meditation, and perhaps not even lead the congregation in singing/worship if they are going to (as they should) give little lessons or sermonettes between the songs. And 1 Timothy 2:8 suggests that it is God’s will for men (andras, male persons) to lead every congregation in public prayer.

The Contributions of Women in Ministry

As I said above, women are super capable to serve God in a multitude of informal and private ministries. We must challenge them to assess their gifts, ascertain the church’s needs, and find places to serve. Women can even serve in the public assemblies. Nothing prohibits women from singing or playing an instrument as part of a music ministry (Ephesians 5:19; Colossians 3:16; Ezra 2:65; Nehemiah 7:67); there were male and female singers in the temple services). Though Old Testament women could not serve as priests, they could serve in the tabernacle (Exodus 38:8; cf. Anna in Luke 2:36-38)—they served in positions of service, not authority. Similarly, women can usher, greet, pass offering and Communion trays, etc., in our assemblies.

Just as the Bible writers laud the service ministries of Priscilla, Phoebe, Dorcas, Euodia, Syntyche, Lydia, several Marys, and dozens of other women, churches today should openly affirm the contributions made to the kingdom by women. Women typically work harder than men and are more reliable. Their unique skills must be utilized. Older women are commanded to teach the younger women in Titus 2:3-5, though, admittedly, more on their practical duties as wives than on doctrinal matters. But one woman did, in fact, teach a man on doctrinal matters without any hint of disapproval in the text—Aquila and Priscilla taught Apollos “the way of God more accurately” (Acts 18:26).

I believe women should be employed as “deaconesses” (1 Timothy 3:8-11; Romans 16:1, 2) and leaders of certain ministry teams, especially those involving other women and benevolent ministries to care for the needy, abused, sick, elderly, widows, orphans, etc. (1 Timothy 5:10; Acts 9:36-42). Women should, like Priscilla, be engaged in evangelism. There are scores of ways women can serve God, but only a few where they should not.

*All Scripture quotations are from the New American Standard Bible.