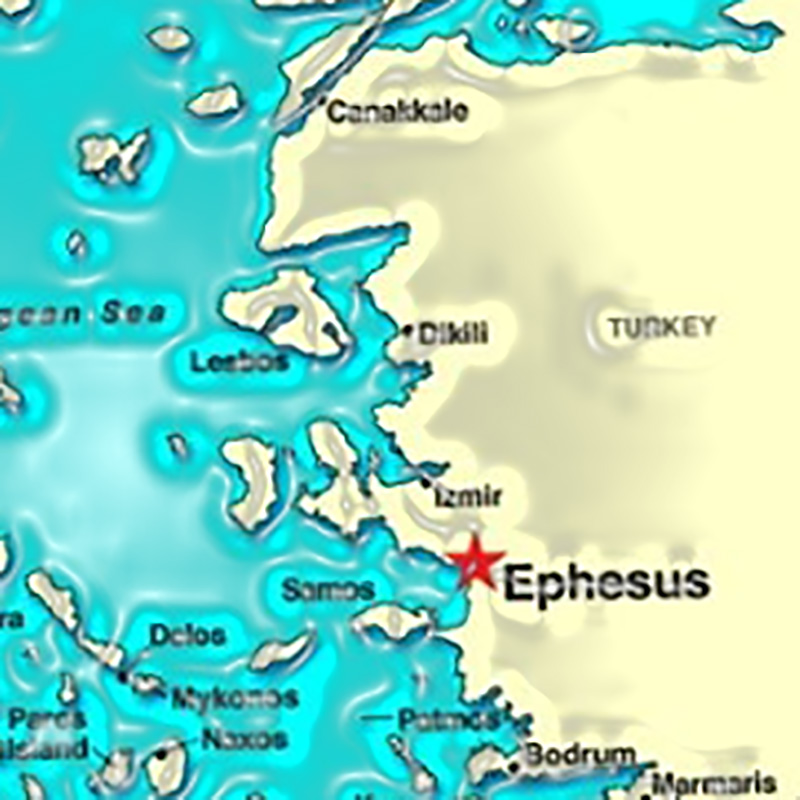 The Ephesian church was a first-century megachurch that had everything, and then, by all historical accounts, lost everything.

Ephesus was the sort of city Paul liked to target: a hub of culture and a place of notoriety. He knew if he could plant the gospel in Ephesian “soil,” it would spread. Ephesus was a major commercial center—three trade highways ran through it—it was a port town, and it was tourist hub. One of the seven wonders of the world, the temple to the goddess Artemis, was located there. Some estimate the city’s population at a quarter-million people—massive for the time.

Acts 19 gives a glimpse of the efforts Paul made at establishing a church there. In fact, during his time in Ephesus, Paul seems supercharged unlike any time in his ministry. The apostle preached boldly for months, built a large following, and held daily discussions in the lecture hall of the pagan philosopher Tyrannus. He performed “extraordinary miracles.” After more than two years of ministering in Ephesus, many confessed their sins, total revival broke out, the gospel spread indiscriminately, and the church exploded.

Eventually, though, the local economy began to suffer, and Paul became the scapegoat. Local tradespeople and craftspeople—makers of Artemis souvenirs and knickknacks—saw Paul as a threat to their greatest attraction. They started a riot and shouted, “Great is Artemis of the Ephesians!” Hundreds of people rushed to the local theater and continued chanting. Confusion and anger reigned as people shouted conflicting things. (Who doesn’t love a good riot?)

In this moment, we encounter the Paul I love most. (I’ll embellish on what is detailed briefly in Acts 19:30, 31).

Paul put up a fight to appear onstage. (“I want to go in there! LET! ME! IN!”) His friends restrained him. (“But thousands of people are gathered here!” Paul implored. “Give me that mic! Let’s give them Jesus!”)

But Paul’s buddies didn’t budge. And after three years of dynamic ministry, Paul moved on. Still, Ephesus always held a special place in his heart. These were Paul’s “glory days.”

THE UNDOING OF EPHESUS

Paul delivered an emotional speech to the Ephesian elders as he was leaving. Later, he wrote three more letters to Christians in the city: Ephesians and 1-2 Timothy. Then, a generation later, a fourth document was written to the church in the city by One far greater than Paul:

I know your works, your toil and your patient endurance. I know that you cannot tolerate evildoers; you have tested those who claim to be apostles but are not, and have found them to be false. I also know that you are enduring patiently and bearing up for the sake of my name, and that you have not grown weary (Revelation 2:2, 3; New Revised Standard Version).

The letter starts well for Ephesus. Jesus lauded them for four things: effort (“you are hard workers”), endurance (“you endure cultural opposition”), doctrine (“you are protectors of truth”), and energy (“you are tireless in commitment”).

“And yet,” Jesus said, “you’re missing something essential. Something so essential if you don’t repent—lampstand gone—I can no longer call you a church”:

But I have this against you, that you have abandoned the love you had at first. Remember then from what you have fallen; repent, and do the works you did at first. If not, I will come to you and remove your lampstand from its place, unless you repent (Revelation 2:4, 5; NRSV).

The church at Ephesus lost their first love. But how?

It wasn’t a lack of Scripture. The Ephesians had more Scripture directed at them than any other church.

It wasn’t a lack of top leadership. The Ephesians had Paul around longer than any other church. After Paul they had leaders like Apollos, Priscilla, Aquila, and Timothy. Church tradition tells us John and Mary, the mother of Jesus, basically retired there. There were superstars in their pulpits and pews every week.

Ephesus was a world-famous, Bible-believing megachurch with perhaps the greatest lineage of preachers and leaders ever. They were known for their effort, endurance, doctrine, and energy. Yet Jesus had had enough. He was ready to extinguish their flame.

THE LOSS OF OUR FIRST LOVE

What happened? Why had the Christians at Ephesus abandoned their first love?

Think back to when you experienced first love as a Christian. For me, it was like a volcanic eruption. It was uncontrollable and indiscriminate love for God, his church, and all people—Christians and non-Christians. I was in college when it all got very real. I repented and decided to give my life to Jesus and to ministry. I spent hours every morning reading, memorizing, praying, and singing. I couldn’t help but tell all my friends about Jesus. I found a nearby church—small, traditional, older—filled with people who loved me . . . and I loved them back. What a season that was! It was a season of “first love.”

Did the Ephesian church lose that sort of love? More pointedly, have you lost your “first love” for God? I would suggest two strategies for rekindling and sustaining that first love.

1. Keep it simple. Jesus made it simple. (See Matthew 22:37-40.) Let’s keep it simple, but not shallow. As Christians grow, they develop a desire to wade deeper into the theological depths of God. This should be encouraged. But here is the problem: In the complexity of understanding God, it’s easy to lose sight of the simplicity of following Jesus.

2. Bridge the generational gap. Within one generation of Christians in Ephesus, their children and children’s children had lost their first love. Nurturing a love for God in rising generations should be a preeminent priority for every congregation.

Achieving this involves a mutual responsibility between young and old, so I have a distinct challenge for each group.

First, to the more mature . . . lead! We need you to be the spiritual mothers and fathers for the young and new. I’ve observed an interesting trend in our youth-worshipping culture. The old are forgotten in the name of “reaching the next generation.” This should never be so.

There’s been a movement to reach millennials in the American church. The millennial generation (those born in the 1980s into the late 1990s) is abandoning faith like none that has come before, and their generation Z successors (born in the late 1990s into the 2010s) will be even more lost. The church must attack this problem. Most of the more mature Christians I know respond in one of two ways. Some get on board, and some get angry. The angry ones inevitably take their ball and go start their own “What about me?” churches that meet their needs, address their issues, and—let’s be honest—play their music at their volume levels.

Second, to the younger . . . listen! Listen and submit to the wisdom, experience, truth, and love our spiritual elders have to offer. If you are too “enlightened,” prideful, or fragile to submit to the influence and leadership of those older and wiser, you need to repent. Nothing frustrates me as when young folks say, “I want mentors. I want older folks to pour into me!” Then, when it happens, those same young folks mutter, “Sheesh! They are so judgmental, intolerant, and senile! Can you believe she said that to me?”

Look, if that’s who you are and where you want to stay, there’s a millennial church out there that will stroke your ego, never hold you accountable, disintegrate orthodox biblical faith, and tell you to follow your hearts. Before you stir up disunity in the body, you should probably go. But if you stay, be prepared to listen . . . and allow God to do something for you that, deep down, you actually want.

THE UNDOING OF THE AMERICAN CHURCH

You do not lose your first love in an instant. No, it occurs in a slow drift, one day at a time. If you determine you have lost it, Jesus has a solution.

Remember then from what you have fallen; repent, and do the works you did at first. If not, I will come to you and remove your lampstand from its place, unless you repent.

Jesus declares there is an inseparable connection between sustaining the love you had at first and doing the works you did at first. Begin to take those first steps again, even if they are small. Small steps add up.

Jesus tells us the stakes are high and the punishments are dire. What do you do when a leader stops leading? You remove her. What about when a player stops playing? You remove him. When a worker stops working, you remove him. What does Jesus do when a church stops loving? He removes it! Jesus won’t endorse churches that don’t maintain their first love.

Without love, nothing else matters. And maybe that’s part of the problem in the American church. Have we lost the profound simplicity of following Jesus in cross-shaped love? Have we abandoned the spiritual family to target demographics and affinities? Whether we have or haven’t, repentance is always the best response. Let’s go back to our first love and the works we did at first.