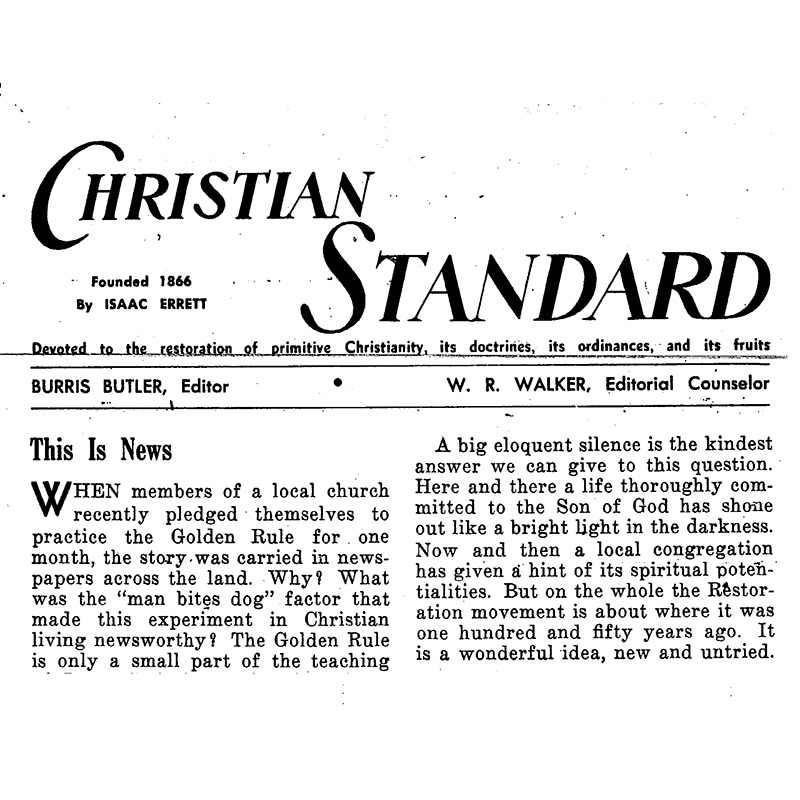 In his editorial of February 20, 1954 — 65 years ago — Christian Standard editor Burris Butler shared a rather harsh assessment with readers.

When members of a local church recently pledged themselves to practice the Golden Rule for one month, the story was carried in newspapers across the land. Why? What was the “man bites dog” factor that made this experiment in Christian living noteworthy? The Golden Rule is only a small part of the teaching of Jesus. It is just a fraction of the Sermon on the Mount. And a church, any church, is presumably made up of people who are committed to Jesus Christ as Saviour and Lord and who have undertaken to live by His rule of life. But the truth of the matter is that the church seldom takes Jesus Christ seriously. And when it does, even for a month at a time, that is news.

Herein lies the heart of this whole business of restoring New Testament Christianity. The church of the New Testament took Jesus Christ seriously. The life of each individual Christian was wholly committed to Jesus Christ as Saviour and Lord. Because He had risen from the dead, He was acknowledged to be the Son of God with all authority in heaven and on earth. His spiritual kingdom was entered by a transformation of life so complete that the change was spoken of as being born again. The one so born again was “a new creature [or creation] in Christ Jesus.” Each one so lived according to the rule of Christ and His apostles that he looked forward with joyous anticipation to that day when he should see Him face to face.

A big eloquent silence is the kindest answer we can give to this question. Here and there a life thoroughly committed to the Son of God has shone out like a bright light in the darkness. Now and then a local congregation has given a hint of its spiritual potentialities. But on the whole the Restoration movement is about where it was one hundred and fifty years ago. It is a wonderful idea, new and untried.

I confess to having but a limited knowledge of Walter Scott, so when I saw his name mentioned in the editorial, I immediately concluded Butler was referring to Scott’s famous five-finger exercise. Upon reading more about Scott—a tremendous article from 1945 that I’ll share next week—I concluded I likely was missing the big picture.

Be that as it may, and to whet your appetite for next week, I’ll share Scott’s unique invention—a simple illustration for the gospel plan of salvation, based on Acts 2:38, that he devised in the late 1820s.

As an evangelist, Scott would enter a town near the end of the day, head to the schoolyard, and gather a crowd of children. He would point to the fingers on his hand, working from thumb to pinkie, and say: “Faith, repentance, baptism, remission of sins, gift of the Holy Spirit.” He would repeat this a few times, and then have the children repeat it back to him.

When the children had learned it, he would instruct them to share it with their parents, and also to tell them he would be speaking that night at the schoolhouse. The evening gatherings typically were quite large.

Scott’s approach was unique and his preaching was direct, powerful, and effective. (More about Scott next week.)