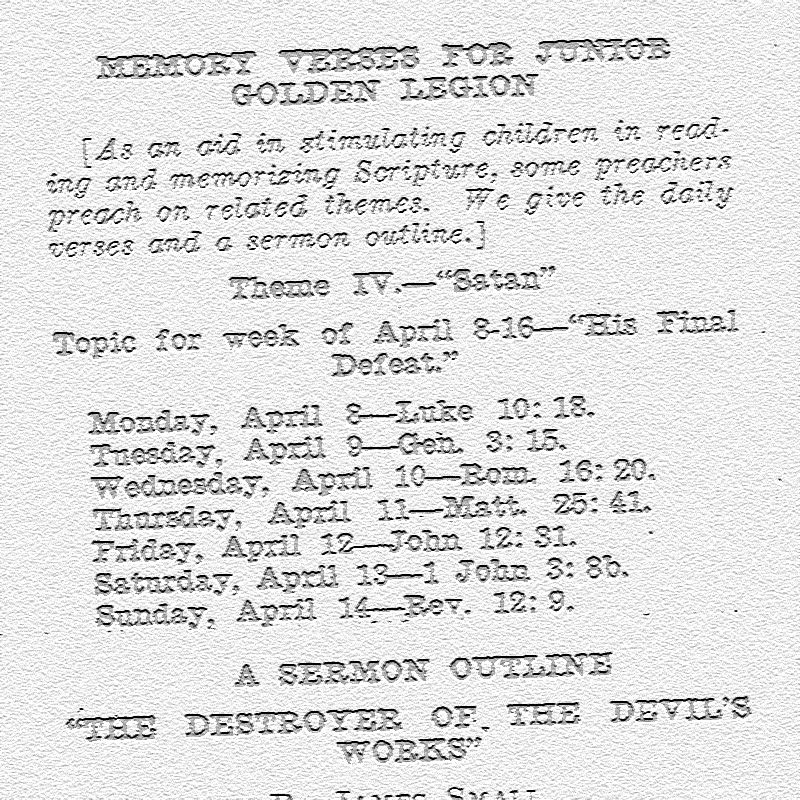 A comprehensive indexing of Christian Standard upon our magazine’s 100th anniversary in 1966 failed to chronicle a recurring one-page feature called “Vitamins Club”—a hodgepodge of sermon outlines, memory verse listings, random poetry, original and submitted items, and also snippets gleaned from other sources. All of these had one thing in common: brevity.

DEFINITION OF A DENOMINATION

A. E. Sterrett, of Leipsic, O., sends the following definition of a denomination, that he says he has never seen in print. Its advantage is that while it is a proper definition, it is at the same time a pretty fair argument for unity in the Christian field:

“The term ‘denomination’ as applied to religious bodies both indicates and implies that there is a parent body from which the denomination sprang and from which it differs in at least some of its fundamental teaching.”

“I never knew, my Lord,
The beauty of Thy Word;
Its rich and hidden deeps;
The wonder that it keeps
Within the seeker’s reach
Until I came to teach.
Thy Word anew I sought;
In teaching, I am taught!”

AN ANECDOTE OF ALEXANDER CAMPBELL

My grandfather, J. B. Tandy, lived to be eighty-four years old, scarcely knowing any of the ills and ailments of the body during that long span of years. He stood about six feet four in his stocking feet and had the muscles of a giant. When he was a boy, living on White’s Run in Carroll County [Ky.], his father sent him to mill one day. Alexander Campbell was preaching at an old church just outside of Ghent. The boy sat on the steps and listened to him, and when the invitation was given to join, he walked up barefooted in his one-suspender cottonade britches and made the confession. When he got home and told his father about it, the old gentleman nearly tore down the porch. He was one of the old-time Baptists, and he told his son to get his duds and get off of his place. In a short time my grandfather appeared with his bundle, but by his side was his mother, also with a carpet sack.

“Where are you going?” said the old man to his wife.

“I am going with my son,” she said, “for when you drive my son away for confessing Jesus, I go with him, and you can get somebody else to take care of your home!”

That was a different matter, and the old gentleman made haste to make peace all around.

“Adam—The Man Who Gave Us All a Start.”

“Moses—The Man Who Gave Us Our Liberties.”

“Joseph—The Man Who Would Not Be Corrupted.”

“Samson—The Man Who Was Shorn of His Great Power.”

“Jacob—The Crooked Man Who Was Made Straight.”

“Gideon—The Man Who Got Going.”

“AND HE BEGAN TO WASH THE DISCIPLES’ FEET“

You can work and give for others, without a grudge or frown,
When your toil and sacrifices with gratitude they crown;

But you’ll need some real religion, with no thought of least renown,
When you give yourself in service to the man who lets you down.

So many of us seem to think that if we have plenty we shall somehow know what to do with it. As a matter of fact more people go on the rocks because of having too much than too little. It is important that we know how to abound.

We are concerned with the matter of getting ahead. But what do we mean by it? What do we mean to get ahead of? Or whom do we mean to get ahead of? For many of us it is a matter of financial security. We mean to keep ahead of the wolf of poverty. We are dreadfully afraid of being poor. Such people could hardly understand St. Francis of Assisi, who deliberately took the vow of poverty, or Gandhi giving up a lucrative position. Gandhi said that he chose poverty that he might better serve his fellow man. So many of us are not concerned to serve our fellow men. We are more desirous to get ahead of our fellow men, or, at least, to keep up with our more prosperous neighbors.

It would be tragic to get ahead financially if we do not also get ahead spiritually. Some of us have stopped in our spiritual growth. We are so much concerned with getting ahead financially that we have lost interest in matters that pertain to richness of life. With our prosperity let us have a return of loyalty to Christ and the church.

The clerk had just completed a quarter century of faithful service with a big business concern. At the end of the day the boss handed him a big envelope inscribed, “In token of this memorable date.” The clerk opened the envelope and inside it he found a photograph of his employer.

“Well, what do you think of my gift to you in recognition of your devoted service?” the proprietor asked.

“It’s just like you, was the courteous reploy.” Bee-Hive.