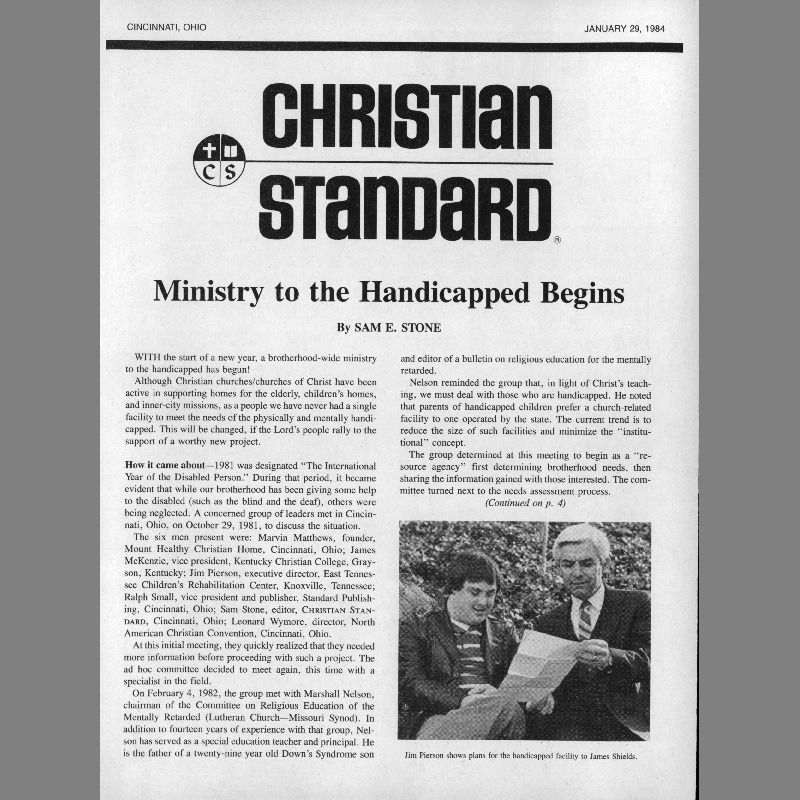 On Jan. 29, 1984, Sam E. Stone provided an answer to a question he had asked readers more than two years earlier: “Just what is the church doing to meet some of the enormous needs disabled people are facing?”

The answer came in the form of a front-page story in Christian Standard entitled, “Ministry to the Handicapped Begins.”

That article—as you’ll read—details the start of the Christian Foundation for the Handicapped, which continues to thrive, but under a new name, Ability Ministry. (Read more about Ability Ministry—including an important part of its origin story that Sam doesn’t share here—in an article by president Ryan Wolfe on page 62 of the March issue of Christian Standard.)

Ministry to the Handicapped Begins

With the start of the new year, a brotherhood-wide ministry to the handicapped has begun!

Although Christian churches/churches of Christ have been active in supporting homes for the elderly, children’s homes, and inner-city missions, as a people we have never had a single facility to meet the needs of the physically and mentally handicapped. This will be changed, if the Lord’s people rally to the support of a worthy new project.

How it came about—1981 was designated “The International Year of the Disabled Person.” During that period, it became evident that while our brotherhood has been giving some help to the disabled (such as the blind and the deaf), others were being neglected. A concerned group of leaders met in Cincinnati, Ohio, on October 29, 1981, to discuss the situation.

At this initial meeting, they quickly realized they needed more information before proceeding with such a project. The ad hoc committee decided to meet again, this time with a specialist in the field.

On February 4, 1982, the group met with Marshall Nelson, chairman of the Committee on Religious Education of the Mentally Retarded (Lutheran Church—Missouri Synod). . . .

[Nelson] noted that parents of handicapped children prefer a church-related facility to one operated by the state. . . .

The group determined at this meeting to begin as a “resource agency” first determining brotherhood needs, then sharing the information gained with those interested. The committee turned next to the needs assessment process.

What are the needs?—At the 1982 North American Christian Convention in Kansas City, two important follow-up meetings were held. The committee first enlisted the aid of our Bible college presidents. . . . These men quickly agreed to publish in their school publications the questionnaire that was being prepared for The Lookout and Christian Standard. The survey was intended to learn how many handicapped individuals and families might be helped.

The other was an open meeting dealing with needs of the handicapped. A responsive group of parents, ministers, professionals, and others concerned with the handicapped filled the meeting room. . . .

Those present expressed a number of needs: a quality residential facility to serve persons whose families are no longer able to care for them; support for the families of handicapped people through the local church; vocational training; the removal of barriers; educational programs; seminars; curriculum.

In the fall of 1982, the questionnaires were distributed. More than 450 replies were received. These clearly demonstrated the great void in our brotherhood’s provision for the handicapped. . . .

By the following May, the committee was prepared to meet again and formulate a plan of action.

New organization begins—On May 18, 1983, in the library of Standard Publishing Company, the committee reconvened [and] . . . determined that the number one priority need was for a residential facility—a place that could provide good care for the mentally and physically handicapped when their families are no longer able to care for them (or earlier, if desired).

At this meeting, the ad hoc committee formed itself into the Christian Church Foundation for the Handicapped. Soon afterward the group was chartered in Kentucky as a non-profit organization. . . .

The six committee members each . . . pledged themselves to contact a number of the leading brotherhood churches to enlist their support in this pioneer venture. The group recognized from the first that selecting the proper individual to lead this new ministry was essential. Prayerful  discussion of that subject was on the agenda of each meeting.

During the early summer, five congregations were personally contacted. . . . Each church was asked for an initial commitment of $10,000 and a person from the congregation to serve on the board. All five churches agreed enthusiastically! They are:

. . . At the group’s meeting on July 27, 1983, the group voted unanimously to invite Jim Pierson to serve as executive director of the new organization. He indicated that he would give the opportunity prayerful consideration. . . . The group felt that [Pierson] was the best prepared man in the brotherhood for the job. With the BA from Milligan College and the MA from the University of Tennessee, he has done post-graduate work in special education and speech pathology at UT. He serves as a lecturer at Johnson Bible College and Milligan College and as consultant to Standard Publishing.

On October 18, 1983, the board met again, this time at the Greater Cincinnati airport. Details of the contract drawn up by the executive committee and offered to Jim Pierson were approved. Next Pierson outlined the type of program he would plan to implement.

A ministry of love—The new facility will be a community serving the mentally retarded and the physically handicapped. The residents will be treated as individuals, loved by God and those working with them. An adequate tract of land, properly located, will be secured first. On it will be built a multipurpose building designed to meet the needs of the program, along with housing facilities for at least three categories of residents—children, young adults, and older adults. The facility will not look like “an institution,” but a home.

The committee concluded that, given Jim Pierson’s years of experience and contacts in the Knoxville, Tennessee, area that vicinity would make an ideal setting for the foundation’s office and a first facility. . . .

In accepting the invitation to serve as executive director of the Christian Church Foundation for the Handicapped, Jim Pierson explained five concepts he considered in making the decision.

Christians want to do God’s will!

My response was based on my reaction to these concepts. As a Christian, who loves persons with handicaps and their families, who feels a burden to meet their needs, who want his gifts—enhanced by training and experience—to be used, and who desires to do God’s will, I humbly accept the offer. I am deeply grateful for the confidence the incorporating members expressed both through this offer and their personal words of encouragement.

The article concluded by saying Jim Pierson would begin full-time with the Foundation on Feb. 1, 1984, and outlined his plans for the first several months on the job. The editorial in that issue invited “active participation” from our readers, including an “initial gift” to help make it happen.

In our March 2019 issue, Ryan Wolfe briefly described the events that followed soon after: Under Pierson’s leadership, “the first resident moved into Riverwood Christian Community in Louisville, Tennessee, in August 1986. The ministry grew, and a second home was added to the Riverwood campus in 1993.”

In January 2009, CCFH welcomed Gary Spangler as its new executive director. Under his leadership, the organization was renamed the Christian Churches Disability Ministry. In 2017, Ryan Wolfe was hired as president and the ministry’s name was changed to Ability Ministry.

“The name change came with a new focus and a total ministry rebrand,” writes Wolfe,

Click here and go to page 62 to read Wolfe’s article.