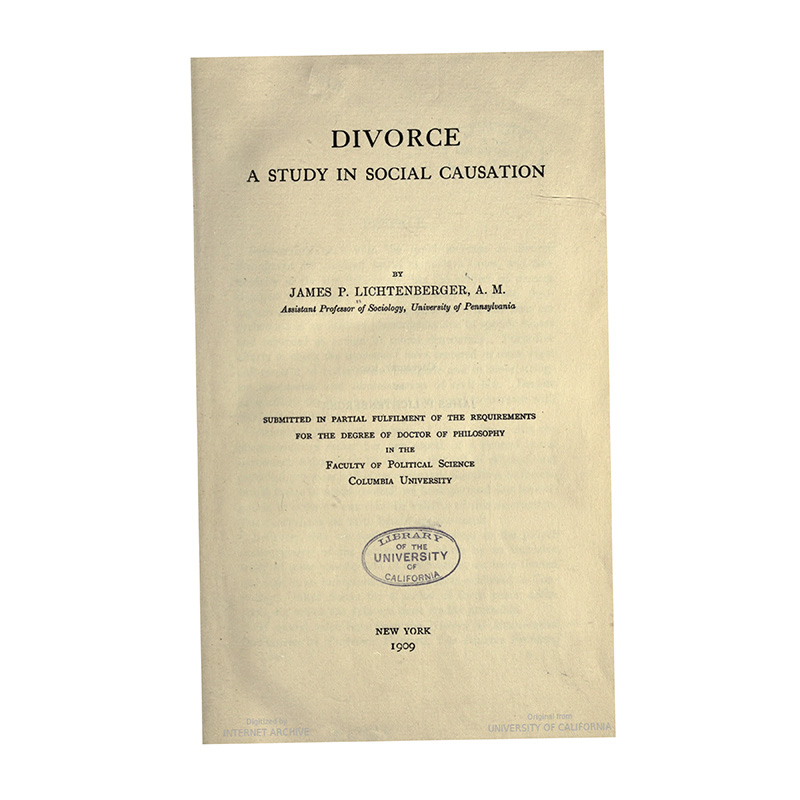 This editorial from 1910 is—more than anything else—a comparison and commentary on the career choices of Disciples of Christ minister turned sociologist James P. Lichtenberger. The editorial also shares a rather amusing anecdote.

Lichtenberger (1870—1953), a native of Illinois, preached in churches from 1896 to 1908 before earning a doctorate in philosophy from Columbia University in 1909, according to the website of the American Sociological Association (www.asanet.org). Lichtenberger served as a professor with the University of Pennsylvania the balance of his career, and in 1922 was president of the American Sociological Society (later changed to Association).

Lichtenberger penned Divorce: A Study in Social Causation in 1909, which serves as the news “hook” for this Christian Standard editorial from 1910. The editorial also references Lichtenberger’s service with a church in Canton, Illinois, from 1896—99.

Prof. James P. Lichtenberger has written a monograph on divorce, which appears as one of the publications of Columbia University. It bears the sub-title of “A Study in Social Causation.” Its appearance, and the brief review of its contents we have had opportunity to make, suggests what may be considered by some a curious comparison.

We knew a young preacher once, who, recognizing that his field, a thrifty but indifferent county-seat town in Illinois, needed a stirring up, announced three special sermons to be delivered on three successive Sunday evenings. The first, on “Rum, Rags and Ruin,” filled the little church from wall to wall. The next, on “The Popular Sins of Modern Society,” brought out twice as many people as could be housed. The third, on “The Sins of ?” (giving name of the place), was delivered in the largest hall obtainable, and the overflow gave every church in the city a record-breaking attendance. People came twelve miles to hear that sermon. It had been prepared with care, and submitted to the prosecuting attorney for criticism before delivery. The mayor was there, and all the city officials, with as many citizens prominent and otherwise, as could be packed in. There was a rattling of bones long dry. No great transformation resulted; in fact, the most evident effect of the series was that the preacher went to another field somewhat sooner than, otherwise, he might have done. But he had his innings, and the shoddy aristocracy of that calloused little city saw themselves in true perspective for once. The “gallon house” at the city limits, the illicit liquor and gambling joint, the card table, the dance, and all prevalent social evils, received each its portion in due season. And the young man had a “remedy” to propose. With all the force of his magnetic personality he urged the gospel of Jesus Christ and the clean life it makes possible as the better way. Twelve years have not sufficed to relegate the memory of that man who stood up and had his say even in the defiance of the “elders that rule well.” Men in that town still smile and chuckle with appreciation when the matter is mentioned.

But what we started out to say is that, though a dozen years of “social and economic evolution” have passed, bringing changes little dreamed of then, we some way have a conviction that the amateurish young preacher, bold and belligerent as he was, came closer to a solution of the problems before him than has the learned Doctor with his monograph. We could even find it in our heart to regret that one so well equipped to oppose the evils that prey upon our poor humanity should prefer to write brochures on “social causation,” “economic development” and “ethical culture.” Jim Lichtenberger, with a bold, blunt gospel message and implicit faith in its power, was a more potent factor in the world of real things than is Dr. James P. Lichtenberger, with no message but philosophic disquisition on economic evolution as a factor in social causation.