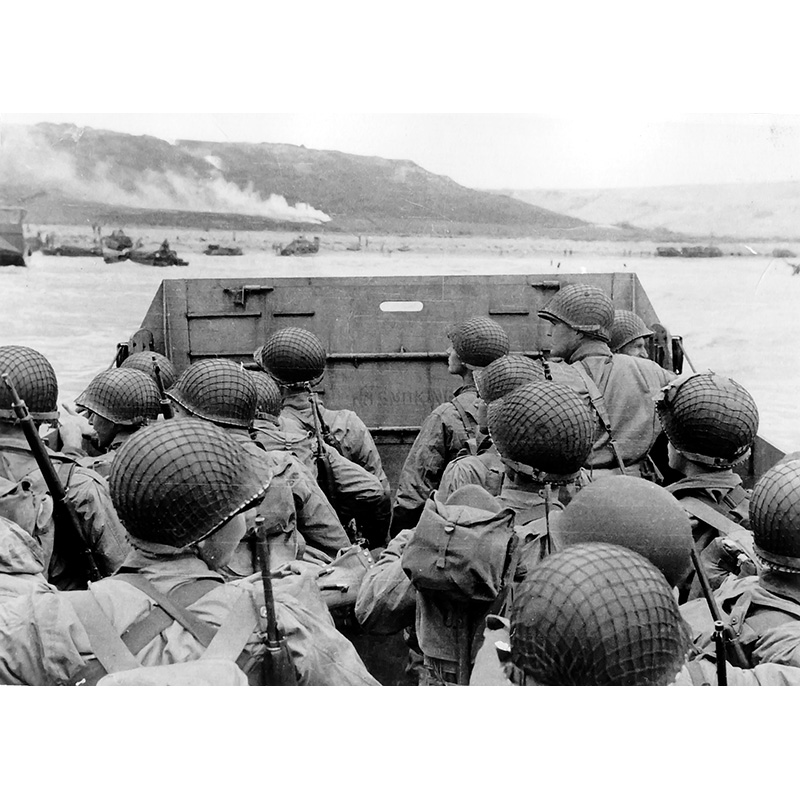 In the late 1990s on into the early 2000s, the Christian Standard office would occasionally receive phone calls that would start something like this: “Hello, Jim. This is Chaplain Colonel Barber” (spoken with a hint of a Southern twang).

During our conversations, George Russell Barber would share recollections of his service in the Army and to God during World War II, of landing on Omaha Beach with American forces on D-Day, of sharing a can of Spam with legendary war correspondent Ernie Pyle a day later, of helping select the site for the U.S. Cemetery overlooking the beach, and of serving with the troops as they fought their way across Europe.

In honor of Memorial Day and the upcoming 75th anniversary of the D-Day invasion (June 6), here’s an article that Barber shared with Christian Standard back on Nov. 11, 1944.

And, as a treat, after this column, we’ll share more biographical material about Barber, who died in 2004.

“Our Chaplains Are Saying—”

In England I joined the great U. S. Infantry Division. Chaplain Enos L. Harvey and I preached the gospel Sunday after Sunday as we prepared our men for their part in the invasion.

Through a telephone conversation with Greg Carmichel, whose name had been handed to me in Canada, we connected with the church of Christ in Bournemouth. There we had a grand fellowship and I was privileged to speak to the church on Lord’s Day evenings shortly before the invasion. I asked the church there for their prayers for our division in the coming show, for I knew the part our division had to play.

With Charles Payne, the chairman of the British Home Missions Committee, we discussed the state of our work in the British Isles. There we have 175 churches and a great need for more.

Came time for the invasion. On the Lord’s Day, June 4, 1944, we had the privilege to speak to around one thousand men in services on eight invasion ships. “Movietone” took pictures of one of the services on the deck of an LST [Landing Ship Tank]. The Navy gave every co-operation, furnishing me with an LSVP ship [he likely meant LCVP: Landing Craft Vehicle Personnel, commonly called a “Higgins Boat”] to arrange for the services and then to hold these services on Sunday. This ship was at my disposal for three days. Thus many had the gospel of Christ preached to them on the eve of the greatest invasion in history.

We crossed the channel with many other ships. It was “D Day.” In thirty minutes we would all go over the side into the LSVP’s for that three-mile ride in a rough sea to the “Atlantic wall.” I stood on the bridge of the ship, and with an electric loud-speaker I called to the whole ship and announced that we would have prayer. While the great ships around us were shelling the shore every man on our ship bowed his head and we led the ship in prayer to God, who alone had our destiny in His hands. Over the side we went. We saw landing craft blown to bits before our eyes, but our LSVP’s landed safely. We went up about one hundred yards from the water to some fox holes. There we spent the night—“D night”—with planes overhead, German artillery shelling us and mines blowing up by the hundreds all around. That night was spent in prayer and in giving words of encouragement to men all around our fox hole. Thus we landed. God was good, for not a man from our ship was killed. I believe it was in answer to prayer.

In the campaign all across France and Belgium our division has been out in front. God has blessed us in that our losses have been light in view of the position we occupied.

Since landing on “D Day” we have held at least four services every Sunday, and many times five or six. Congregations have varied from six men to 525. Most services were held outside under a tree, but some few have been in theater buildings, town halls, schoolhouses, tents and sheds. Wherever we were, though, was holy ground, for God was there and the gospel was preached.

We have found no work of the Restoration movement in France or Belgium. France has about two million Protestants and Belgium has around one hundred thousand. Again, here is a great need. With the bringing to Europe of freedom and democracy there should come the free and democratic New Testament Christianity that it has been our privilege to spread in America. Now is an opportune time in Europe. Let the church of Christ rise up and evangelize! This is the hour to lead in the destiny of Europe!

So we are still here on the firing line for the Lord, dodging the enemy shells. We pray for victory and peace soon. Will you, too, pray?

George Russell Barber was born in Buckhead, Ga., in 1914, grew up in Atlanta, and graduated from Cincinnati Bible College in 1936. He married Helen Koester of Cincinnati the same day he graduated, and they soon moved to California, where he found a job as minister at Park Avenue Christian Church in Montebello.

There are several articles about Barber online, but I will share excerpts from two—an obituary/feature story, “George Barber, 90; D-Day Troops’ Chaplain,” by Jon Thurber of the Los Angeles Times (Dec. 26, 2004), and “Remembering the Last Surviving D-Day Chaplain,” by Mark Ellis of the God Reports website (June 6, 2011). Both of these articles include much information Barber shared with me, but which I would not have accurately remembered.

First, from the L.A. Times story:

Barber was one of four chaplains at Omaha Beach with the Army’s 1st Infantry Division.

American troops encountered the fiercest resistance of any Allied force on D-day from German gun emplacements on the cliffs overlooking the beach. According to his son [Don], Barber spent a bloody and chaotic day ministering to the wounded and dying, then dug a foxhole near the cliffs and bedded down for the night.

At dawn, the carnage on the beach and in the water was readily apparent. More than 1,500 GIs had been killed. Barber spent much of [the] next few days readying the dead for burial and helping select the site for the U.S. cemetery overlooking the beach, his son said.

Barber continued with his combat ministry through much of the fiercest fighting in Europe. . . .

Responding to a call for military chaplains in early 1941, Barber joined the horse cavalry and was stationed on the U.S.–Mexico border on Dec. 7, when Japan’s attack on Pearl Harbor thrust the country into the war.

He transferred and spent much of the war in England, eventually joining the U.S. forces preparing for the invasion of Europe. . . .

He returned to Park Avenue Christian Church after World War II but was recalled to active duty, this time with the Air Force, during the Korean War. After 2 1/2 years of service, he resumed his post with his congregation in Montebello, where he served until 1956. From there he became pastor at Pico Rivera Christian Church, a post he held for 17 years.

He stayed in the Air Force Reserve until 1969, serving through much of the Vietnam War at March Air Force Base. He retired from the ministry in the early 1970s.

And now the God Reports article, written by a man who knew Barber:

“We were all afraid,” said Col. Barber, as the men came ashore June 6, 1944, amidst a hail of bullets and fiery explosions. “If a man says he’s not afraid, he’s lying—but we had our faith.”

. . . “On the Sunday before D-Day I held services on 11 different ships in Weymouth Harbor for thousands and thousands of soldiers,” he said. “I gave away a lot of pocket Gideon’s Bibles—there are no atheists in foxholes.”

On the fateful morning of the invasion, he went over the side of his ship on a rope ladder into a flat-bottomed landing craft that held 30 soldiers [and landed on the beach about 30 minutes later]. . . .

Without hesitation, Barber rushed to the sides of the wounded. “I talked to as many as I could and prayed with them. I said, ‘Trust in God.’” As men died in his arms he recited John 14: “Do not let your hearts be troubled. Trust in God; trust also in me. In my Father’s house are many mansions . . .”

“Men were being killed all around me,” Barber said. “We were all trying to dodge the bullets. Thank God I wasn’t hit.” Miraculously, none of the four chaplains landing on the Normandy Beaches that day were killed, according to Barber.

“The Lord and me got that foxhole pretty deep.”

Unable to sleep, Barber crouched in his crude shelter amidst the storm of battle. Through the night, he stared up at a frightening display. “I watched the sky lit up by tracer bullets. Every fifth bullet is a tracer bullet, so you can see it go up and come down.”

“The next morning I got over that cliff and I met Ernie Pyle, the famous war correspondent for Stars and Stripes,” Barber recalled. “We split a can of Spam together.” Later that day, the two men walked Omaha Beach together, past the bodies of over 1,500 who had fallen in battle. . . .

Chaplain Barber also survived the Battle of the Bulge, and was at the Remagen Bridge spanning the Rhine River immediately before it collapsed. Later, he and his men visited a concentration camp at Nordhausen, Germany. Before Allied troops arrived, Germans crowded 200 Jewish men into a building and set it afire. No one survived the flames. “War is ugly. War is hell,” Barber said.

Barber shared other stories with me. He spoke of a conversation with Tom Hanks, the actor who starred in Saving Private Ryan, a movie revered for its accurate depiction of the D-Day landing. They met at the opening of the National D-Day Museum in New Orleans in 2000. Barber gave the opening prayer at the dedication. (The museum is now called the National World War II Museum.)

And I’ll never forget Chaplain Colonel Barber’s humorous comment to me . . . shared more than once: “I love reading the Christian Standard,” he’d say. “In fact, sometimes I think I enjoy reading it more than the Bible.”

We both would laugh.

A big “thank-you” to Jim Lloyd, director of library services at Cincinnati Christian University, for tracking down and sharing the 1936 graduation photo of George Russell Barber.