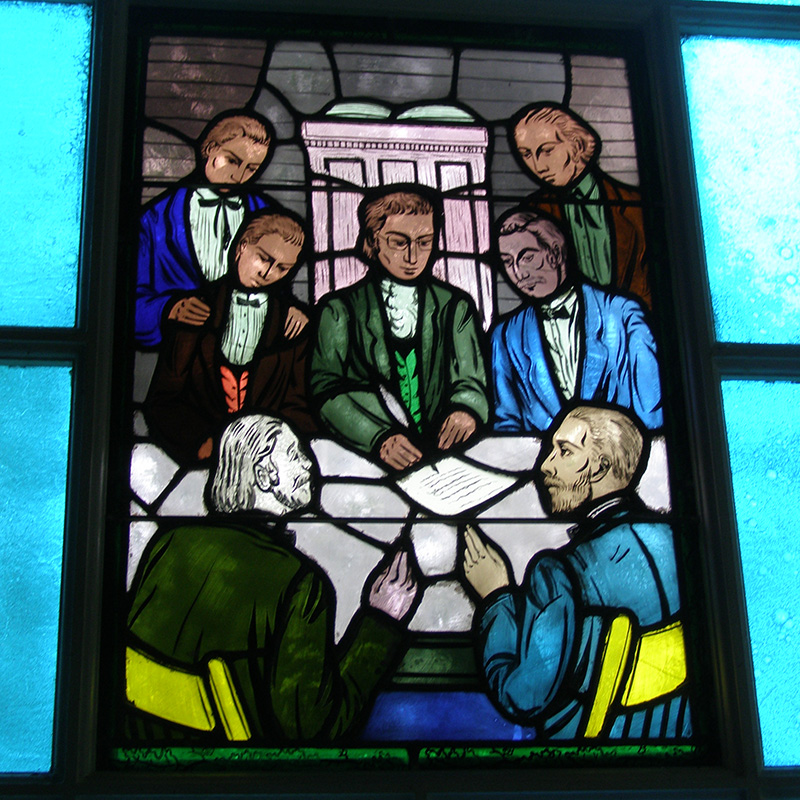 We continue this week with the third installment of Frederick D. Kershner’s biographical study of Restoration Movement father Barton W. Stone from 1940. (Part one and part two are available here.)

There was a group of young ministers, of which Stone was probably the center, which reacted against the high Calvinism of their fathers after the Cane Ridge revival. Stone, McNemar, Marshall, and three or four others withdrew and organized the Springfield Presbytery. They published an apology, some part of which was comprehended in the autobiography of Barton W. Stone. The apology itself is very rare. We have in our possession at Butler University a copy of the original document renouncing the jurisdiction of the synod of Kentucky, and containing a compendious view of the Gospels. It is signed by Robert Marshall, John Dunlavy, Richard McNemar, Barton W. Stone and John Thompson. The title date is 1804. . . .

The apology is rather a treatise. It bears as its motto, “Search the Scriptures,” but the plan of the work would scarcely be called exegetical. It starts out with a section on human depravity, continues with a study of regeneration, goes on to an analysis of the gospel, and later passes to a discussion of faith. . . The second part of the pamphlet is entitled “Remarks on the Confession of Faith,” and aroused the greatest opposition on the part of the orthodox Presbyterians of the time.

On the whole, the apology is a rather conservative document judged by present-day Presbyterian standards. . . . Stone’s work must be judged by the circumstances which called it forth. Upon the basis of such an appraisal it was, no doubt, radical enough; at any rate, the majority of Presbyterians of that day thought so.

STONE and his companions were styled “New Light,” for some not altogether intelligible reason. . . .

What the reformers wanted was a broader field for evangelism than the old confession seemed to afford. They were, and never hesitated about acknowledging the fact, disciples of the Cane Ridge revival. Stone later in life modified his earlier view of evangelism, but he never ceased to regard Cane Ridge as a manifestation of the divine grace and blessing. He admits that some of the enormous number who were converted were later guilty of backsliding, but he says that on the whole the results were salutary. The religion of most of the converts stuck and wrought a complete transformation in the moral tone of the Kentucky frontier. Barton Stone never tried to reproduce Cane Ridge, but he always had a good word to say for it.

THE Springfield Presbytery took its name from a sparsely settled center some distance north of Cincinnati. Its tenets were a modified Calvinism with an emphasis upon evangelism and an urgent insistence upon the necessity for preaching the gospel. With long and painful labor Stone worked out his own theory of the atonement in place of the Anselmic version of the confession of faith. He did not believe that the cross was intended to reconcile God to man, but, on the contrary, that its purpose was to reconcile man to God.

It is interesting to observe that there is nothing said about baptism in these early discussions of Stone and his associates, or, at least, that that there is next to nothing said. Obviously the subject did not loom large in their thinking. Later on, the whole group were immersed, and whatever points of contact existed between them and the affusionist followers of O’Kelly, in North Carolina, became very much strained. . . . He [Stone] became an immersionist before he met the Campbells, and after his union with the latter, which occurred many years before his death, there can be no question at all as to where he stood. It is true, nevertheless, that he practically ignores baptism during what may be styled his Cane Ridge career. . . .

The Springfield Presbytery lasted only about a year. The new reformers traveled rapidly after they burned their bridges behind them. Affirming the New Testament as their only rule of faith and practice, they were hard put to discover the Springfield Presbytery within its pages. As a consequence they determined to dissolve this un-Scriptural organization in the interest of a more complete adherence to the will of Christ. They published the “Last Will and Testament of the Springfield Presbytery,” in which in delightfully whimsical and humorous fashion they repudiated the institution which they themselves had created. [Click here to read the document.]

One marvels at the sparkling and clever style of the last will and testament. Obviously, whoever composed it was not the same author as the man who wrote the turgid and unilluminating apology. The tradition which has come down from these days is to the effect that Robert Marshall drafted both documents, but this seems impossible. . . . Whether Stone wrote either or both of the documents remains also obscure. The last will and testament of the Springfield Presbytery is the most brilliant literary production in the early history of the disciples. It is a gem of the first order, a veritable oasis in the desert of dreary theological speculation.

The bantering sarcasm which marked the dissolution of the Springfield Presbytery incensed Stone’s enemies still further against him. They were now assured that he was insincere and shallow, or otherwise he would not have dared to give even a touch of humor to his religion. From the earliest times wit . . . was always repudiated by the theologians. . . . Wit, humor, clarity, simplicity and rationality have usually been regarded as dangerous and damnable characteristics when brought into the service of theology. The last will and testament was a brilliant performance, but its very brilliancy contributed not a little to undermining the reputation of the Cane Ridge reformers as true and genuine theologians.

The dissolution of the Springfield Presbytery was to be paralleled a quarter of a century later by the dissolution of the Mahoning Association, under the leadership of [Alexander] Campbell and [Walter] Scott. In both instances the bold and drastic action taken made for the immediate success of the people who did the dissolving. Like Luther burning the Papal Bull, these later reformers attracted followers by the very iconoclasm of their action. It was good advertising, for one thing, to burn one’s bridges behind him, and both Stone and Scott speedily discovered that fact. The “Christians,” as Stone and his associated were styled, multiplied all over Kentucky, Indiana and Ohio, and even spread into other states. Had they remained in the Presbyterian Church, even under the dubious form of an independent presbytery, their growth would have been hampered and slowed up in many particulars. By coming out boldly and announcing themselves as “New Testament Christians only,” they cut the ground floor from under their competitors and swept the field before them.

THE Presbyterians anathematized the new heresy, and it required many years before they could feel comfortable toward it, just as the Baptists cordially disliked Scott and his associates because they took too many of their churches away from them. When the Stone and Campbell parties united, as they did later at Lexington, most of the orthodox regarded the union as the combination of two bands of Ishmaelites who could probably do more damage, though not much more, under the new arrangement than under the old.

THE main charge leveled against Stone in Kentucky was that he was an Arian [believing the Son is not of the same substance as the Father] or Unitarian and, therefore, quite beyond the pale of evangelical Christianity. The feeling on this matter was quite intense at the beginning of the nineteenth century. . . .

Stone, like Scott, later on emphasized the Lordship and divinity of Christ more than any other preachers of their day. The centrality of Christ was, in fact, the very essence of their teaching. . . . The idea that Jesus was truly God and that He represented the most complete and full embodiment of the divine nature which it is possible for men to understand and receive was always a cardinal tenet of their doctrine. The Christians under Stone and the disciples under Scott gave Jesus Christ higher place in their affections and in their teachings than was given to Him by any other communion, Protestant or Catholic.

To speak of such men as Unitarians in the ordinary sense of the word is, of course, quite absurd. The average Unitarian of the present day regards Jesus as most decidedly human, and frequently places Him below Gautama or Socrates. Not so the Restoration fathers. . . . The essential deity which to them meant the absolute authority of Jesus was the heart of their preaching. . . .

We will conclude this four-part series next week. 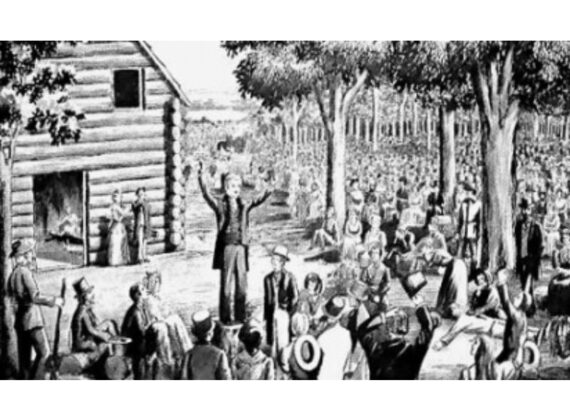