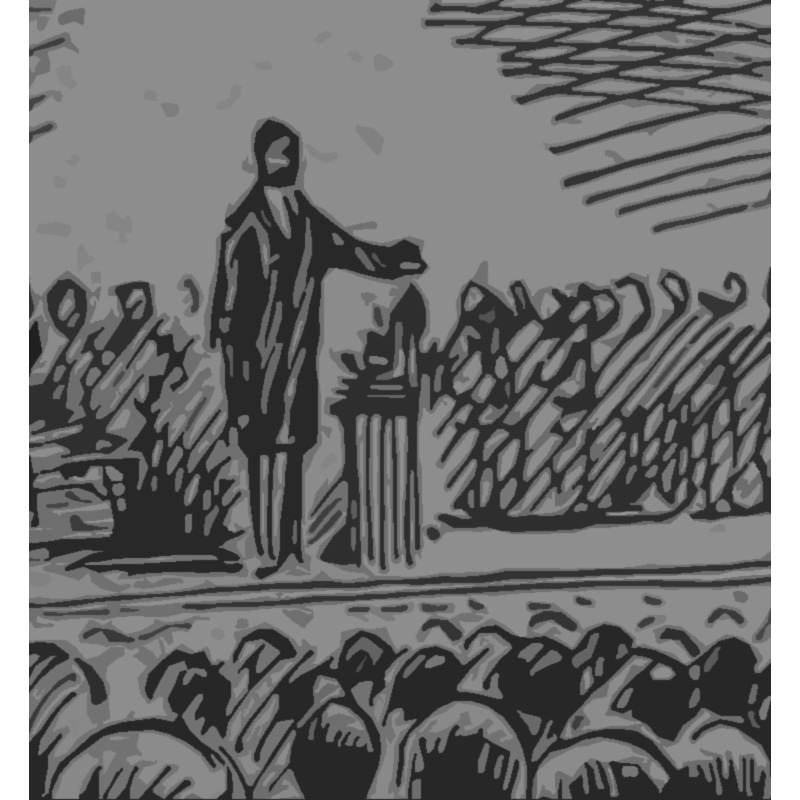 Buried toward the back of the Oct. 12, 1889, issue was a column by an unknown preacher who shared short recollections of his inadequacies and failings as a young evangelist. This column is several things: raw, uneven, humorous, painful, perceptive, and poignant.

Reminiscences from a Young Preacher’s Experience

Yes, I remember quite a number of the firstlies in my ministry. My first sermon was in a new, unfinished, country meetinghouse, painted without, but rough within; the studding, joist and rafters were bare. The benches were slabs from the saw-mill, supported on wooden pins, called legs. My text was in Isaiah. I had notes, but got lost on thirdly. Owing to my confusion, another preacher closed the thing up for me. I never tried it in that house again. My next sermon was about six hundred miles off in a new district where my former failure was unknown. I got a better start the next time, and preached fifteen minutes. My next trouble was to get through within an hour. I found it about as hard to close out a sermon as it was to open up one; but my hardest task was to say something worthy of a patient, forbearing audience within an hour’s talk.

I got into a protracted meeting very early in my ministry. The result was eighteen accessions to the church. I don’t think that I have ever been nearer heaven since, and I am quite certain that my self-esteem never touched the high water mark of that meeting again. The meeting was held in a log school-house, and the school mistress joined. I remember that I had quite a sentimental appreciation of this lady, but owing to a mixture of prudence and bashfulness on my part, this sentiment was never cultivated. She died soon after. I could not wait until the meeting closed, but sat down and wrote to one of our papers that eighteen “noble souls” had united with the church, and “more to follow.” This letter, I found out afterwards, was wrong in two particulars. First, all of these souls did not prove to be “noble,” as I had stated, and secondly, the “more” never followed, at least in that meeting; and to this day those errors remain uncorrected in that paper. I may have fooled the paper, but I am certain I never fooled the church. It was some months before I quit reporting accessions as “noble souls,” “but when I became a man I put away childish things.” That was in my teens. But for disturbing the equilibrium of my stomach I would state some of the first compliments I used to hear of my work in those days. How God ever got me through so many snares without the loss of my soul is now one of my perplexing mysteries.

I did not baptize the converts of my first meeting, but had to those of the next, which occurred soon after in an adjoining county. There were six to baptize, and the place a narrow branch with steep banks. My plan was to begin on the least, but just as I got ready a man about six feet, four inches threw off his coat and vest, stepped down into the water, and demanded baptism. I was so confused at this unlooked for development that I forgot to take his confession. I was afraid to attempt the act. However, I hastily concluded that I could get him under the water, and that he was big enough to get himself out, so I began on him. The only thing that happened was, I baptized him. My first sermon was a failure, but my first baptism was a success.

Everybody who knew of the situation expected fun at my first marriage ceremony, but, while I had no experience on my side, there was enough on the other side to keep things level. The bride had previously been married three times, and the groom four. However, there were no legal impediments nor moral obstructions in their way. To make sure of things, I had written out and committed to memory a ceremony for the occasion, but in the supreme moment it all went from my mind. I made up one, impromptu, and the only error in it was that I pronounced them man and woman, a thing they already were, instead of husband and wife. But they “stayed married” all the same. On another occasion a young couple was ushered into my study room, with attendants, for a ceremony. In my agitation I knocked the lamp off the stand, and left us all in the dark. I don’t think I have received in marriage fees enough to pay me for all my sufferings occasioned by marriage ceremonies. I can not remember one that was not in some way painful to me—that is, I was embarrassed.

When I began to see converts whom I had baptized going back to Egypt, it gave me a new view of the work; I saw that it was not enough to get souls into the church, that the hardest work was to keep them there. My first meetings were so successful that I had about determined to be an “evangelist,” but this feature of loss changed my mind. I began then to make the “care for the churches” my study. I had been reporting how each church visited “had been ruined by the preacher who had preceded me,” “that my meeting revived the church” and “great good had been done,” and so on, but when I began to look back over the churches I was leaving behind, I found the trail was no better. The same coldness, divisions, inactivity and ruin prevailed. I quit evangelizing as a profession, and made the welfare of the church my study. A healthy church will grow without, as well as with, a professional revivalist. I am not opposed to this branch of church work; but I have seen churches ruined by revival meetings.

Another disappointment which overtook me in my ministerial life was the fact that I seemingly became more ignorant than wise in Biblical knowledge. At first I could take a text anywhere from Genesis to Revelation and preach a sermon (from it, of course). I could interpret prophesies, figure out mysteries, explain all the hard texts, and clear up the mysteries of Revelation; now I am trying to understand the fifth chapter of Matthew. My ignorance of the Bible is alarming to me now.

Like too many of our preachers, I ran into the shoal of debt. Ah, sad calamity! From not heeding a few plain, simple statements of the Saviour; and how painful the thought that one can not recall and undo past errors. One has so much to learn in life that its race is run ere we feel ready for the battle. I can see now that one can not serve two masters; that a soldier can not be entangled in his business; that boy preachers have childish ways; that aged men are the wisest counselors; and that converts must be cared for; that churches must be edified, rather than electrified.