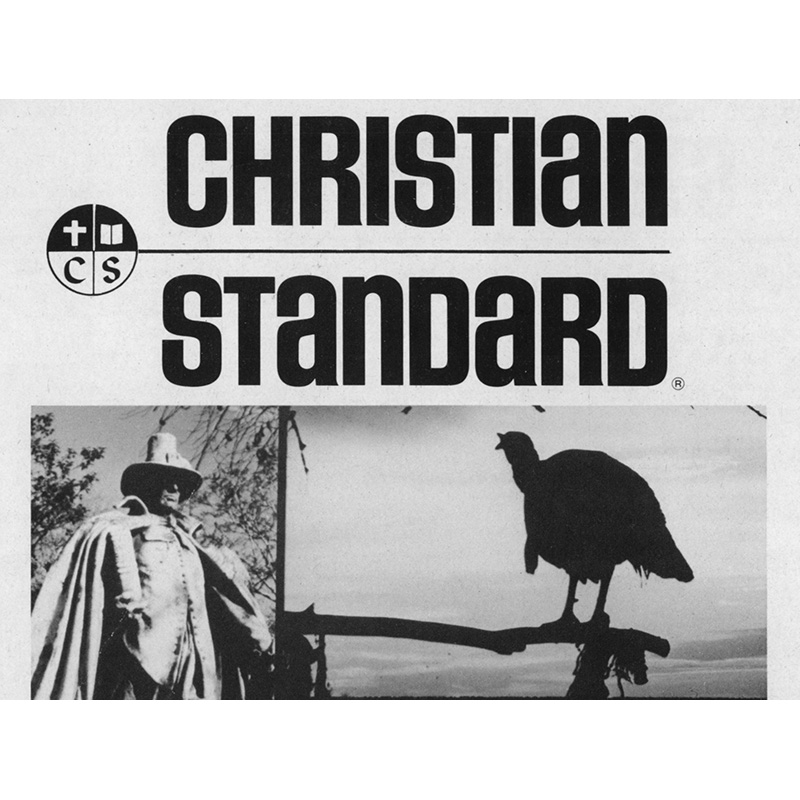 This is the first of two editorials that center on thanksgiving and the apostle Paul. This one, from Thanksgiving 1934, is by Edwin R. Errett, and was republished 50 years later.

There may be a monotony about messages on thanksgiving, but there was one phrase of whose monotony the apostle Paul was not afraid. In almost every letter of his that we possess, that phrase has prominent place: “I thank my God for you.”

Almost always the letter was to men and women of lesser Christian stature—men and women whom even the humble Paul could recognize as having failed to match his own Christian growth. But always, whatever were their merits and demerits, whatever their virtues and their faults, Paul was grateful to God for them.

And should it not be so with us all? Should our fellowmen not be themselves a very important reason for our gratitude? To be sure, we ought, first of all, to be grateful for God himself and for what He has done to make it possible for us to have fellowship with Him.

It was not without reason that Paul would be grateful for those Christians. His words are not to be dismissed as so much flattery. There was ground for his gratitude.

Those to whom he wrote—even the worst of them—helped him. They stimulated him. They gave him something great to live for. They demanded of him that he live at his best, that he exert his spiritual powers to the limit. They rewarded his effort—at least enough of them did to give zest to his living. They challenged him to make good himself. They gave him examples of courage and steadfastness in the midst of persecution and uncertainty.

Even when they criticized him, we might almost say even when they failed him and opposed him, they drew upon his reserves of patience and his argumentative power and his love so as to bless him and others—even ourselves. But they supported him. They prayed for him. They sent him every sort of assistance. They loved him and they made for him, the homeless wanderer, homes in all the ports of the empire.

They made his heart expand to take in them all, just as they made his prayers lengthen to give time for mention of them all. Who would not give thanks for those who would thus people one’s heart and enlarge it and challenge it and strengthen it by the very demands upon it?

And how is it with us? Is it any different? Can not we, too, be thankful for our preachers—even for those who do not measure up to our expectations? And for our congregations, even those who have demanded unusual patience and teaching and forgiveness? Assuredly classes can give thanks for teachers, and teachers for classes, that in one way or another have drawn out of us the best.

Those very fellow members who most have needed our help, our patience, our counsel, and our forgiveness deserve our thanks, could we but appreciate their effectiveness. Why, even the sinners, the ones whom we must work so hard to win, have done us some good, and God be praised that that is so.

And in our own homes there are many for whom to give thanks. Patience, tender ministry, sacrificial love, and even criticism—all these have gone into the making of our characters as they have been molded by the nearest of kin.

Fellow workers—thoughtlessly we thank God for this little assistance and that, for patience here and the bearing of a heavy responsibility there. But have we compassed it all? Have they not meant much more, in the entire spiritual reaction, than merely the part of the load they toted?

No, not every fellow being is helpful to us. Nor, indeed, is every helpful one equally so. That is not the point. Fellowmen, fellow workers, especially fellow Christians, despite all their faults and shortcomings, are—next to the Father, Son, and Spirit—the greatest reasons for our gratitude. Just to know and love and serve and work with people is itself abundant reason for thanks.

Next week’s archival piece on thanksgiving and Paul will be from 1924; it will again feature an editorial, one likely written by Willard Mohorter.