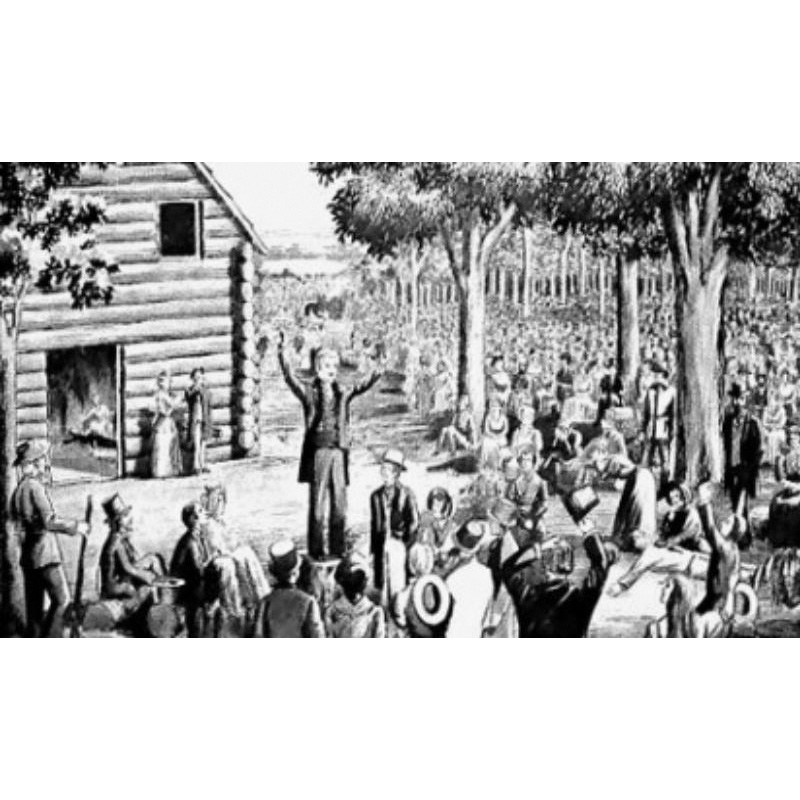 We continue this week with our second installment of Frederick D. Kershner’s look at Barton W. Stone from 1940. Though Kershner wrote his profile on Stone in three installments, we shared only a portion of part one last week; today we share the rest of the article originally published April 20, 1940.

“The Message of Barton Warren Stone”

BARTON WARREN STONE[’s] . . . life may be summarized under the following outline:

. . . THE EARLY CAREER of B. W. Stone was marked by rather unusual hardships and vicissitudes. Even down to the close of his life he was never a man who was able to take things easy or to enjoy even a moderate degree of comfort. He was by temper self-sacrificing, and had a generous character which on the frontier did not lead to material prosperity. There was a streak of extreme conscientiousness in Stone which never afflicted the Campbells. It seems perfectly clear that both Thomas and Alexander were not especially troubled over accepting the doctrine of predestination at the time of ordination, although they must have taken it rather lightly. We know from their later preaching and influence that it could never have meant very much to them. Quite evidently they were interested in other matters, which they considered of greater importance, and were content to allow John Calvin to exercise the nominal sway which was demanded by the church discipline. There was nothing hypocritical in this. It was simply a matter of emphasis. There were too many other things for them to concern themselves about to justify their wasting much time threshing out again the old straw of Augustinianism. Hence, they did not think it was wise to raise a row over the matter.

Not so believed Barton Warren Stone. Feeling sure that the Calvinistic teaching, to the effect that a certain number of people were predestined to be saved and that by the same token all the other people were predestined to be lost, was in error, Stone said so at his ordination, and refused to become a preacher unless the examining committee was willing to take him on his own terms in this much-disputed matter. One can not help wishing that he could have been present when this discussion took place. Stone was a young man, devout, fiery and sincere. The examiners would no doubt have been glad to have passed him with the perfunctory sort of acquiescence which was customary under such circumstances and to which the elder Campbell had conformed without any special moral scruples. Stone, however, was not content with such a simple solution of the situation. He wanted the staid and solemn Calvinistic elders to understand fully just where he stood before they made their decision. He did not want to begin his preaching career under even the remotest shadow of false pretenses. It was an extreme bit of conscientiousness which might have led to disaster, so far as his ministerial ambitions were concerned, but it was characteristic of Stone down to the very close of his life. He was always doing this kind of thing; always going the second mile in the matter of carrying out what he conceived to be right and to involve a problem of duty. With all this he was generous and kindly to a fault, and his extreme sensitiveness on moral questions never hurt anybody but himself.

The committee appears to have been struck by the sincerity and the manifest conscientiousness of the youthful applicant for ordination. Any one who is acquainted with the Scotch Presbyterian eldership knows that it is nothing if not hard-boiled in its acceptance of the historic covenants. It is no slight tribute to the personality of Stone that he touched these men with such a sense of his own inherent worth and mission that they were willing temporarily to waive the ancient standards of the church in the interest of permitting this new prophetic voice to be heard. The result was honorable to all parties concerned. Stone began his ministry entirely open and aboveboard, and the elders rendered the church a far greater service than they could have dreamed when they gave their voices in favor of the ordination. Like many other important events in world history, the whole matter must have seemed rather trivial when it occurred. . . .

BARTON STONE’S early history will always revolve around the name of Cane Ridge. In the history of religion this comparatively insignificant locality has assumed scintillating importance. Students of abnormal psychology, as well as investigators in the field of religious suggestion, turn to Cane Ridge. . . . Stone himself has helped to foster this interest by recording in his autobiographical journal what happened. There was nothing especially unbalanced about him and he does not appear to have looked with an especial enthusiasm upon the abnormal phenomena which will always be associated with the name of Cane Ridge. Apparently he had nothing especially to do with producing “the jerks,” so far as his own preaching was concerned. If he had any power along this line, it must have left him very early in life. Nowhere in his later career do we read anything about his ability to induce such peculiar behavior. . . . Stone, so far as the record goes, never had people fall down unconscious after the Cane Ridge days, nor did his congregations indulge in the jerks. [Read more about “the jerks” at the end of this essay.] It seems probable that some one or more of the other revivalists (Stone’s journal tells us that there were generally four men preaching at the same time in different parts of the grove) may have been responsible for the extraordinary behavior of the audience. The fact is that while the revival undoubtedly helped moral and religious conditions on the frontier immensely, it was not entirely satisfactory to the young Presbyterian evangelist.

The doctrinal scruples which led to his refusal to be ordained on the customary terms . . . were not lessened by his experience after the Cane Ridge revival. Stone became convinced that the old Calvinism was altogether mistaken, and that it needed to be replaced by a more tolerant and sympathetic outlook. There was not enough of the love of God in it for him. The Deity was represented as too much of an absolute monarch in the old Roman fashion to suit this child of the American Revolution. . . .

Restoration Movement historian James B. North offered a description of “the jerks” and other “religious exercises” in his 1994 book Union in Truth (Standard Publishing).

Probably the most controversial aspect of the frontier meetings was the “religious exercises.” Stone devotes an entire chapter to these in his autobiography. The most common exercise was probably the “falling exercise.” . . . A person fell, often with a piercing scream, lay unconscious for some time, and then came to, relating his love for Jesus and urging the hearers to repentance. The “jerking exercise” was more complicated. People were seized by a series of “jerks,” violent muscular convulsions. Documented stories attest of people standing flat-footed on the ground with their whole body jerking back and forth so violently that at one end of the jerk, the forehead almost touched the ground in front, and at the other end of the jerk, the back of their head almost touched the ground behind.

North continued, “There is no doubt that Stone took a sympathetic view toward these religious exercises. He acknowledges that there were eccentricities and fanaticism, yet he also insists that much good was done and the exercises silenced sectarian contention by promoting unity.”